Which of these Disney live-action remakes of their animated films is your favorite?List: https://www.imdb.com/list/ls046229099/

Christopher Robin by far!  Cinderella was good, too, but they are the only good ones in my opinion.  :)

It's a rare case when my opinion totally follows and succeeds in rank the public rating as well as the critics'... The Jungle Book (2016)Dibyayan, since upcoming Aladdin is in your list, I suggest to include also:

The Jungle Book has a live-action human character. The Lion King presumably does not. I don't think Lion King should be included even when it is released.

The other films should not be included until they are released.

What about the upcoming 'Lion King'? I heard it is a live action remake of the 1994's animated original.

Some call it that, but I think Wikipedia probably has it right when they say it's actually animated. IMDb also currently has it listed as Animation.

For your attention:Animation: Genre versa Visual effectsthe genre may be changed after release. PS: may be Wikipedia know more than the trailer shows )))
But they have not watched the movie yet for sure.

Christopher Robin is not really a remake, is it?

The film is a remake of Disney's Winnie the Pooh franchise. Not a particular film, of course. Should I remove it?

I'll mention the names of the original movies in the description of each options. Will be very helpful for the voters.

No, don't remove Pooh.  :)  I think we should be careful not to take this poll too seriously.  We could sit and talk about how CGI is just animation or how Christopher Robin is more of a sequel, but it does no good.  In my opinion, as long as everything in the movie looks real and non-cartoony, (The Lion King may be animated CGI, but you try training animals to talk, lol!) it's live action.  These days CGI ﻿is ﻿live action.  Unless there's a human character who is fully hand drawn or even cartoonishly computer animated, it's live action.
Hope this helps.  :)

Narni, this time you penetrated into my head, and then flashed out with a necklace of pe.. words that could not be better to express the whole thing )))

This is my poll suggestion  PS: Best Live-Action Movie Re-Imagined From A Disney Animated Classic? from 7 months ago (last year). It is nearly identical other than best vs. favorite and both have a similar answer group of thirteen options.

DC, I find it interesting the courtesy you want extended to you, isn't returned in-kind? I have seen you post hundreds of posts like this over the years. It seems you have certain expectations of others. Yet, I can't even get the courtesy of a response or an explanation. 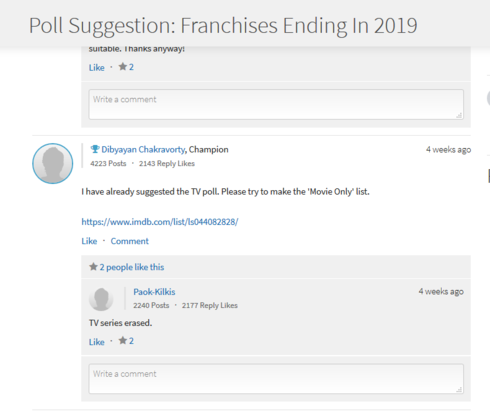 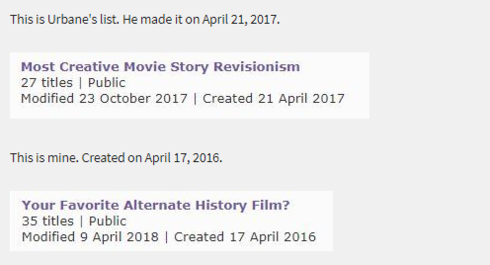 Even, I commented on your PS thread about my suggestion. Did you delete/remove your PS? No, you kept it until it gets picked up.

Were you talking about "courtesy"?

D.C.,  First, you have a tendency to think every poll suggestion even remotely on the same topic infringes on a prior poll suggestion of yours. Secondly, it didn't include ignoring a post or a concern of others. In this case, I promptly responded that I agreed that the titles were too alike. But, I also thought a favorite poll vs a poll that focused on the most creative re-telling were two different things. Also, I stated that I thought the answer pool was only vaguely similar with an overlap of about a third. It is like asking which is your favorite food and which food is the most sweet; just because they are both about food doesn't make them the same. I told you why I thought it was different and made an effort to make it even more dissimilar. In this case, you asked a favorite vs. a best question (essentially the same) and had an similar pool of answers with 12 of the 13 of the same movies (essentially the same). Courtesy means the showing of politeness in one's attitude and behavior toward others. I don't think it is discourteous to disagree and be able to able to back it with facts and reason. I also don't think it is discourteous, when you have a dialogue, make an effort to accommodate others' reasonable concerns and resolve the issue.That said, I still think as constructed your poll is too similar. But if you make it more dissimilar by asking a different and unique question and altering the answer pool a bit, it could be correctable. As to the question, I leave to you to come up with a unique spin, which may or may not change the answer pool. We both probably based our poll suggestions on the same Wikipedia list:  List of Disney live-action remakes of animated films - Wikipedia. i was even going to use the same title as you, but realized it was inaccurate and changed "remake" to 're-imagined" to be more accurate. If you are focused on remakes only, I think you need to remove four of your poll answer options anyways. A remake movie is a movie that has been filmed again and is re-released, but tells basically the same story. A sequel movie is a movie that continues the story or develops the theme of the earlier movie. 102 Dalmatians (2000) is not a remake, it is a sequel to 101 Dalmatians (1996). However, it is a remake of 101 Dalmatians (1996). Alice Through the Looking Glass (2016) is not a remake, it is a sequel to Alice in Wonderland (I) (2010). They are based on two different Lewis Carroll fantasy novels, Alice's Adventures in Wonderland and Through the Looking-Glass, Christopher Robin (2018) is not a remake, it is not a sequel either (IMHO). It might be better described as follow-up or related work to Winnie the Pooh (2011). Maleficent (2014) is not a remake, in the truest sense, it would be fairer to describe it as an alternative POV movie to Sleeping Beauty (1959) "The film portrays the story from the perspective of the eponymous antagonist, depicting her conflicted relationship with the princess and king of a corrupt kingdom." Just like, Wicked (2021) is not a remake, in the truest sense either, it would be fairer to describe it as an alternative POV movie to The Wizard of Oz (1939). Like the Lewis Carroll fantasy novels, they are based on two different books: the Gregory Maguire's 1995 novel Wicked: The Life and Times of the Wicked Witch of the West, itself an alternative POV telling of the classic 1900 novel, The Wonderful Wizard of Oz by L. Frank Baum. I think of them as two different franchises with the October 18, 2019 release Maleficent: Mistress of Evil (2019) being the sequel to Maleficent (2014).I would have no problem endorsing your poll suggestion, if you made three simple changes: 1) create a dissimilar spin/scope, 2) a different question and 3) an appropriate answer pool that varied at least slightly. It would seem like, if you delete the four options, you only need a unique question to ask. Also, with an upcoming string of live-action planned projects,  I am sure the chance to get it published will present itself in the future.

I was going to make the complex of suggestions to rule this situation to the better for all, since not only two poll-makers are involved here. Unfortunately, one of the polls is fast to live now. It's a mess, because the name and description of the DC's poll is much better and clearer for understanding (maybe it's a reason why suggesters' attention was in fact divided), so he could be mentioned as a suggesting person. And may be for the two options also: https://getsatisfaction.com/imdb/topics/poll-suggestion-your-favorite-disney-live-action-remake-of-a...https://getsatisfaction.com/imdb/topics/ps-best-live-action-movie-re-imagined-from-a-disney-animated...https://getsatisfaction.com/imdb/topics/ps-best-live-action-movie-re-imagined-from-a-disney-animated...Moreover, finally the two persons (NarniaisAwesome and MAthePA) are in fact ignored with their suggestions for this specific kind of poll. (Nothing new in this world)

PS: sorry guys, I'm too busy today with real-life matters, so may be late with possible replies if any.