Poll Suggestion: Which of These Film Villains Would Terrify You Most in Reality?

All movies, no matter the genre, have villains. Some of them can be pretty scary and nasty. Luckily, there's always a screen separating us and them... but what if there wasn't? What if they were real? Which bad guy (or gal) would ruin your day?  Link to List:  https://www.imdb.com/list/ls029075725/

Hi NarniaisAwesome,Thank you for your poll suggestion.Please include a discussion link in your list.

Now to my comment: What!?! No Joker? He will kill you for a laugh.
And what about the madusa thing Jadis has going with her wand? You forgot to mention that in your description of her. She turns people into stone statues.
Wait a moment ! Medusa! You came use her from any one of the Greek mythology based movies that has her but I prefer the one from “Percy Jackson and the Olympians: The Lightning Thief” https://www.imdb.com/title/tt0814255/...
But from your current list, the most scary one is the madman with power and authority - The Queen Of Hearts.

Yes, I added my link.

I think the worst is the Wolf... speed and hunger!  But the Queen is freaky, too.  Yes, I forgot to say Jadis is so powerful!  I think I will add more to the list soon!  Thanks for commenting!

I wouldn't want in any case to be the prey of a Predator.

But if you were, just remember that there's one way to escape them - get to a choppa!

I will add more later when I have more time.  :)

Bump!  Forgot about this post until recently - added Col. Tavington but didn't add LBJ or Nixon - the point of this poll is fictional characters.

That poor girl is not a villain :(

Will add Pennywise... since Carrie is a little "misunderstood" I think I can leave her off.  :)

Ammon Göth - Unscrupulous Menslaughter. He lead an industrial killing camp. He had no problem to kill without cause, just for his fun. He had no inhibitions.https://www.imdb.com/title/tt0108052/mediaviewer/rm991530496

Ok, Carrie was not really a villain.
She gets mitigating circumstances for being forced into the manslaughter. ;)

Ra's al Ghul - Commander of the society of the shaddows. He has plenty of Ninjas around you, you can't see - for killing you fast and silent while he speaks to you.

Cohaagen - He would erase your memory and reload it new for his evil planshttps://www.imdb.com/title/tt0100802/mediaviewer/rm367531520

Sorry just read in my translator that 'to be fond of' means you love something.
My bad English skils. ;)

Thanks, Breumaster, lol!  I just couldn't click on a pic of a shark that takes up my whole screen... somebody would end up called the paramedics, lol!  :D  Again, thank you.

Breaumaster and NarniaisAwesome, as NarniaisAwesome you yourself had said, “the point of this poll is fictional characters.” That means Ammon Göth, however you spell his name ( many references spell his name differently), has to be deleted from this list because he was a real historical person. Here are just three of many references that say that he actually lived:
- http://www.auschwitz.dk/goeth.htm
- https://en.m.wikipedia.org/wiki/Amon_...
- https://www.britannica.com/biography/...

Please remember, the film “Schindler’s List” is not fictional.

Sorry I don't always read the whole discussion. So far I didn't read that it is a poll about only fictional villains. If it would stand in the intro as a criteria, I would never have suggested Ammon Göth. He was more beast than man. I can only detest such bad people! dgranger is right about Göth and it's good, you took him off the list. 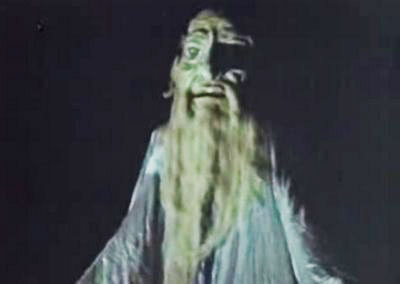 Hey, never saw Silence of the Lambs or Halloween... can someone give me a short little phrase about the villain to put after Hannibal and Michael?  :)

Hannibal Lecter is a psychatrist who turned to a psychotic serial killer. He cooks, serves & eats unpolite people and is of outraging cleverness and self control.Michael Myers is a weird psycho who kills people for his excitement. He first killed his sister when he was a kid about 6 years. After several years in an asylum he escaped as a grown up and searched for further family members. His beloved objects for killing are knifes.You should watch 'Silence of the lambs'. For even today it's a high tensioned movie for everybody who doesn't know yet. Might it be, that you are still younger?

Please be aware of R-rated movies. If you are not 17 years of age or older: Then please ask your mother and/or fatherbefore watching 'Silence of the lambs' or 'Halloween'.

Breumaster sometimes children are more then able to handle R-rated movies. I've seen Videodrome (1983) and A Nightmare on Elm Street (1984) at the age of seven. Neither of them taumatized me a bit at that point.

I mean, both times my parents were aware that I was watching those movies.

Nikolay, I know what you mean. The point is that NarniaisAwesome seems to be young and I don't know how young. So I'm guarded with doing the right thing. Here I'm writing comments on a server in a foreign land. It's about society rules. I guess  you understand. :) Sometimes I forget that some people in the Internet could be younger than 18 years.

Thanks, guys, for being concerned about me.  :)  I've only seen a couple R movies in my life, all with adults, and even those were older and not rated R for too awful stuff.  For horror/violence, PG-13's my limit.  :)  That's why I asked for the sentences.  Not about to watch those just for that, lol!  Thanks!  P.S. The best scariest movies I've ever seen are The Birds and Big Bad (2016).  Big Bad is independent and semi-corny, but creepy.

Never said how old I am... not really comfortable giving that out, you know how it is, but I will say I didn't see Ozzie and Harriet when it was first on, lol.

NIA:
It's good you don't tell too much on the internet.
I was a little astounded, too.

NIA:
It's good you don't tell too much on the internet.
I was a little astounded, too.

LOL indeed! ROTFLMAO! The Cowardly Lion vs Aslan, a lion with godlike powers. Do you seriously wonder who is going to win that fight?
And don’t try picking on me. I got a whole lion pride to defend me: Simba, Mufasa, Kovu, and Bagheera ( the panther from any version on “The Jungle Book”)
And since it is widely known it is the lionesses who do the hunting in a lion pride: Nala, Sarafina (Nala’s mother), Sarabi (Simba’s Mother), Kiara, and Elsa (from “Born Free”).

Hey, you all have given me an idea for a poll!  Fictional Armies of the IMDb Poll Board Post here: https://getsatisfaction.com/imdb/topics/poll-suggestion-fictional-armies-of-the-imdb-poll-board

This post has two parts: a serious and a fun part. First the serious. NarniaisAwesome, a question, if you are using “The Jungle Book”, why have Kaa when you can have Shere Khan? Everyone is scared of him. And in “The Jungle Book 2”, I think he had definitely got over his fear of fire; thus, making him more dangerous. George Sanders: https://www.imdb.com/title/tt0061852/...
Idris Elba: https://www.imdb.com/title/tt3040964/...
Sanders was more sinester than Elba’s brute force.
Also it inspired another idea for a poll. The Disney remake of “The Lion King” is coming up. So I got the idea for this: Lion Kings, Tigers, and Bears, Oh My!. Check out the list and see who got credit for a suggestion without even making a post for a get satisfaction page for it yet. (That has to be created which is going to happen shortly.)

Well, I don't know the Jungle Book very well, lol, so I forgot about Shere Khan.  I will add him, though.  :)  Thanks!  Will check out you list!

Now for the fun part.!
Ooops, I forgot one to add to my pride, Vitani from “The Lion King 2: Simba’s Pride”. Vitani can you believe such a great character as her, her adult character was not listed in the film’s credits? She is a major part of the story since not only she get redemption, (you got to love characters that start out evil and then turn good), she is a fierce fighter, she was sort of Kovu’s protector, and spy, and she realizes that Zira had lied to her about Simba. She is the one who says this great line,< blockquote>”Adult Vitani : No, mother. Kiara's right.
[walks over to Kiara's side]
Adult Vitani : Enough.”
Now, Ed, Jones, if that wizard is the one I’m think of, if I remember the movie and the book “The Wizard of Oz” right, and I do have all fourteen of Baum’s Oz Chronicles books, that wizard has no power because he was a humbug and a fraud. The one you should have taken was the big magical power in Oz, Glinda, the Good Witch Of The south (she rules all of the south part of Oz). But since you didn’t take her, I got her along with Merlin (always start with Merlin), Gandalf, Harry Potter, Hermeine, and Dumbldore for starters.

https://www.imdb.com/list/ls043246709/
https://getsatisfaction.com/imdb/topi...
Try now. I must have left it on edit. When that happens, nobody can click on it except me.

I have a bit of a recurring unexplained fear of seeing a face where it doesn't belong, especially a giant one in the window or above the cityscape. I would say that Parallax from Green Lantern (2011) strikes all the right cords in that regard. Film might be flawed a tiny bit, but this thing is really quite terrifying.