Poll Suggestion: What is Your Opinion on "Last Action Hero?"

In 1993, a new Arnold Schwarzenegger film hit theaters: "The Last Action Hero." It was an action/comedy that was "self aware" of cliches in action movies (and movies in general). It also broke that 'fourth wall.' It did poorly financially, mostly because it was competing with a certain Spielberg dinosaur film of the same year.

Ever since, critics and viewers have had mixed feelings. How do you feel about it?
Link to List: https://www.imdb.com/list/ls046981711/

Well, I can at least say that Charles Dance and Ian McKellen stole the show, the former especially!

I think the Video Store clip is super funny, lol!

I think you should put 5 options, you know. My opinion about the movie:It's a movie that was a profund connection to me. It was part of my childhood. Altought that, the movie isn't a great movie, for me it's a good movie more in the perspective that entertains, if you look on technical aspect it isn't that good but in balance of these two factors. It's a 7.5/10. Underrated.The link to GS isn't working because you put wrong the link.(link that you have): https://getsatisfaction.com/imdb/topics/poll-suggestion-what-is-your-opinion-on-the-last-action-hero (the problem is with that "the")Right Link: https://getsatisfaction.com/imdb/topics/poll-suggestion-what-is-your-opinion-on-last-action-hero

I enjoy it, it has it's plot holes but it's fun.

I totally agree!  Movies now are either really stupid or really serious.  It's nice to have a movie that's just... enjoyable!  I still think that characters are developed well and you kinda care.  :)

Thank you all!  I will fix my link!

On a side note, The Fast and the Furious cinema franchise is guilty of just about everything at which Last Action Hero pokes fun, so certain cliche thematic elements have stuck with cinema for at least eighty years. The CinemaSins' review of Fate of the Furious had be cracking up in laughter. I also appreciate Cracked's critiques of cinema. The subject material goes beyond "suspension of disbelief" because there are physical occurrence depicted in movies that violate the laws of physics or otherwise present implausible behaviors of established technology (like the exploding air tank in Jaws), but which the average person would be unaware. This is all part of the ambiance of the mainstream action genre. 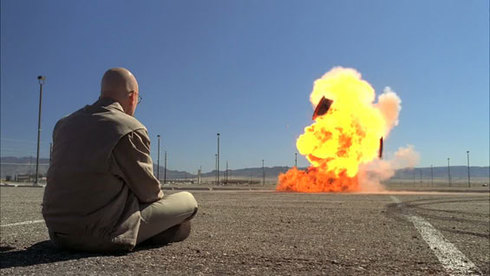 As seen on Breaking Bad...

I tried to compact all my thoughts in that review, having watched it at the right time and the right moment, I couldn't believe how ill-received and misunderstood it was.

Stupidity stops where its own awareness starts ...ElMaruecan8226 September 2013I believe that principle applies for both people and movies. And this is why parody generally provides the cleverest films, mocking the archetypes over-exploited by lazy directors with a subtle, and so engaging, wink to the audience.And "Last Action Hero" parodies the action-flick, featuring its most iconic ambassador, Arnold Schwarzenegger as the lone-ranger bad-ass cigar-smoking titular hero of a never-ending franchise: Jack Slater. As if he was plenty aware that "Die Hard" put a deathblow on the credibility of such super-heroic figures popularized by "Commando" and "Predator", John McTiernan becomes the iconoclast of his own creations -a demonstration of smart sense of humor a few directors ever achieved.The opening "Jack Slater" film even concludes with a reference to the genre-defining "Die Hard", using the same score to contribute to the whole 'inside joke' effect, completed when Jack Slater becomes a movie-within-a-movie character, from the perspective of Danny, his number one fan, played by Austin O'Brien. Basically, Danny is to "Last Action Hero" what Cecilia (Mia Farrow) was to "The Purple Rose of Cairo": a movie lover whose only means to transcend routine's banality was a constant ecstatic stare toward the silver screen. And being a kid of the early 90's, I could only respond to his hypnotic fascination.Action films are indeed the best pop-culture fillers, crystallizing the most common denominators of fun and entertainment and generating codes and formula that are part of cinema's timeless and universal heritage, no matter how overused they are: the never-dying hero, the yelling superior, the revenge plot, the villainous monologue, the sexy daughter, the comic-relief sidekick, the sophisticated boss' right hand who becomes the real villain and a lame catchphrase. They're all there in "Last Action Hero" less because they're obligatory but for the necessity to turn them into derision, by confronting them to reality.Still, there has to be some fantasy in this reality: Danny is given by the projectionist Nick (Art Carney) a magic ticket that belonged to the Great Houdini. And while he watches the fourth opus of Jack Slater's adventures during a private screening, the ticket glows, sticks of dynamite are thrown from the screen and land near his feet. Danny starts to take the notion of 'danger' less cynically before the explosion immediately projects him into his hero's universe. The film's greatest moments come from Danny's desperate attempts to convince Slater that they live in a movie where phone numbers start with "555", video-store workers are sexy and profanity is prohibited. Hell, in this parallel universe, his own rival Stallone played the Terminator roles (which made me wonder who then played Rocky or Rambo).The film recycles every cliché in such an over-the-top way it's hilarious: the car rams into an ice cream truck and explodes, a henchman gets an ice cone on the neck, many gags feel like these 'McBain' segments from "The Simpsons", thus never fail. The film also features one hilarious modernization of "Hamlet" and two delightful movie references. One of Slater's friends is played by F. Murray Abraham, naturally, Danny warns him that it's the same guy who killed Mozart in "Amadeus": the film that got 8 Oscars. For a kid, he has the knowledge of an IMDb user, which says a lot about "Last Action Hero" exhilarating effect as pure geek escapism, reinforced by the obscure intrusion of Death from "The Seventh Seal", a joke I didn't even get when I saw the film as a teenager.Now, there are two facts regarding "Last Action Hero": the film flopped, and it didn't deserve to, not when box-office laws are governed by rules that allow "Cliffhanger" to be the 7th highest grossing film anyway. Therefore, I can only qualify its bombing as 'accidental', the same accident that made "Sorcerer" flop in 1977. The parallel is all the more eloquent because "Last Action Hero" suffered from an ill-fated opening coinciding with the big event of 1993: the release of Steven Spielberg's "Jurassik park" ("Sorcerer" had it worse with "Star Wars") and perhaps misleading title, trailer and word-of-mouth that branded the film in the total opposite way it expected to: a dumb action film, 'another one'.I don't blame the viewers who thought a bunch of reptilian carnivores would be a fresher spectacle, I, was misled too, the first time I saw the TV announcement. But being a box-office flop is one thing, but when I started to examine the disastrous reception –from those who actually saw the film- I was stunned. Seriously, what's with all these Razzies' nominations? Worst actor? Arnold had to play his usual role. Worst screenplay? Check the review's title. Worst new star? That's the worst thing about vocation-discouraging Razzies: the kid was supposed to be annoying and he played that part quite well. Worst song? It's a cheesy action-flick, did they expect Barbra Streisand? "Last Action Hero" is not beyond criticism though especially in the last act, when they 'get' in the real world. It's true that the film could have pushed its self-reflexive concept to more thought-provoking levels, that the emotional involvement lacked when the action was conditioned by predictable plot devices and needed to be compensated in the 'real world'. It's also true that confronting Slater to Arnold (like in Woody Allen's film) or having Danny talking to him, could have induced more interesting situations, but the reception would make anyone believe the film is like "Stop or my Mom Will Shoot!".Talk about unfortunate misunderstanding, not that I believe it truly deserves this 8, but it makes up for the undeserved negativity it inspired. McTiernan would finally make the highest-grossing film of 1995: "Die Hard 3 With a Vengeance" which feels like his personal vengeance. The film is as corny and over-the-top as "Last Action Hero" but I guess the average audience wasn't ready for that level of subtlety, so he probably thought : "Hell, give them the movie they deserve and give me a break".

That word "escapism" is a good way to explain what certain action hero movies have.

Great review although I don't agree with that bit -

And this is why parody generally provides the cleverest films

because so many parodies don't mock archetypes but specific movie scenes, and often good ones.

True, I guess I meant that many clever movies are parodies but not all parodies are clever, the best parodies don't mock a specific film and that's how you can spot them, I just laughed my **** off discovering Road to Morocco, I don't think it makes fun of a specific film, but it was hilarious.

I added another answer to the poll.  Hope it makes sense!

Hi,Please edit the title to: What Is Your Opinion on 'Last Action Hero?'If you want, you can link the movie in the intro like this:
[link=tt0107362]

Please make the changes that Jessica suggested above.

Hi!  I'm sorry, I don't quite understand: my IMDb list title already does say, "What ﻿I﻿s Your Opinion on "﻿L﻿ast Action Hero?"  What should I change?  Thanks!

I believe I have corrected this right.  :)