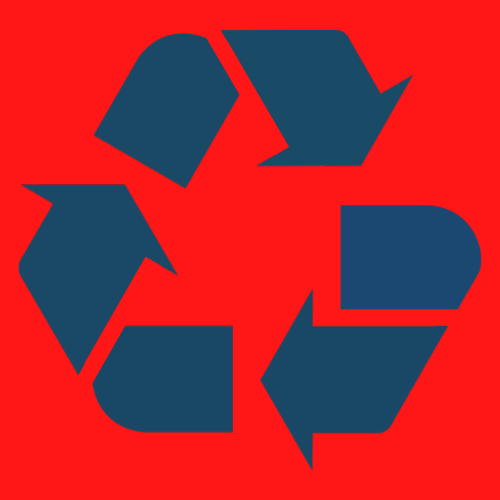 Poll Suggestion: Should alternate cuts get their own IMDb title?

I've created a list of movies that have a director's cut, but not their own IMDb title. (The list is incomplete, but includes most of the most known alternate cuts.)

So far the only two separate IMDb titles for the same movie I am aware of are "Superman II" and "Justice League".

Should these movies have separate IMDb titles for their alternate cuts?

Probably not, as this is a slippery slope. Where do you draw the line and what if there a lot of alternate cuts. Plus, its seems the stream of updated versions could be endless. I get that depending on the version an indivdual's opinion of a film could widely vary.

Francis Ford Coppola is an interest example of this issue as his Apocalypse Now film has a single listing, but his Godfather trilogy has five listings. 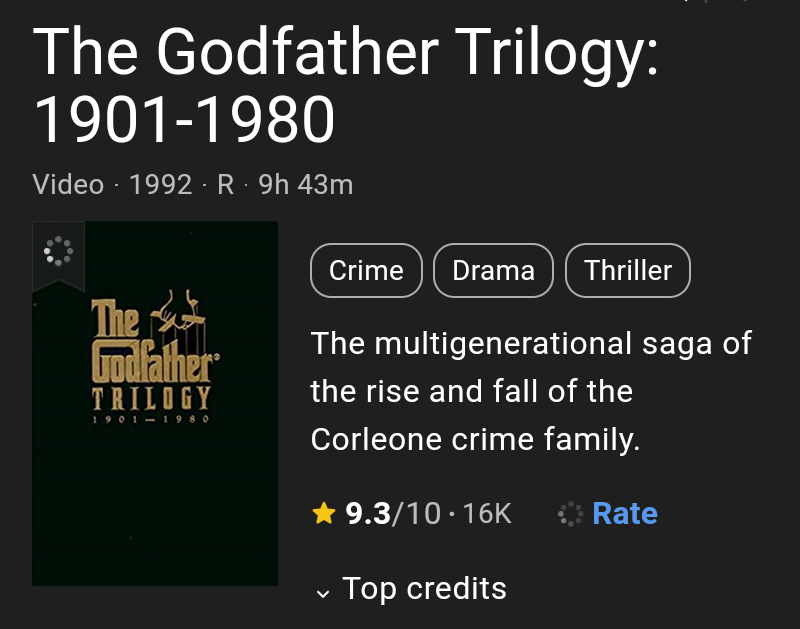 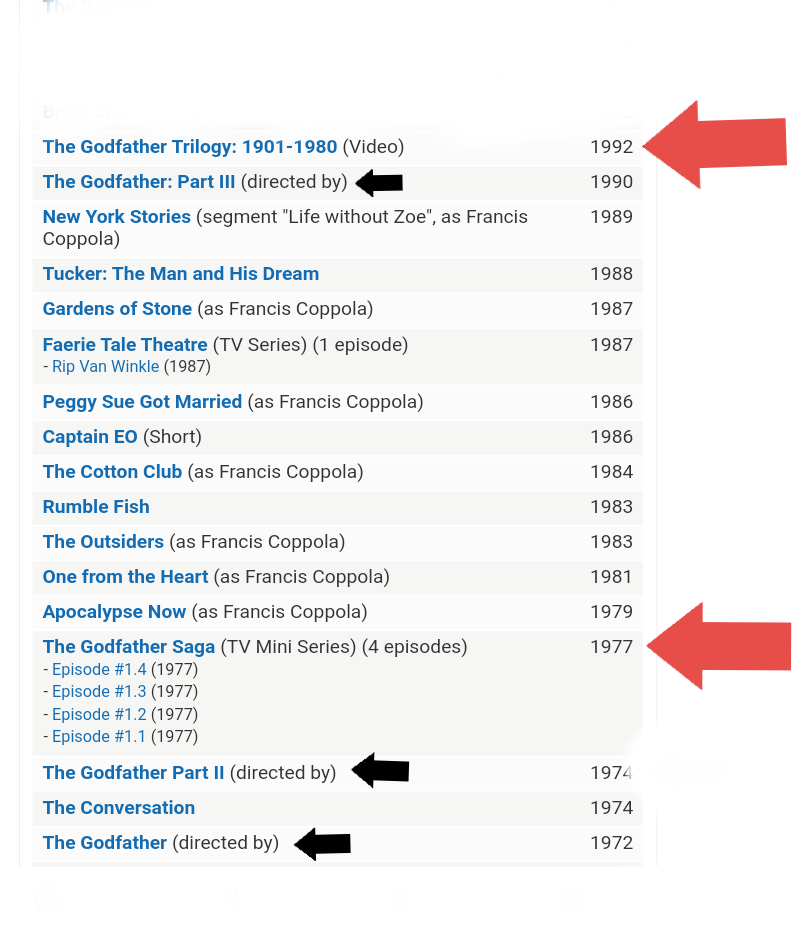 I think his Apocalypse Now had a second IMDb listing for Apocalype Now Redux at one point. It has since been removed. There seem to be at least six different cuts of this movie that were distributed in some form. Beyond filmmakers need to tinker with the cut, the number of reissues and restorations due to format updates: VHS, DVD (SD) , Blu-Ray (HD) , 2K and 4K means these changes will be  endless, in theory. 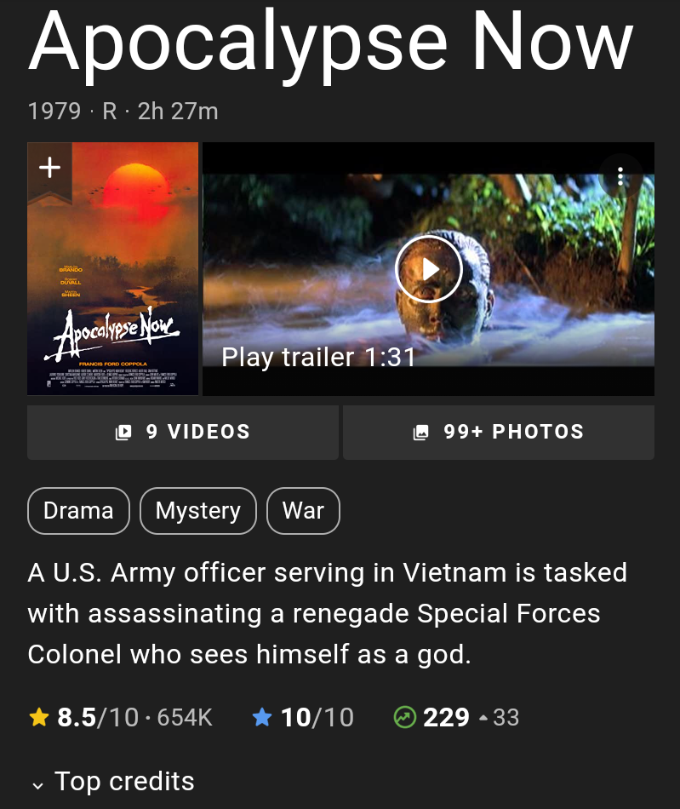 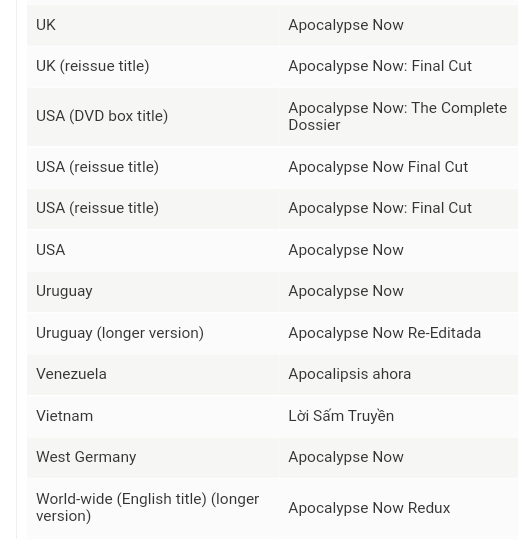 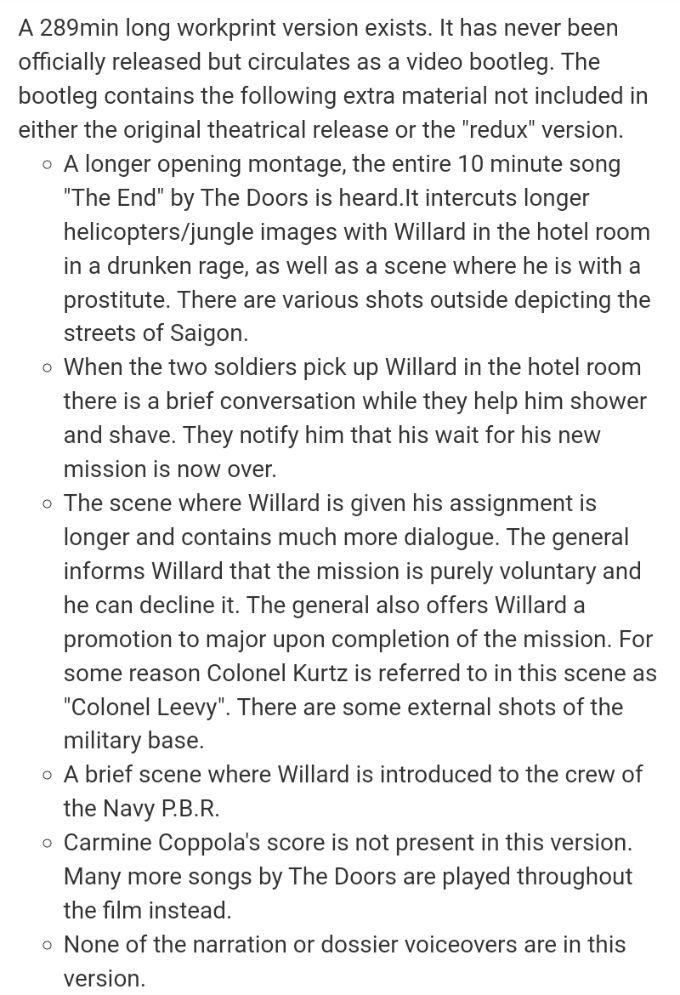 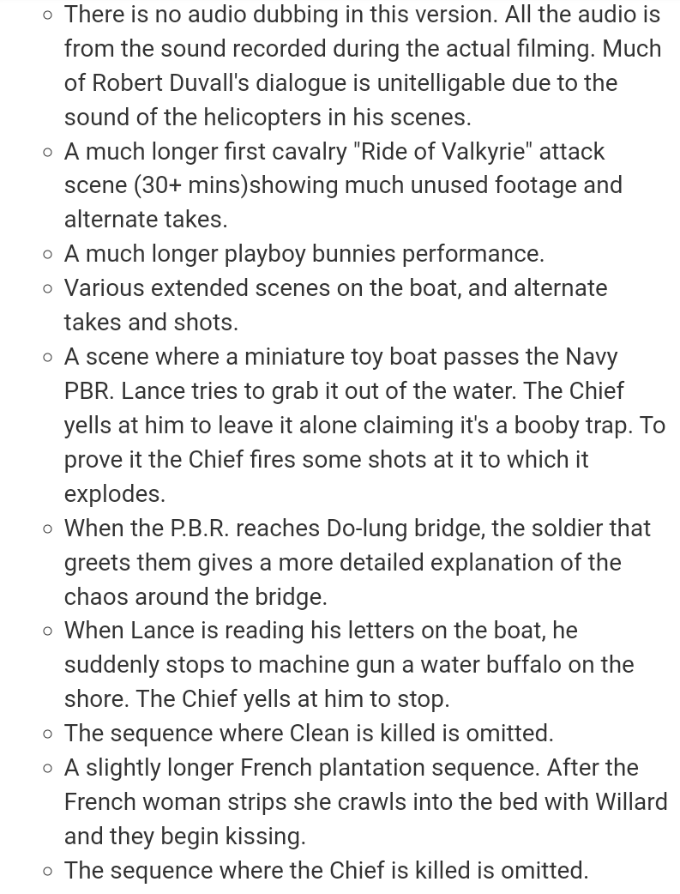 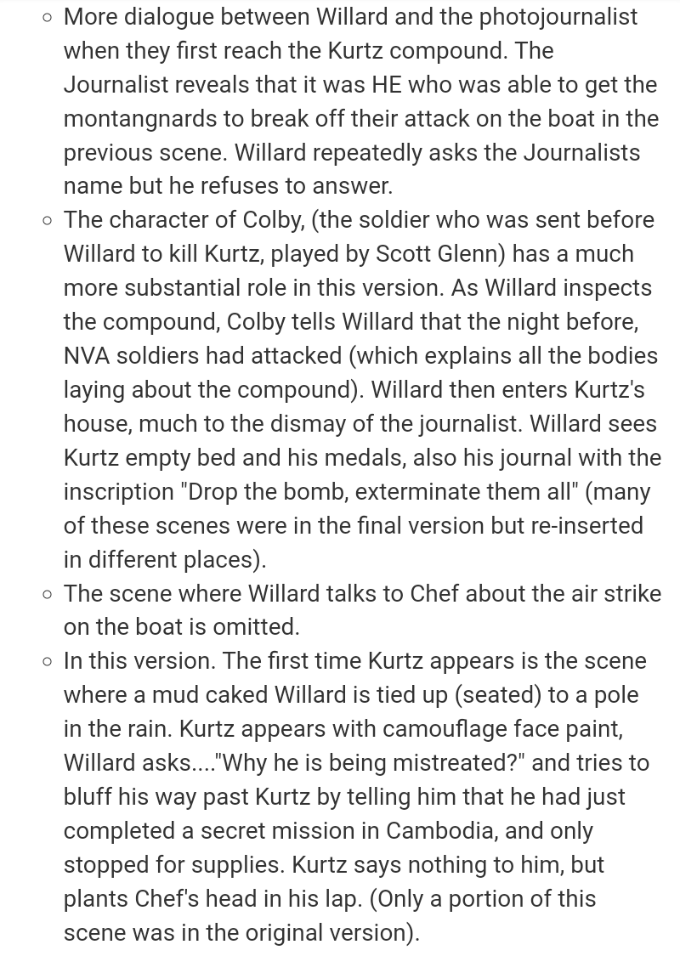 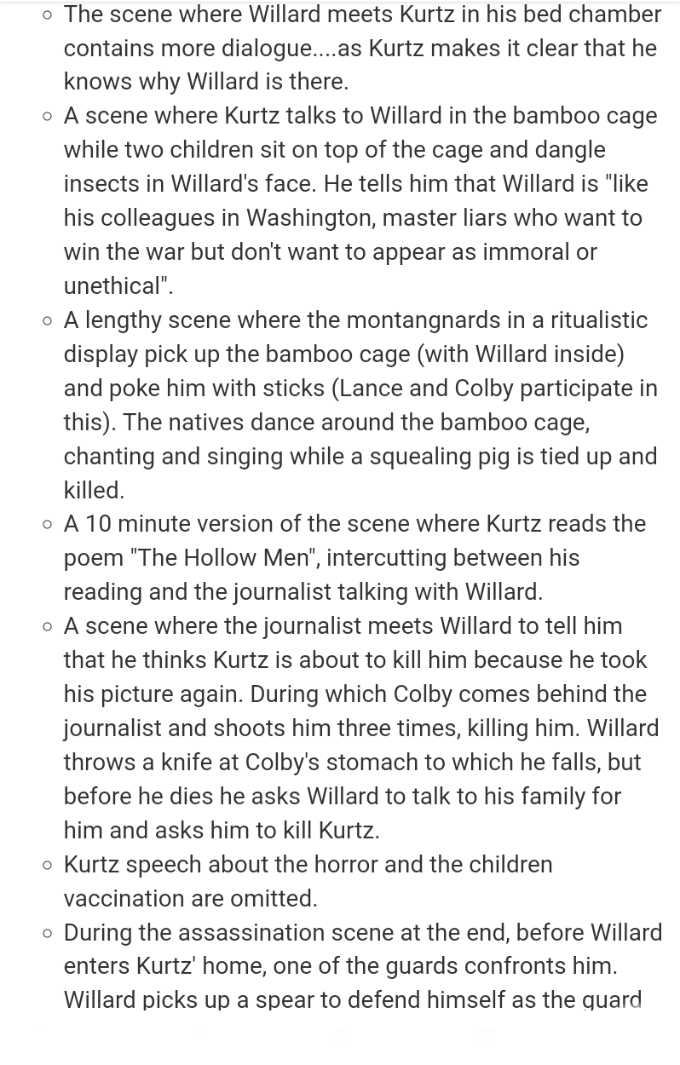 Plus, it is common to recut TV series and turn them into theatrical films (ie Ingmar Bergman's Scenes from A Marriage (1974)) and visa versa (ie Wolfgang Petersen's Das Boat (1981)). These two movies were Oscar nominated nine times; which is impressive for a pair of movie titles made abroad and are in a foriegn-language. Both have separate film and TV series IMDb listings even though they are cut from the same footage.

Welcome to the Poll Board Geekofriendly. And thanks for your suggestion.

If this is selected as a poll, each item in your list will become an option for people to vote on.

Therefore, with you current list it is not possible to answer your question, as it only allows a Yes/No answer.

You have two options.

Either change the question to which of these movies should have its alternate cut added as a separate title in the IMDb?

Or make a new list that only includes two options: yes and no.

To do this, you can select two titles with that name in the IMDb such as: Yes and No

I say yes, because another cut may change the whole movie completely. A masterpiece can be trash then. And also trash may be a masterpiece afterwards (unbelieveable, but possible). It might change the character of the movie - so yes, please mark it! '... (the "xyz" cut')

Variety said in its original 1957 review: "Touch of Evil smacks of brilliance but ultimately flounders in it. Taken scene by scene, there is much to be said for this filmization of Whit Masterson's novel, Badge of Evil. Orson Welles' script contains some hard-hitting dialog; his use of low key lighting is effective, and Russell Metty's photography is fluid and impressive; and Henry Mancini's music is poignant. But Touch of Evil proves it takes more than good scenes to make a good picture."

The film was re-cut, based on Orson Wells editing notes in a 58 page memo, and re-released in 1998. The result elevated the film status to that of a widely considered cinematic masterpiece, when it was re-cut to honor the director's original vision. 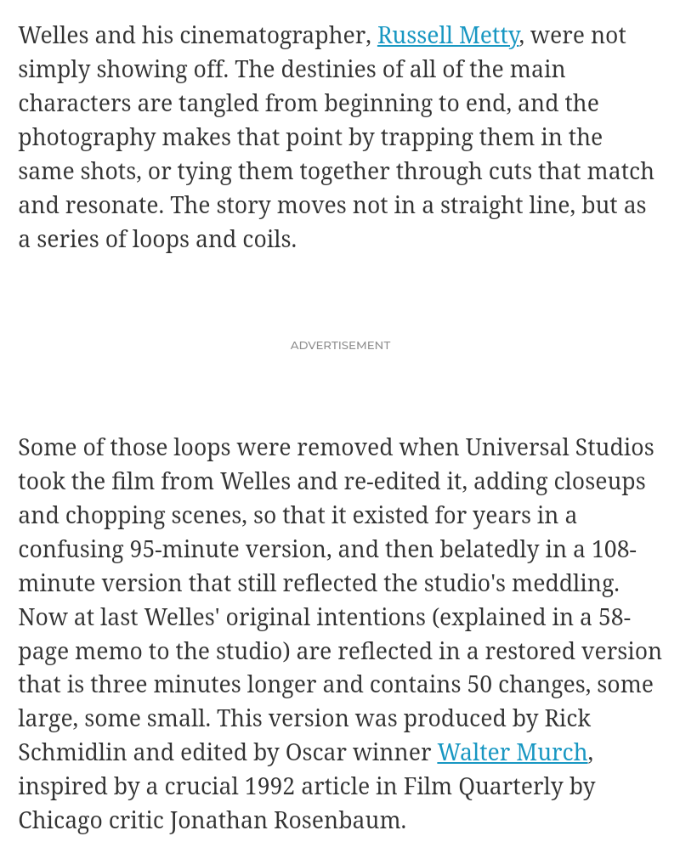 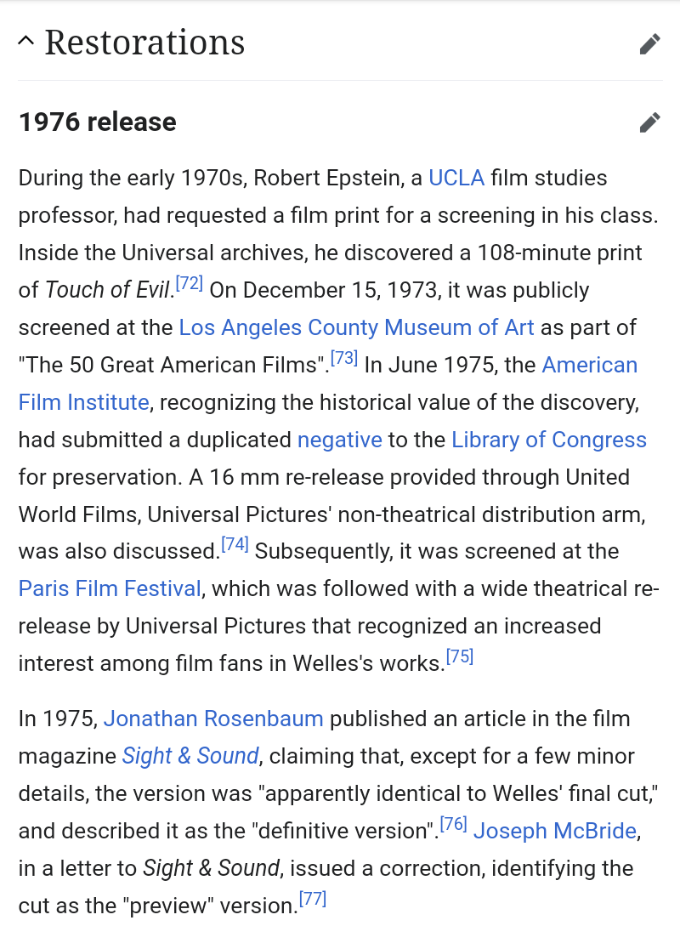 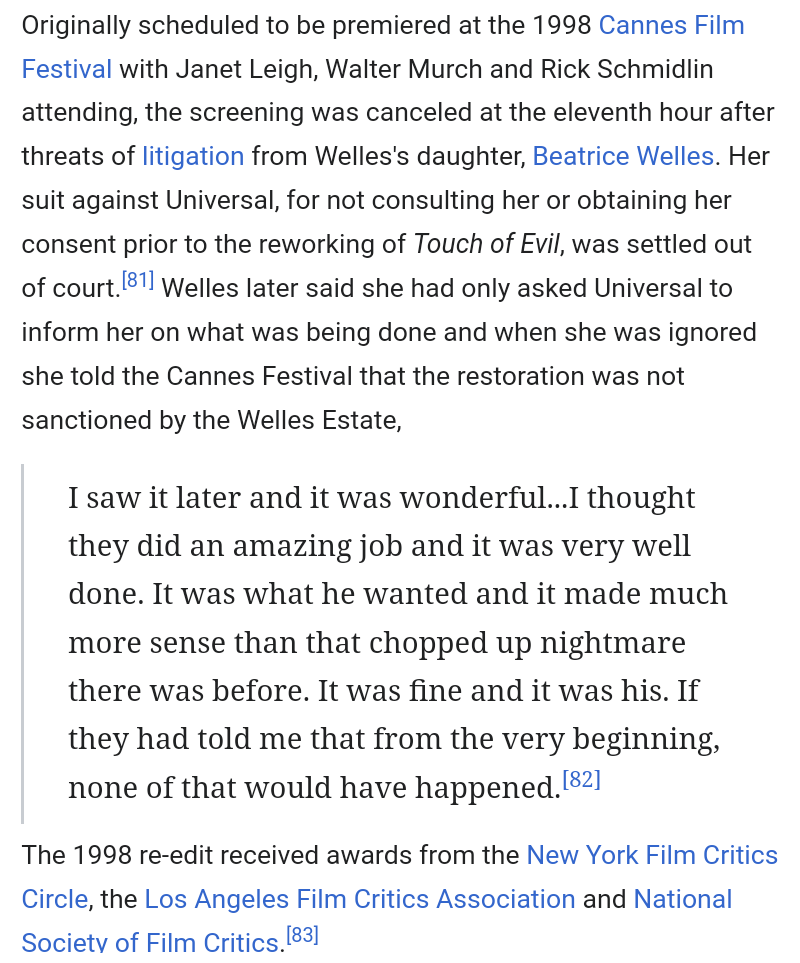 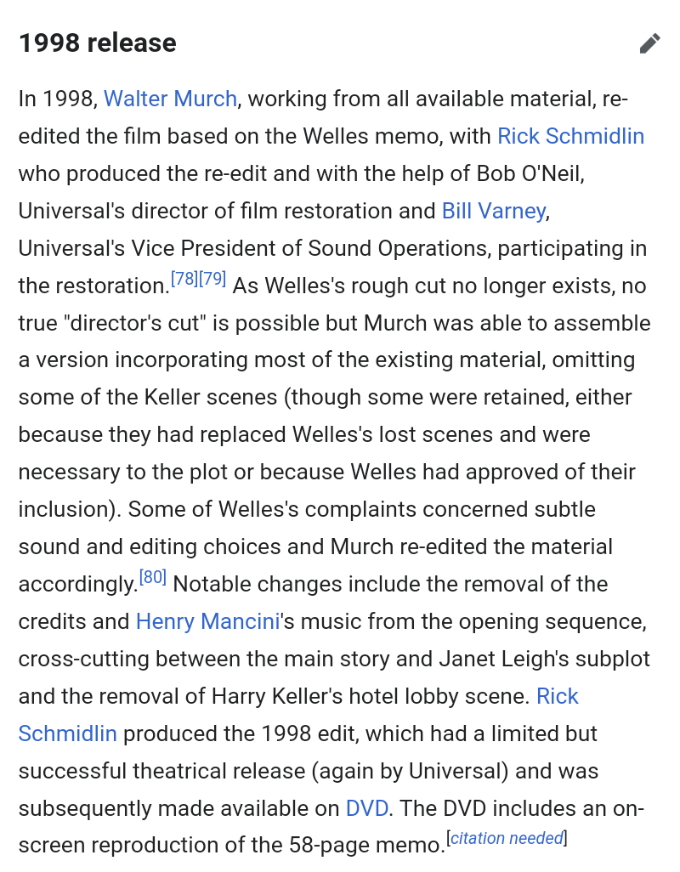 I think a more detailed view on things is always better, but in borders. There must be a competent crew who decides if another cut is really worth for an extra page. I see also technical problems. When you search for a title, which one would be picked? If there are fife cuts for one movie, then how to separate them? (Especially without confusing people, which are not such movie nerds like us.)

Some people go to cinema once or twice a year, because many people are not so into that hobby. Some of them might be deterred if there are too many options they can't understand. For many people one movie is simply one movie. It takes sensual methods to not overwhelm them. I don't know if the database would think about these things, but I would welcome them as well as separated movie and premiere image galeries. One thing which annoys me more is the mixing of premiere photos and movie images.