There are many ways to finish someone. Physically, emotional or existential. This time the 'Finishing Move' is used literally or as an idiomatic expression for a situation, a sequence, or a process. This poll contains spoilers.


I've put in spoilers to the list, because these scenes are very often part of story-telling of these  movies. - so anyone can peek or not. 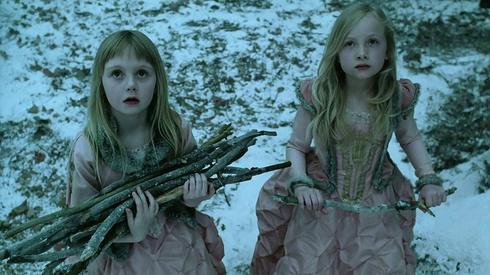 What's that? I don't know that movie.

Was that Sleepy Hollow? I don't remember properly.I guess 'Sleepy Hollow' could be a  good suggestion for the poll.Can you tell me the finishing move for remembering?

I suppose I could, but the fact that the source of the still was not immediately recognizable makes me feel reluctant. Nobody will vote for it anyway if nobody knows what it is, right? I don't know. For certain, the victim of the "finishing move" is not even shown in the particular screenshot. Haha.

I slightly remember. It must have been 15 years since I saw that movie last time. I've put it on the list. Sorry for been slow on the uptake. I've taken another picture that makes the memory more living. The two girls alone did not work to remember on this movie, but with the hessian Horseman and the girls is feeding more memories - if one has seen the movie. Wasn't it, that they were his daughters? Gotta watch it again.

I wonder why you used an image from Cloudfront. The same image is in the IMDb database. :)

The movie was correctly identified by albstein. It's worth being watched or re-watched. Though it is possible, the two girls are not known to be the Hessian mercenary's daughters. Their story is a bit involved. In the scene from which the frame is taken, they were out gathering firewood because their widowed mother was too ill to do it herself. By inference, the way of things in story is that the meek girl on left would do the heavy lifting while the mean bitch on right had other ideas. Anyway, that day, the Hessian mercenary happened to wander into the girls' collection area, when he had been ambushed, nearly assassinated and subsequently pursued by a squad of United States soldiers/militiamen earlier. Stealth would have been imperative to the Hessian's successful evasion of the troops, but things did not go so well. I bet you remember why.

Yes, I guess, I gotta watch that movie again,
even if  fantasy fiction usually is not really my cup of tea.
Thank you. :D

Breumaster, you wrote, "I wonder why you used an image from Cloudfront. The same image is in the IMDb database." The image is not exactly "from" Cloudfront, as you probably already understand. I uploaded it "to" this forum instead of using an HTML "img" tag with a source attribute non-native to the forum's system/configuration, for a few reasons: (1) the ease; (2) the forum's "inline" thumbnail feature; (3) the reduced likelihood of the image file becoming "not found" (HTTP error 404).

It's a cool idea but you should have made it a "title" poll, I know the images look good, but the poll is less spoiler-y with the movie posters, otherwise, you have to focus closely on the picture, the risk is that by the time you realize it's a film you never see, you might have read the spoiler already. Sometimes, the simpler, the better.

That can't work. The text stays the same and will spoil anyway. If I take the titles, many users will not remember the situations of the finishing moves. A few times 2 images are from the same movie. This is made more for users that have seen many movies. I guess, I will cut that into two poll suggestions. But putting a black bar on the spoiler-line is good for individual avoiding of spoiling. Everybody knows him- or herself what he or she has seen.

FYC:
Over the Top - I think the whole thing is that if he's losing he can go "over the top" and win.

'Over the Top' with Stallone? Can you please tell me finishing move there? It's long time ago I saw this movie. I know it was something about arm-wrestling. Or do I get you wrong? Sorry. I don't really understand your FYC. Maybe you can tell me more detailed.

I knew that the poll will be a hard one to vote as soon as I've seen that it has two of my all-time 25 favorite movies on it. :)

Hi Breu, I left you an important note in our discussion thread on the re-push requests thread. Read it when you have a minute so I can re-push the second poll for which you requested a re-push. Thank you. :)

I guess many people will pick it. :)

it's iconic, so yeah probably

Tarantino movies got a lot of scenes like this . :/

The finish combo of JakeTyler in "Never Back Down"


Django sarcastically saying "I like the way you die boy" to Big John Brittle in"Django Unchained". Sarcastic because there's one time Big John said to him "I like the way you beg boy" in a situation when him and his brothers are whipping broomhilda and Django pleads for mercy. It was like a Reversal of "who's got the power now? "

If you don't want to include this one as there are many choices, you may consider including in a second part. That is if you are interested in doing a part II.

I say the Jurassic World.  That thing was so creepy!