Live Poll: What Day Is It?

when i first read your question, my mind went to 'if it's tuesday this must be belgium'...but seeing your list and understanding it better, i would have to go with 'the day of the jackal'...

"I would change The Day the Earth Stood Still to the 1951 version". It was already that before the advice was given. Odd.

Great suggestions, Jen. Thanks a lot! I included most of them, except:- Bastille Day --> This movie is known in the US as "The Take"- Day of the Woman --> Better known under the title "I spit on your Grave"- Holiday --> Refers more to a period than to a specific day

I'd go with Terminator 2 (1991) though I'm not sure the film still qualifies in your list as the "judgment day" part of the title has now been dropped on IMDb.

Hi, Kyle Perez. The "Judgment Day" part of of the title hasn't exactly been dropped. It just doesn't show up in every  logged-in user's preferred/default site presentation.

Which is quite sad, considering someone might confuse it with Terminator II (1989).

Nikolay Yeriomin, gosh, where do you find these obscure movies? Shocking dark - Spectres à Venise looks interesting: I want to see it.

Oh, I've seen a lot of weird stuff. :) That movie is much more enjoyable and watchable then you would expect from Italian pseudo-sequel (which oddly enough was a whole genre of exploitation), but it has more in common with Alien franchise then The Terminator, although some scenes are replicated from the original for it to pass as a sequel. 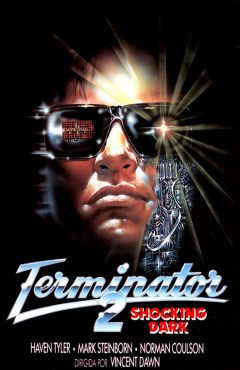 Thanks for the input. Done.

Unfortunately The Day the Earth Stood Still got listed twice.

O, okay. I hadn't even noticed.

Pencho, thanks for noticing that.
Unfortunately, both options have received votes and cannot be removed.

Any suggestions what to do?

I guess there are two things you could do.

Either change the text in entry #16, to indicate that the option is only for the 2008 remake.

Or, change the title itself to the 2008 version, as long as you put it back in the same place in the list.

Here is the problem with both of those options:

It's possible that they didn't look through the rest of the list to notice option #25.

Since we don't know for sure, it would be like potentially removing the votes for the three people that voted for option #16, if they intended to vote for the 1951 version, and simply didn't notice option #25.

I'm not sure what would be the best thing to do.

the original was far better than the remake...if anything, leave the original...

Thanks for the suggestions. I changed option #16 to the 2008 remake and left the original in option #25. I think this is also how people currently read the poll.