Variety announced that Warner Brothers is planning an Oscar contender campaign for Wonder Woman (2017) and Patty Jenkins. Warner Brothers executives are aiming for Best Picture and Best Director.  Do you think Wonder Woman (2017) and/or Patty Jenkins should be Oscar contenders for Best Picture and Best Director?

I didn't want this to be a Face-Off that is why I have 5 options.

If I remove option 4, leaving me with four options, do I have to make it a face-off?

A four-choice poll can either be a face-off poll or a regular poll at the discretion of the author.

I wasn't sure glad I finally asked.   Thank you!

Contenders, sure. And it's fair enough to campaign for it.

I can't really say whether they should be nominated yet.

Without having watched many films yet, I don't think Wonder Woman deserves nominations in any major category. I found it overrated and gave it a ranking below the minimum score I think Oscar nominnes should have (an 8 on my list)

Its public now.  Thank you for letting me know.

I didn't see the film, but what is so special about it so that it deserves these nominations, I mean more than all the superhero movies made since the 2000's? Is it that revolutionary or do they just want to set a precedent?

For Your Consideration page
http://www.warnerbros2017.com/screenings/for-your-consideration/?film=wonderwoman

I'm happy to see Warner Bros. support 'Wonder Woman' by launching a "For Your Consideration" page and campaign.

One of the ads: 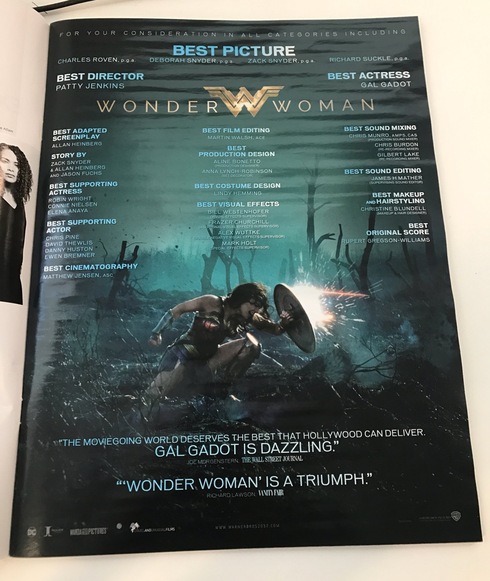 Perhaps you could update the text so the poll could still be considered.

Wonder Woman was fine, definitely a more coherent movie than the previous two DC superhero films (BvS and Suicide Squad). But putting the fan-hype aside, I don't think it deserves any kind of Oscar nomination. I also understand that a female superhero is a big deal for certain people, but Oscars are supposed to be about the art and the quality of filmmaking, not "social justice".

Greta Gerwig for Lady Bird and Dee Rees for Mudbound have far better chances to be the Oscar-nominated female directors and there are still strong contenders like Kathryn Bigelow and Sofia Coppola. For all I know, maybe Wonder Woman is Best Picture material but I'm not sure the directing campaign will lead somewhere even with the "female director directing a female driven superhero movie'" angle.

" but Oscars are supposed to be about the art and the quality of filmmaking, not "social justice".
Tell that to the academy who nominated some real pieces of trash not because they were well made but because of the social message in the film.

"Tell that to the academy"

I don't think they care about my opinion.

I updated the list but not sure what you meant.   "Perhaps you could update the text so the poll could still be considered."

I think the intro still said "planning a campaign" or something like that, that's all. Looks good now.

Did you delete your list or is it private?

I updated it, Peter said something about text?


Should Wonder Woman be nominated for an Academy Award for Best Picture and/or Best Director?

In Decreasing Order of Votes
http://mypollwatch.blogspot.com/2015/03/imdb-polls-descending-order-of-votes-by.html#phoenixr3