Among the many rituals that punctuate our lives, partying is certainly the most pleasurable one. The anticipation lasts longer than the actual enjoyment but the memory lasts forever... in fact, even bad parties make for greater memories on the long term.

Celebrating the beginning of the new year... and the new decade, here's a poll dedicated to movies where one or many parties occupy a significant portion of the story or where the notions of partying and having fun play an overarching role plot-wise.

Which of these party-themed movies would you take inspiration from (costumes, music etc.) for a New Year's... and New Decade's celebration?

The Fearless Vampire Killers! - no doubt. Happy New Year to you too

Can't believe it's gonna be 2020...Haven't seen many of these movies, and I'm not quite sure I understand what we're voting on anyway.  :/

Also, the "Jellicle Ball" is the central setting of CATS, and that would be one hell of a New Year's party theme.

Cooool, I needed a 35th entry... probably putting it in the Top 5.
I added other films... if some are misplaced please anyone let me know

i am not sure if this fits the slant or tone of your suggestion, but i would find room for The Celebration (1998) aka Festen (original title) . IMHO, Festen is one of the greatest party movies ever made both for its critical acclaim and for its memorable take on the subgenre. I have a live poll  Movie and TV Office Parties Gone Bad that could be mined for the movies that are one big party from beginning to end. Let's Celebrate New Year!!! also could have a few choice options that would be event specific.

Festen is good, thanks!

P.S. I would cut some of the options where the party is a single scene or maybe just a part of the movie, like Dead Alive (1992) and a half dozen others. i would focus on movies that are a party from begining to end or that follow the Superbad formula, where if the characters are not at a party, the story is about getting to the party or dealing with the repercussions. Very Bad Things (1998), its gender flip rip-off Rough Night  and Go (1999), all come to mind as better choices.

"Dead Alive" is the one I saw that follows that formula and I remember the party occupying more than one third of the story (the most entertaining part) and one of the most memorable quotes is still "This party is over!"

But you know, I kinda agree with you, and I would love to know which other movies have a party a single sequence (the climax in general)... there's "Carrie"... what else?

I think my point is rather that there are unlisted movies that seem to be more about the party / partying (see hyperlinks) than some of the listed ones. About ten of your listed options had a memorable party scene, but seem to be dominated by other aspects that IMHO don't make them an outstanding party film. I think there enough party films out there, that there are enough for it qualify as a genre. ie https://www.ranker.com/crowdranked-list/best-party-movies and even has a sub-genre of Beach Party Films (which lacks a single representative on your list). In one humble movie-goer's opinion, I like Office Christmas Party, Die Hard,The Wolf of Wall Street, Rough Night, Very Bad Things, The Hangover, Sisters, Neighbors, Old School, Neighbors 2: Sorority Rising, This Is the End and others over The Fearless Vampire Killer (1967), Dead Alive (1992), Sixteen Candles (1984), The Rules of Attraction (2002), 10 Things I Hate About You (1999), Adventureland (2009), The Best Little Whorehouse in Texas (1982) and Carrie (1976). I haven't seen Fellini's Casanova (1976), but La Dolce Vita (1960) (basically about a week of parties and partying) seems to be a better Federico Fellini party choice. It is higher rated, more voted, more well-known, has more accolades and seems more on-topic. I just saw Dead Alive original title: Braindead (1992) for the first time this past year. I agree the party scene is conceivably the last third of movie and reasonably could be included in this list. The Peter Jackson cult film just doesn't strike me as a party-themed movie, as the actual party is crashed pretty quickly and the zombie attack dominates the final act. As zombie party scenes go, I enjoyed the zombie attack @ the Ball scene in Pride and Prejudice and Zombies (2016) better. I personally don't consider either title a party-themed movie.As constructed, I don't think this list should be pushing the thirty-five choice limit. I would swap some of the middling choices for some more undeniable party films and/or leave them off altogether for future or yet undiscovered party / partying films. PS: I would suggest a party/parties/partying idiom to spice up your poll title, like a shorter version of Party-Themed Movies That Make You Want to Party All-Night Long.

Lol, I'll do my best... it's a bit too late to consider changing all the wording, I'll fix the typo and reconsider a few suggestions, based on your suggestion.
PS; Die Hard isn't really a party movie since the party is "pooped" in the first twenty minutes, the party is just a set-up... like in "Poseidon Adventure"

Back to the Beach will be the "beach" official representative

The wording of question or introduction doesn't need to be fixed. I am just expressing a personal opinion on the pool of answer options, I would think of them for your consideration options coupled with candidates they could replace since you are at the limit.

I wonder which part of Festen you guys are planning to recreate for your New Year's party.

Among the many rituals that punctuate our lives, partying is certainly the most pleasurable one.

Oh geez, when I posted this, I was thinking "favorite of the films." Yeah, I wouldn't want to copy much from 'Boogie Nights,' lol.

Bonne Année!!!
(isn't it bad luck to wish it before it happens?) 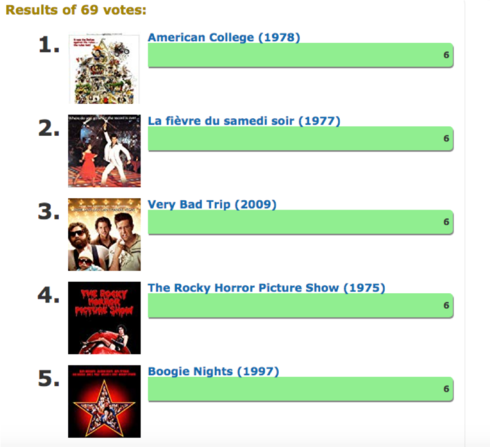 Um? Awkward question. Did you see The Celebration (1998) before putting it on the list? Despite the name? It's not a very celebratory film given the nature of what was revealed during the run of the film.