Live Poll: Iconic Shots in Which Actors Were Doubled

By nature, filmmakers would try to film the movie in such a way that you won't suspect doubles were used, if they were. Sometimes the shots (or whole scenes) get so iconic that it is surprising to discover that it's not the known iconic actors in them, but some cleverly disguised acting or stunt doubles.

Out of collection of such shots, which one is your favorite?

FYCAnjelica Huston as Agent Mimi's Hands (uncredited) for Deborah Kerr as Agent Mimi (Alias Lady Fiona) in Casino Royale (1967) https://en.wikipedia.org/wiki/Casino_Royale_(1967_film)#Uncredited_cast The film also proved to be young Anjelica Huston's first experience in the film industry as she was called upon by her father, John Huston, to cover the screen shots of Deborah Kerr's hands Margherita Pace credited for nude body double Jennifer Connelly as Young Deborah in Once Upon a Time in America (1984) Ballerina scene https://www.imdb.com/title/tt0087843/mediaviewer/rm213589017617 Actors Who Opted To Use Body Doubles For Famous Scenes

Great thanks! I'm surprised I forgot about Anjelica Huston in that movie, but considering that nature of it, I'm not entirely surprised: there's just too much going on! Will try and find the image of her hands.

As for body doubles for nude scenes: I'm doubting that a bit, as fewer of this shots actually possess any relevance for the movie, hence "Iconic" part. Most of the shots I've collected are so well known they were featured heavily in promotional materials, posters etc...

I think some of the more torrid sex scenes of the movies might fit the bill as "iconic" especially those which were much discussed by moviegoers. I listed the Margherita Pace credited for nude body double Jennifer Connelly as Young Deborah in Once Upon a Time in America (1984) Top Rated Movies #70 Ballerina scene because I find it to be iconic for two reasons. it is an important component of the Noodle flashback to his youth scene that opens the movie: https://www.imdb.com/title/tt0087843/mediaviewer/rm337060352 (when he peeked through a whole in the wall to watch her practicing in a backroom and she knowing teased him). It became even more iconic in latter years because it was the first movie for a young Jennifer Connelly, who went onto stardom and only appears briefly at the beginning of the movie. She has less than few minutes of screen time in a nearly four hour movie, yet has over 10% of the images in the movie's IMDB gallery. 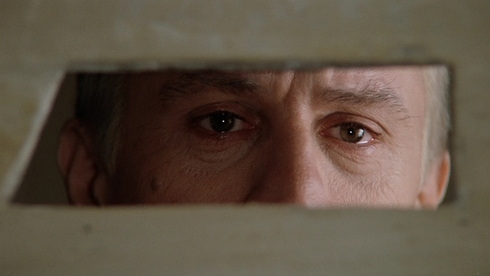 urbanemovies, Thanks for explanation. Will add Connelly soon.

urbanemovies, I'm still hoping to add Connelly, but struggling to find photographs of Margherita Pace doubling. I'm sure it is possible, though.


In Inglourious Basterds, the scene when Hans is suffocating Bridget, actually it was Tarantino who did that.

Great thanks for this one, SeventhAr7! I was totally aware of that fact and yet, some of the best one start to elude as soon as you're opening the list and start to compile it! :)

Interesting pollI don't have any suggestion (not for iconic shots anyway). Maybe it was a double who rode the bicycle in E.T. in the moon scene? It would be worth to check.

I remember reading about The Third Man shot --- very interesting that Reed opted to use his own hands in that iconic shot.

I don't think that he opted: rather was left with no choice but to use someone as a double. Welles very nearly derailed the production by first showing up late and then not agreeing to film in the sewers fearing to contract something (the latter leading directly into the fact that he's doubled in that shot). Arguably that actually made the movie better as the use of doubles and trick cinematography to mask his absence in many shots made them much more inventive on top of already distinctive style chosen by Reed.

It's hard to say whether Reed actually given that a good thought or this shot was a last-minute decision so he used his hands just because he needed somebody and crew was tight. With director cameos it is quite often a bit of both. :)

That and... I think we can very much agree that the shot would have been iconic regardless of whose fingers were there, although acting-wise Reed still did and admirable job with his shot.

FYC:This one distracts me every time I watch the movie. In the famous truck-motorbike pursuit in Terminator 2: Judgement Day you can clearly tell that in the wider shots it's not Arnold riding but stunt double, Norman Howell.

Interesting, I always thought it was Peter Kent, who did most of the riding (his face is quite similar to Arnold, but still there are differences and you can tell where it's him most of the time). Regardless, great thanks for reminding me of that shot: everyone in it is a stunt double and it only works because it is well-edited with other shots. It is of note that recent re-releases including last year's theatrical one actually tried to correct that, compositing faces over doubles. I have nothing against that, but it kind of takes away the beautiful imperfections about the shot.

The first two Terminator movies are full of that and it is always exciting for me to watch shot-for-shot how they got away with that (usually it is a combination of good editing and overall framing of the shot). In The Terminator (1984) there are at least two instances of Kyle Reese being doubled in both of which it is rather glaring on freeze frames that it's not Michael Biehn. Including one instance where double's face is actually a close-up!

I've accounted how much screen time the titular Terminator has in the movie and it s rather amazing: 26 minutes of which Schwarzenegger is there for like 16!

James The Movie Guy, I was going to find a good image out of existing ones for that scene and found this which is arguably an even more iconic shot and is that of Peter Kent. It will probably be too much to feature a few shots from the same movie, so I would like your opinion on that.

'Good idea. My favorite shots, of these, would be the one from 'Third Man' or maybe 'Psycho.' 'interesting and informative poll; I like it a lot.

Well, it's an iconic shot... sort of. The leg in "The Graduate" poster was Linda Gray's ;)

I actually thought about The Graduate (1967), but such poster models require their own poll which I'm planning to do, as well.

The Evil Dead (1981) is also quite an offender with most of the posters featuring Bridget Hoffman who is nowhere to be seen in the movie itself.

Correcting that right now, great thanks for pointing out!