Which of these heaven sent threesomes is your favorite Charlie's Angels franchise trio over the years?

corrected, Favorite Charlie's Angels Trio
The Kristen Stewart, Naomi Scott, and Ella Balinska crime-fighting trio will reboot the adventures of the iconic private detectives in Charlie's Angels (2019) out in theaters 01 November 2019 (USA).To be clear, this poll suggestion is intended for publication in November of this year.

something tells me this new movie is gonna suck...

Banks is not an angel, She is the director of the movie.Elizabeth Banks directorKristen Stewart, Naomi Scott, and Ella Balinska angels 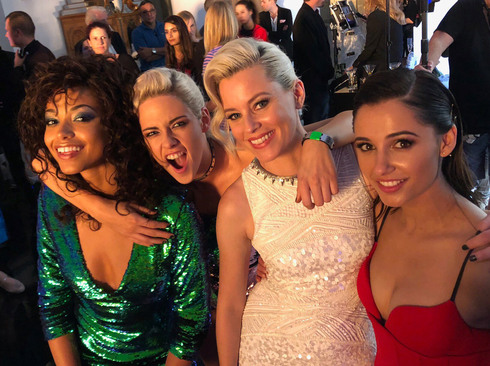 Got my vote, bring it online! ;D

More an indication of too much time on their hands between takes,
Plus, celebrities love the Charlies Angels Finger Gun Pose

They are going to be tough to beat, did Farah really add that much a mystique to the first incarnation???

As I recall, Farrah wasn't on there long at all before she was replaced.  Weird, because forever I assumed she was just on there all along!

Normally, i would say the situation of her leaving a hit TV show after twenty-two episodes surprising.  Especially, after only a few minor movie roles and basically a few guest star appearance on TV series over the years. But, It seems like her exit was driven by the popularity of her poster.How Farrah Fawcett Changed the World – Texas MonthlyRise to stardom from https://en.wikipedia.org/wiki/Farrah_FawcettIn 1976, Pro Arts Inc. pitched the idea of a poster of Fawcett to her agent. A photo shoot was then arranged with photographer Bruce McBroom, who was hired by the poster company. According to friend Nels Van Patten, Fawcett styled her own hair and did her makeup without the aid of a mirror. Her blonde highlights were further heightened by a squeeze of lemon juice. Fawcett selected her six favorite pictures from 40 rolls of film, and the choice was eventually narrowed to the one that made her famous.The resulting image of Fawcett in a one-piece red bathing suit is the best-selling poster in history.

Cast changes from https://en.wikipedia.org/wiki/Charlie%27s_Angels  Over the course of its five-year run, Charlie's Angels had a series of highly-publicized cast changes. The first of these took place in the spring of 1977, just after the conclusion of the first season. Fawcett turned in her resignation just before the season one finale aired on May 4, 1977. Fawcett's decision not to return for a second season triggered a lawsuit against the actress by ABC and Spelling.

During the 1977 summer hiatus of the series, ABC and Fawcett entered a legal battle over her contract. At the beginning of the series, all three female leads signed five-year contracts, and the network was insistent that they live up to their commitments. Business partners Leonard Goldberg and Aaron Spelling tried to work out a deal with Fawcett and her agents. Goldberg and Spelling had arranged for her to make one film during her summer hiatuses, and her choice over subsequent television shows and miniseries. ABC even agreed to raise her salary from $5,000 to $8,000 a week, but she declined the offers. ABC reluctantly released her from her series contract in the summer of 1977. However, she was assigned to another contract with ABC, stating that since she left her contract four years early that she would return to the series later on in its run for six guest appearances. Fawcett would return as Jill Munroe on Charlie's Angels for three guest appearances in season three, and again returned for three guest spots in season four.

She's perfectly lovely in that picture... but is just me or is her smile too big and weird?  :DFawcett styled her own hair and did her makeup without the aid of a mirror.
﻿Wow.  Just wow.

It seems like every female 20-40 years old for the ten years was copying her hairstyle. So,to say her style was influential would be an understatement.

Saw the trailer for the new one... yuck.  Typical looking movie and I never enjoy Stewart on screen.

I am not a huge fan of her either, although I respect her commitment to mixing in indies with her regular workload. I would say I  am surprised, but I am not at how much Hollywood can milk the nostalgia of a classic TV series. But, I think it is more about having an action vehicle that will get green lit and support a primarily all female cast.