It would more practical if this was a title poll.

BTW, it is an interesting poll. I know absolutely nothing of Egyptian cinema, except for Youssef Chahine and Omar Sharif.

Indeed this would be better as a title poll if you can change it. If you need help doing it we can try to help.

I agree that it would work better as a title poll. It's an easy thing to do so we can certainly help you if you'd like – just let us know. : )

It's the first time for me to deal with IMDB community, So I actually don't know how to create a poll. Many thanks for you.
@cinephile @Pencho15 @rubyfruit76

It's all to your credit to shed light on Arab cinema and its most prestigious ambassador: Egypt but I'm afraid this poll asks too much for voters who're not familiar with Egyptian classics, let alone TV series aired during this Ramadan (lol not even classic TV series from previous years).

I'm pretty sure a poll about Egyptian cinema or stars would be a better start... but if you want to stick to your idea, you''ll have to tell us a little more about these series and ask us which one interests us the most.

Don't worry Mody, you're actually doing a great job for a new user.

The proposed change is only a suggestion because images sometimes dissapear from the IMDb, and that could cause your poll to miss some options in the future.

If you make a title list, then there is no risk of this ever happening and your poll will appear in each title making it easier for people to find it.

To make this change, you need to create a new list, but instead of image, select title type: 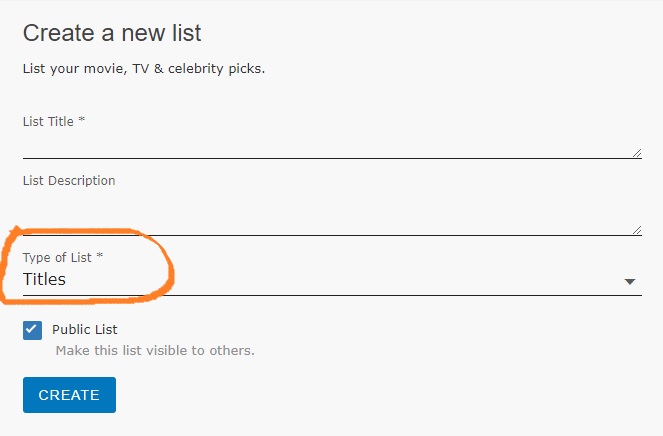 Then, you can add all your titles simply by writing its name in the search box: 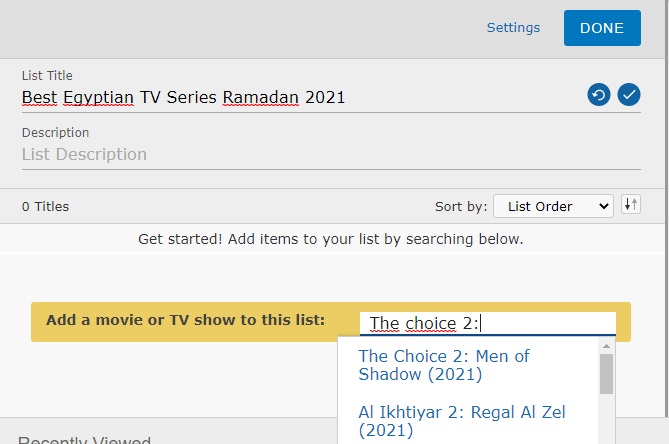 Click on the title once you find it and it will be included in the list. They will be shown as posters if this is published as a poll: 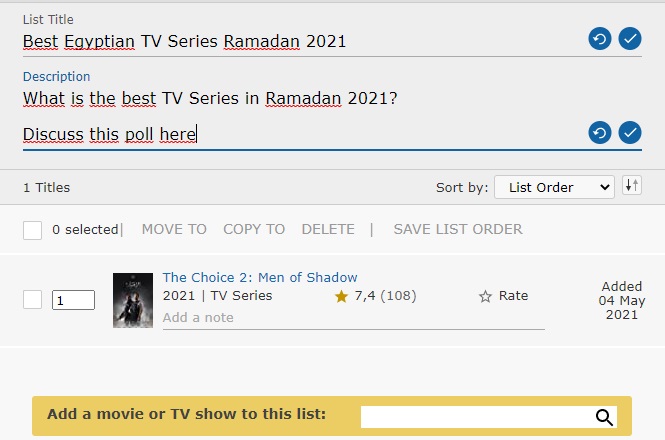 Once you're ready, just post the link to the new list and we'll take a look again.

While polls from Egyptian tv series may not have as much votes as others from titles known worldwide, the chance to show the film culture of different countries is always welcomed. We have had polls on Syrian television before.

I second the comment about the poll looking pretty legit from a newcomer.

The original idea was good but to warrant a better chance to garner more votes, I only suggested that you could copy-paste the synopsis so the users can get an idea of the shows featured in your poll.

I often thought of making Ramadan-related polls (about food or hunger for instance) so take my advice as genuine encouragement :)

Thank you @ElMaruecan82, for your comments I appreciate your advice and I'll take it in my consideration in the next steps.
Also thank you @Pencho15 for your comments and your effort. I created a new title list and posted the new link in the description as you said.

Congratulations, ModyMaher on your first poll!

Please note: I did not see your last post and created (pushed) your poll based on your image list.