Which American football player* would you draft first from a TV series or TV movie? *players should be evaluated on the basis of both their contributions on-the-field as well as on-screen

my heart would say harpo in 'horsefeathers', but my head would be nick nolte 'north dallas forty'...

Revised Poll Header:
Which American football player* would you draft first from a TV series or TV movie? *players should be evaluated on the basis of both their contributions on-the-field as well as on-scree

Confused. Are QBs welcome on this poll or not?

And a little bit of fun...
https://www.youtube.com/watch?v=gODZzSOelss

Do you know what position Noah 'Puck' Puckerman played by Mark Salling in Glee plays on the football team?

Yes, quarterbacks are included in this poll suggestion, but the position is over-represented in the poll and in movies and on TV. It is just one of twenty-six positions on a football team, yet seems to comprise at least a third of all characters. In total, quarterbacks along with other skills positions (RB or WR) seem to comprise 90% of characters with an occasional K or MLB thrown in for color or comedic relief. I am striving to have a mix or at least the illusion of some balance to the poll roster.

Thanks, these are some good suggestions. However, for now I am going to try to limit the characters to more football-centric TV shows and TV movies. They offer more on-field footage and behind-the scenes football discussions. I originally had about three or four of your suggestions on the list, but cut them to take an all or nothing approach. I found by adding a few them, it widened the scope too much and offered very little football in return. It also made it difficult to choose between the pluthera of characters that football is a part of their backstory. Plus, it made the omission of similarly qualified, but equally limited TV series characters more glaring.

Glee, for example probably has more football integrated into its story line than most shows. It had more than a half-dozen characters on the football team, including at least three main ones. But, like most shows football is limited to a window dressing aspect, a character backstory, something to be discussed in passing or at most a couple episodes story arc. This qualification eliminates hundreds of popular TV characters, but makes the poll more about football or easier to judge their contributions on-the-field as well as on-screen.

Brian Piccolo (Born: October 31, 1943, Pittsfield, MA
Died: June 16, 1970, New York City, NY) is not a fictional football player. He did player for the Chicago Bears. "Brian's Song" is a true story. Therefore, he has to be removed from your list.
This the picture of the real man and his football playing card.

So was this man a real football player and not a fictional one. Gale Sayers 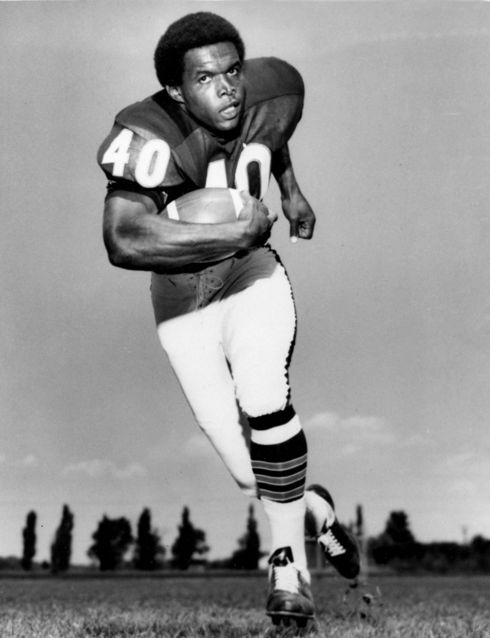 i just looked over the list again and now it seems to be all tv footballers except for brian piccolo and gale sayers, who were both very real players and not fictional...

I revised the scope and question to be limited to TV series or TV movie, plus players can be fictional or real-life in the TV version of this poll suggestion. This was done to specifically allow for the iconic TV movie Brian's Song, which is probably the greatest TV tribute to football ever.

Revised Poll Header:
Which American football player* would you draft first from a TV series or TV movie? *players should be evaluated on the basis of both their contributions on-the-field as well as on-screen

Then I suggest you contact one of the admins to not only remove the word "Fictional" from the title on this page , but to also completely replace the title and description on this page to your new title and description.
As for those other two polls, please don't forget to mine the films I had mentioned for players - along with Harold Lloyd's Harold Diddlebock of "The Freshman" (really the orginnal film version of Adam Sandler's "The Waterboy").

In case you don't know what I was talking about, in 1947, Harold Lloyd and Preston Sturges made a movie called "The Sin of Harold Diddlebock" in which the footage of the football game in "The Freshman" was reused in the beginning of the film. This time the character was called Harold Diddlebock and he definately was the quarterback and receiver and running back.

Yes, the revisions were noted a couple of days ago, but have yet to be updated, They also are noted at the top of this thread and are now mentioned several times.

Speedy is already an answer option as a two-way player in the defensive poll suggestion, PS: Best American Football Movie Characters. He definitely fits the bill as a landmark character in one of most popular football-centric movie titles from the early days of film.  Player: Harold 'Speedy' Lamb, Position: Multiple Positions, Actor: Harold Lloyd in The Freshman

The other characters and movies were already listed on the appropriate football player suggestions.

I yes, know about Harold "Speedy" Lamb. I was trying to explain why I had used the name of Harold Diddlebock. The same footage was used again in "The Sin Of Harold Diddlebock". (Thus, you can use the same picture twice for offense and defense.)

Thanks, for the clarification. I think one listing is enough.It looks like Harold Diddlebock doesn't play any football anyways in the second film, but his earlier self, Harold Lamb does in flashback sequences.  Plus, he wouldn't qualify for offense as the question stipulation is for "purely offensive characters" with two way players and special teams, all listed on the defensive list to balance the division of characters.

Thanks Peter for updating the poll title and header.

You can mine these films for fictional football players.

The original "The Longest Yard" get at least of the defensive tackles from there: like Samson

Samson: I think I broke his fuckin' neck!

Announcer: I think he broke his fuckin' neck!

Team doctor: One side, one side.

Team doctor: Get the ambulance! I think he broke his fuckin' neck.

Samson: See! I told you I broke his fuckin' neck!

[They meet the Indian]

Paul Crewe: Well, first thing we have to do is get you out of here.

[Paul looks back at Caretaker]

"The Best Of Times"

"MASH" has people forgotten that three of the doctors in that movie where college football stars? Hawkeye Pierce, Trapper John, and Spearchucker Jones?

love your list dgranger, but i think the context now has shifted to tv only...

I did again after after I had posted. I still would have love to see it include movies too. He is right. TV mainly concrates on Quarterbacks and wide receivers. But since Jen here had mentioned Archie Andrews and Riverdale, what about Moose Mason?
And where is "Coach" - Dauber Dybinski. Before he became an assistant coach, he was a player on that team.

Thanks for the feedback.

Which American football player* would you draft first from a TV series or TV movie? *players should be evaluated on the basis of both their contributions on-the-field as well as on-screen

I think I included all the more prominent feature film football characters from your comments. Your suggestions helped validate their inclusion. I didn't specifically omit Dauber Dybinski from Coach. I will give him some consideration for the TV football version, as I want to include football-centric TV shows. But, ideally I am looking for characters whose identity is shaped by their current player status. Since players should be evaluated on the basis of both their contributions on-the-field, as well as, on-screen acting, the focus is on current players. I left off other main characters, Spencer Strasmore and  Charles Greane from "Ballers" as their former player status makes it hard to evaluate their on-field performance. Straddling characters with a former designation makes it even harder to evaluate them, since on the field football segments are already limited on TV.

The goal is to honor characters and titles that have a significant American football focus with an in-order emphasis on football game sequences, football practice sequences, football discussion sequences (meetings, locker room, etc.) and lastly other non-football sequences with a tie-in to football. As a movie character example, Samson shows how even minor stars in a limited role can earn a spot with a few impressive and memorable on-field scenes in an iconic football-centric title.

understand now urbane...sorry for the confusion...

and...with all these changes and everything, may i suggest burt reynolds as wood newton from the tv series 'evening shade'...he played a quarterback from the steelers turned high school coach...

Good suggestions, I am probably looking for characters with more on-screen football scenes and with football more ingrained in the story line rather than being part of a backstory. It is hard to see Burt competing in the TV poll version, and the support he would get, I suspect would come from his movie football characters.

Are you still working on this one? Your list says "not complete".

I expanded the scope to coaches, support staff and TV commercials, added and updated some pictures, as well as added the "colorful" spin on the question to even the playing field between series that use football more as a backdrop than an integral component. I think the poll has good balance between the two types of football characters, backed by who's who's of recognizable acting talent.

Which player, coach or support staff from a TV series, TV movie or TV commercial is the most colorful and enjoyable American football character to watch?

"The CW has ordered six more drama pilots, including those for the reboot of “Roswell” and a high school football drama that boasts Greg Berlanti among its executive producers."

"The high school football drama is titled “Spencer,” which is inspired by the life of pro football player Spencer Paysinger. It follows a rising high school football player from South Central L.A. who is recruited to play for Beverly Hills High. April Blair will write and executive produce, with Berlanti and Sarah Schechter also executive producing. Robbie Rogers will produce with Dane Morck consulting. Berlanti Productions will produce in association with Warner Bros. Television, where Berlanti is set up under an overall deal."