(Collaborative) Poll Suggestion: Movies You're the Only One to Know

We all have a movie we absolutely adore, I don't mean a guilty pleasure or a childhood favorite, a movie that we love because it meets all the requirements of a great movie and, as strange as it is,  sunk into oblivion and only a few of 'enlightened' ones know.

Whenever you mention the title, the answer you  get is "huh?" and describing the cast and the plot doesn't ring a bell either, you're lucky if you get a "mmm, sounds interesting".

Now, suppose you had the power to give the film a second release, to get publicity from IMDb, to be submitted to critics or film festivals, which movie "you're-the-only-one-to-know" would you pick?

The list isn't ready yet, I need suggestions. There's no criteria regarding the film except for one: it was never included in a poll, except if it's your poll and even then, it didn't get more than 1% of the votes. That's how unknown it is.

I would have suggested Fantasia (1940). However, I do not believe this meets the criteria of your poll since it is too well known and has appeared in multiple polls.

My first choice is Sister Kenny (1946). However, this may have already appeared in a poll.

My second choice is The Song of Bernadette (1943).

Visit to a Small Planet (1960) has not been used in a poll. It's my tentative choice.

this is perfect...i can't wait to read everybody's suggestions...

my suggestion, by the way, happens to be my favorite movie of all time called 'chinese coffee'...

it's a little known film that started as a two man play...it stars jerry orbach and al pacino and is filled with dialogue from open to close (no computer graphics or any special effects whatsoever)...

it's about a friendship that is awkward and dysfunctional at best, but is still so needed by both individuals...jerry plays a photographer and al is a writer who hasn't written much, except his one great masterpiece too many years ago...and now, tensions build as a new manuscript arrives...

i'll let you watch the rest for yourself...thanx again for your previous offer, and for this great poll as well...

ElMo, just a question: are we talking American movies or also foreign movies? If I take 10 random arthouse movies from my own country, I'm pretty sure that nobody will have ever heard of any of them. But maybe that's not the purpose of this poll. Finding an American gem that nobody knows might be much more interesting in this context.

just out of curiosity leavey...what country are you from...

Indeed, there are many countries in Europe with a smaller population than New York City! :-)

so true...but even in this country, if you are from new york, once you step across the border, everything else seems so foreign...

You're raising an interesting point, but the way I see it, it depends on your personal feeling. If you're not surprised that this small Belgian indie is not known on an international level, it won't be a big deal that people outside Belgium never heard about it. To give you an idea, it's just as if C'est Arrivé Près de Chez Vous wasn't such a celebrated cult-classic, I would've been pretty pissed-off.

ElMo, any tips on how we would find out if a particular film has been used in a poll previously?

In the film's main page, on the right side, you have the following sections (in order):
- Editors' Picks
- User Lists
- Connect with IMDb
- Share this Rating
- User Polls (unless it's never been used in a poll)

Could you do a screen grab? I don't have anything on the right of my screen(s) of any films. :(

Actually, i didn't find any in another page, but I had the user lists (Related lists from IMDb users) and user polls section. Forget about the others, do you get these two?

I'll try to do a screen grab but I can't find how to do a "zoom out" and get the whole page in the picture.

User polls only show up on the right side of a title's page in the main view for the title and only on IMDb's web pages. It will not show up in the IMDb apps (Android App, iOS App or Kindle App)

Here is the User Polls: 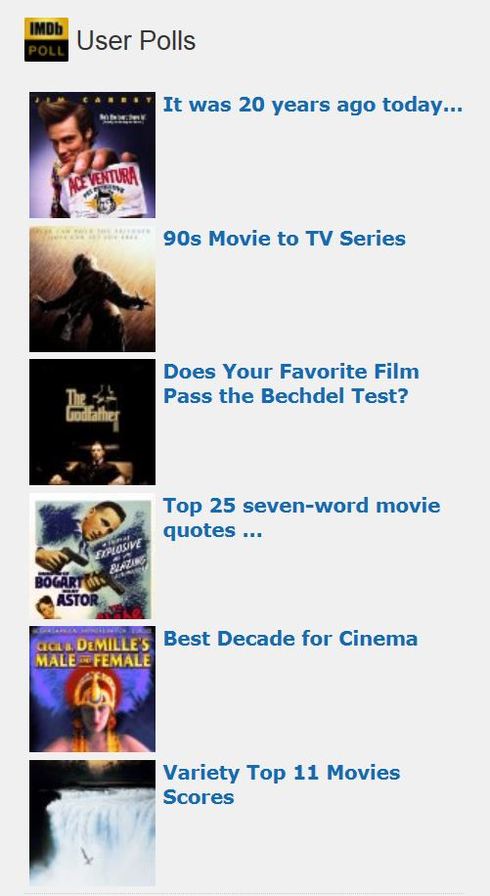 Turkish Tales (2003) is an example of a film that has not appeared in any IMDb polls. 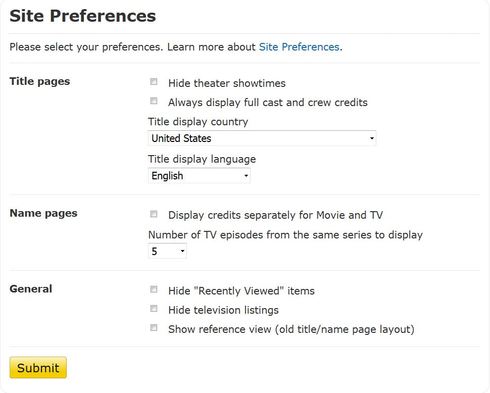 Thanks Dan. It was my settings. It will take me a while to get used to this (new to me) view!

Three years down the line? Does this still apply or are these page details gone completely by the wayside?

My tentative pick is Map of the Human Heart.

How about Marine Battleground? It has 68 votes on IMDb, and I don't see polls showing up.