Movies in the science fiction genre have long predicted the future with bold visions of robotics and artificial intelligence. Each movie sold us on the promise that the abilities of robots could far exceed those ofhumans and were almost limitless. When robots of different designs aregiven the same task the results will vary and probability tell us onerobotic outcome will exceed all others.

Retro Movie Character "Robot" Dance Battle
In your opinion, which of these select* twentieth century movie robots or robot groupings has the creativity, personality, capabilities and moves to win a "Robot" style street dance battle?

Modern Movie Character "Robot" Dance Battle
In your opinion, which of these select* twenty-first century movie robots or robot groupings has the creativity, personality, capabilities and moves to win a "Robot" style street dance battle?

*One consolidated robot answer option per movie or franchise to maximize robot choices, robots are classified modern or retro based on the date of their initial film appearance.

The robot was created in 1967; despite the dance's appearance in the 60's, the robot goes back to the 20's, when it was used theatrically in miming. It is a dance in which the dancer moves their limbs in a way that imitates the movements of a robot. Movements of the robot are normally started and finished with a dimestop (a very abrupt stop), to give the impression of motors starting and stopping, but poppers have also been known to do the robot with a pop to the beat. As long as the illusion of being a robot is maintained, it is considered the robot

Robot dancing is often considered a subsection of popping because poppers often include the robot in their routines, sometimes adding pops to the beat while maintaining the illusion of a robot, but the robot also exists as its own dance and is sometimes considered a performance rather than a dance when the performer is imitating a robot without any music. When done without music it is considered to be mime, instead of dance. Street theater often featured mimes who did a mechanical man or puppet style illusion, without music. In the late 1960s, the style was used while social dancing to funk or soul music. Charles "Robot" Washington was not the first to strictly imitate a robot as a mime, however he and his partner "Robot Ann" were the first to socially couple dance the style to music at parties and clubs, and it was at this point it became a party dance and later combined with other illusion styles to form today's popping style. It is commonly known as "Robotics". Roboting has also been likened to the jazz-era folk dance of puppeting (a style also appreciated in some colors of experimental ballet), whereby the dancer would emulate the mechanical movements of a simple musical box doll.

Stealth
EDI or any other robot/AI from the movie, 'Stealth'

Kronos
Kronos from the movie, 'Kronos'

MODERN
In a "Robot" style street battle, which of these select twenty-first century century movie robots or robot groupings would make the best* dance partner(s) for you? * perceived creativity, personality, capabilities and moves based on movie portrayal

RETRO
In a "Robot" style street battle, which of these select twentieth century movie robots or robot groupings would make the best* dance partner(s) for you? * perceived creativity, personality, capabilities and moves based on movie portrayal

"for you?"  modified to "for your dance crew?" in question 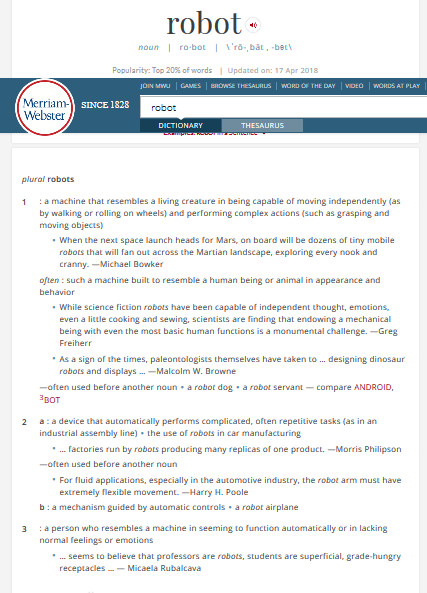 No one can beat this guy, though.

Nice, it takes me back. I would put my money on this guy in a head to head "robot" battle.

International Dance Day is celebrated each year on April 29th to bring broader public attention to the art of dance.

Any poll board suggestions for 2019 movie robots to add to the list?