I don't get why the images don't always reflect the options. Is there a specific reason?

You should specifically cite how they don't match. I reviewed both polls, every person cited as an answer option has a matching image of that same person to go with it.

Orson Welles got 3 Oscar Nominations for Citizen Kane in 1942, but you put an image of him in Touch of Evil. Why did you choose to do so?

I would have preferred to put a Citizen Kane image for Orson Welles too.

I opted for my second choice in this case due to a better solo head shot being available that was more centered and easier to view. It wasn't that long ago there were hardly any decent IMDb photos on the Citizen Kane page at all. This poll suggestion was created almost 4 years ago (10 Jan 2017) when the options on that page were very limited.

I prefer Citizen Kane over Touch of Evil, but you might be under-rating the latter a bit. Touch of Evil isn't exactly a bad film with its 99 Metacritic score and multiple Top 100 listings. It reputation has even got better over time when audiences got to see the version that Welles wanted to make, as the 1958 release was a product of the studio having final cut rights on the theatrical release. In 1998, Touch of Evil was re-edited accordingly to Welles's original vision, as outlined in the 58-page memo in which he elaborately outlined his creative vision for the film, in response to being kicked off the film.

Also, even though it is probably his second most famous role, I would agree that an early Orson Welles and an aging Orson Welles are barely recognizable as the same person.

P.S. I had to make similar calls on a couple other answer options.

I prefer Citizen Kane over Touch of Evil, but you might be under-rating the latter a bit. 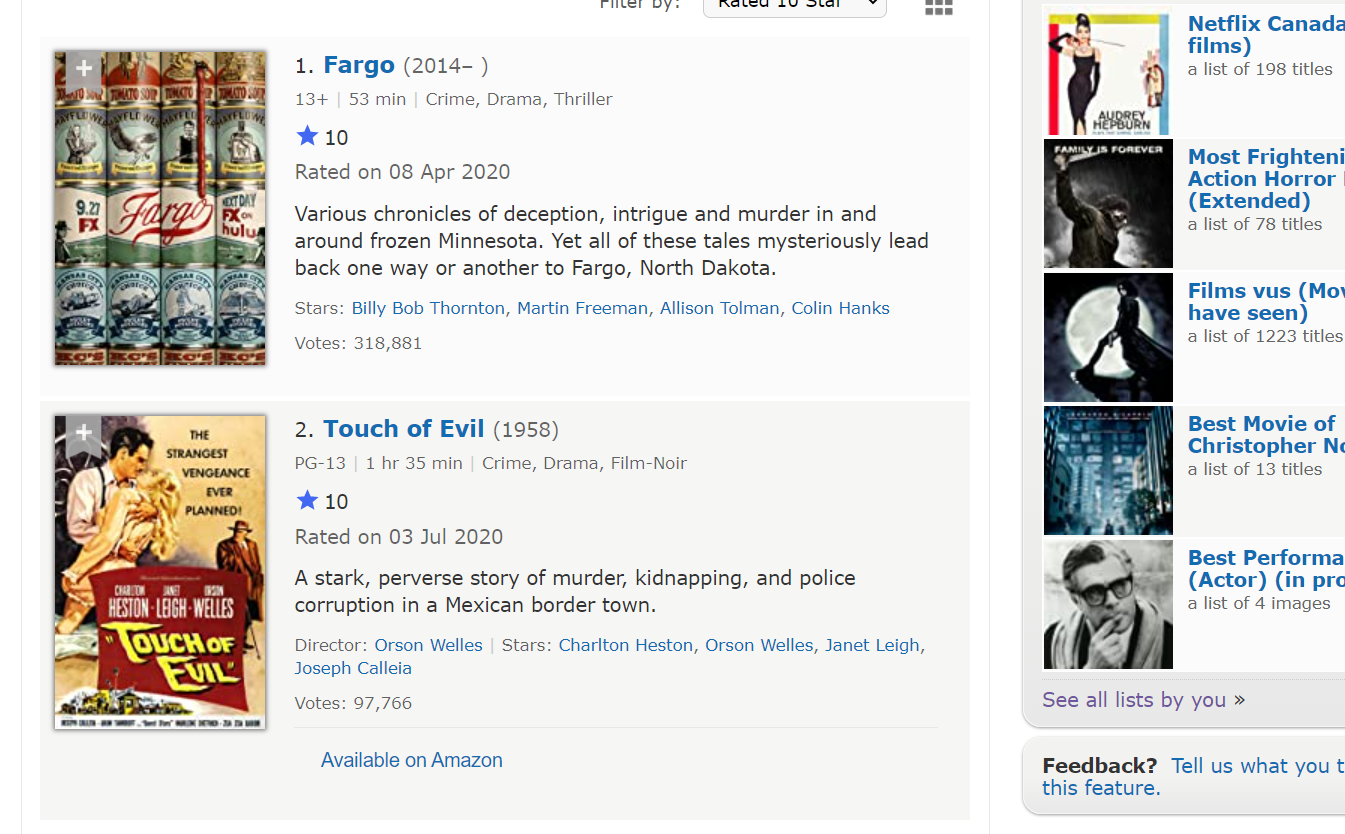 I don't remember saying that Touch of evil was a bad film, not so long ago, my profile picture was Charlton Heston as Mike Vargas!!

You didn't say it was a great film either. But thought a still picture from Touch of Evil was less worthy than a still from Citizen Kane to represent Orson Welles in the poll. If you don't want people to make inferences or assumptions, I would be more specific in your questions or comments.  I probably attached some of own feelings about the film, as it moved up a rating point or two when I saw it again as a re-release Director's Cut.

First, In my point of view, a film can't represent the Oscars won by another film. If none of the images are good you can upload one.

At first, I didn't mention my opinion on Touch of Evil because it is irrelevant.

BTW, my ratings have always been public:

The poll is about people who have high level diverse skill sets and asks who is "most impressive talent on both sides of the camera?" The Oscar nomination by that person is simply a condition to narrow the pool.  Those skill sets don't start and stop on work that is recognized. Sometime, the work that isn't recognized is vastly superior and the work that is well below thier usual standard.

While an ideal person image could recognize a role that speaks to both the question and condition, it sometimes not possible. Yes, if none of the images are good you can upload one. I have striven to do so by posting centered, well-sized head shots. But, sometimes that it easier said than done, as was the case, when this poll suggestion was first created.

In my opinion, given the differing levels of film knowledge of poll takers, the primary purpose of the image is to help poll takers identify or associate a name with the person they have seen. That is why sometimes a more identifiable role trumps a more Oscar winning or nominated role, if it speaks to more people or better helps them put the face with the name. Ruth Gordon in Harold and Maude (1971) or John Huston in Chinatown (1974) are too good examples. Neither role was deemed Oscar-worthy nor the apex of their careers or representative of their careers were all about. Despite, this I wouldn't be surprised to find in many movies goers mind it this first thing that comes to mind when hearing the name.

Regardless, I was able to achieve these goals to some degree and incorporate your feedback. I swapped out a couple images with ones that focus on the Oscars more and still focus on key projects, even though in few it meant a trade-off.

P.S. (other than Citizen Kane) I still would recommend being more specific, as I don't know which ones don't match, in your opinion or even what your requirements are for them to be matched.

As of 2020, thirty-seven individuals have career feature Oscar nominations in front of the camera, as well as behind the camera (thirty-nine, if you count Peter Sellers' and Christine Lahti's shorts).

@rubyfruit76, I corrected part two and made similar adjustments to part one.

As of 2020, thirty-seven individuals have career feature Oscar nominations in front of the camera, as well as, behind the camera (thirty-nine, if you count Peter Sellers' and Christine Lahti's shorts). 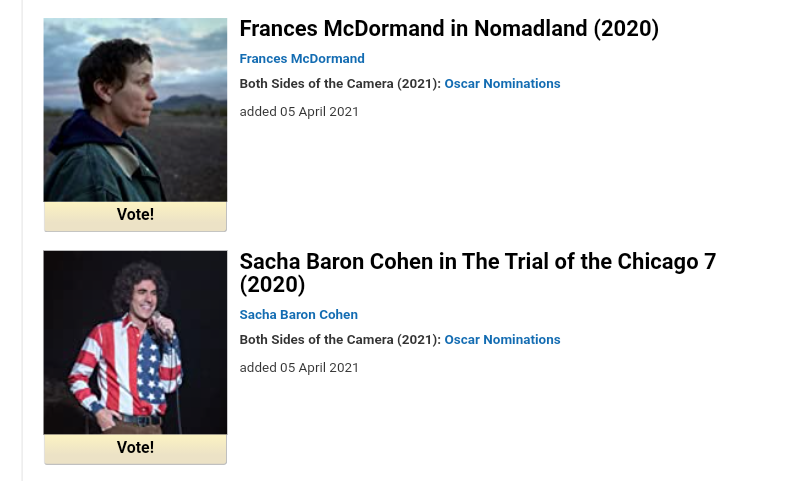