Song in The Joker film

This is doing my nut in, and I cant find the answer anywhere, so I will put it out to the floor incase any one of you know or knows how to find out online? In the Joker film, there was a song used which I knew all the words to it, which I have now found out is 'Smile' by Nat King Cole, I dont own any of his songs, and my brain is insisting I know it from a film which I have watched many times before, which is the most probable answer, according to Wikipedia it was originally in a Charlie Chaplin film which I haven't seen, let alone many times, anyone know what film that song is in other than The Joker or Charlie Chaplin film? It's totally bugging me

I know it's in the movie Hope Floats, but it's the Lyle Lovett version.

Thanks Doris, but I have only seen that film once, and it was definitely Nat King Cole singing it. I am about 99% sure though that it is a romantic film, I thought it was 'Sleepless in Seattle', because Tom Hanks keeps popping in my head as an association with it (though not guaranteed) and I have seen that film many times, but it wasnt, so I tried 'You've Got Mail' as seen that many times, nope not that either, and its driving me mad

If the song title were longer and had a less generic word, I'd suggest using Advanced Search: 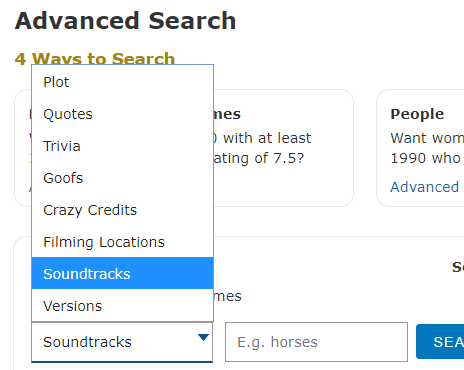 But since you already know that the song is associated with Nat King Cole, you can use the Soundtracks section of his filmography to find that the writer is actually Charles Chaplin:

Then use Chaplin's Soundtrack credits to see other titles where the song is used.https://www.imdb.com/name/nm0000122/(IMDb is a user-contributed database, so not all titles have complete Soundtracks. In other words, the list is almost guaranteed to be incomplete.)Apparently Joker (2019) used a LOT of Chaplin music:

Ok, well thank you I now have my answer.

I am way off on my 99% so it's just aswell I had the 1% left to play with lol It isnt Tom Hanks, and it isnt a romantic film but it is a nice film, and it isnt Nat King Cole either who singing it

So, what title was it?

What about that?
Search words: Smile Chaplin

Jerry Lewis always sang Smile at the end of his annual telethons for Muscular Dystrophy.