For I don't know how long, submitting an aspect ratio of "16:9" to a TV series/movie results in the incorrectly formatted "16 : 9" (space on both sides of the colon) appearing on the site. I've pointed this out in my update comments a number of times, but still this bug hasn't been fixed, why?

Thanks for reporting the spacing error, I have reached out to our technical staff who will take a look as soon as they can.  Once I hear information on any updates I will post the status here.

I agree that this technical info needs some refinement. The guide is clear about the two different ratio formats for TV titles or films. In short:
The following results are taken from the plain text file technical.list (2 Oct 2015):

Those over 500,000 aspect ratios are represented by 318 "different" values of the field where they're saved, which I've classified into 5 categories/types:

Given that the two first categories ("film-like" and "TV-like" ratios) cover 99,94% of total aspect ratios, I'll stick to them. There are two reasons why I humbly say that this info could be scrutinized better before publishing:

A) INCONSISTENT FORMAT OF THE RATIO
The representation of the ratios is fairly good, following the patterns "A : 1" and "A:B" advised/dictated by the guides most of the times, especially for "film ratios". However, about 5% of "TV ratios" are not formatted properly, either because a mistaken original submission or because IMDb itself processed it the wrong way (see the bug explained by rederiet above).
B) DISCORDANCE BETWEEN TYPE OF TITLE AND TYPE OF ASPECT RATIO
Here is where I see more inconsistencies. If guides were observed, one would expect a "film-like" normalized ratio for films and a "TV-like" ratio for TV titles. However, this is not the case, especially (again) for TV titles, where over 75-80% of them receive a normalized ratio: 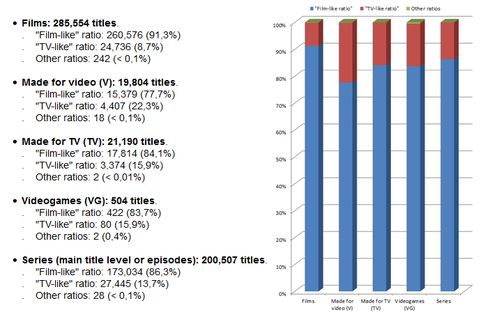 Therefore, I would draw some conclusions:
I hope this helps to find a good solution...

Apologies for the delay in replying here.  Unfortunately, the fix will require a more extensive investigation and cleanup, we don't have the resurces to fix this use right away, but it has been added to the road map for an upcoming sprint.  Thanks for your patience in the meantime!

OK thanks, then at least I know it's now a known issue.