Hi,I uploaded IMDb datasets as of 30th March 2019, timestamped around noon GMT.I understand title.basics to be the backbone of the sets, listing all titles.But I notice in this version that the last one is tt9916896, when I am positive that IMDb has crossed the 10,000,000 threshold in February, or maybe March.
Is IMDb aware of this?

Hey, Vincent:Note that, despite the ttconsts contain a numerical part, they are sorted alphabetically... 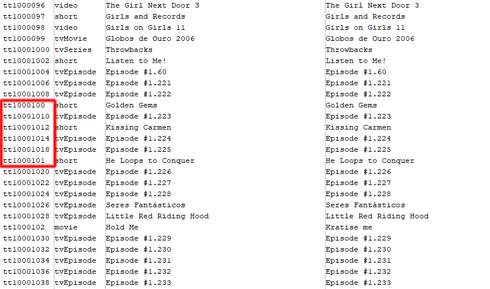 You're right. Currently that's the largest gap (84,103 blank pages) between two tconsts on

.As of today's afternoon the highest tconst was tt10136648 whereas there were 5,769,583 unique titles, so around 43% of the tconsts are unoccupied. Well, that's only partially true because some of them can actually redirect to a higher tconst after a merging, so are not really "empty". However, since all titles added since a date some years ago have even tt numbers (from tt2404814 onwards) most of them are in fact blank title pages. Moreover, the most frequent distance between two tconsts is 2 (gap=1; 56.7%) while only 2,212,421 tconsts are consecutive to the previous one (gap=0; 38.3%).That also explains that larger-than-1 gaps between tconsts (as a result of delete/merge processes) are mostly odd numbers (even[hi]-even[lo]-1=odd), as can be seen in the following graph (note the log-10 scale for the Y-axis):

The gap leading up to the switch to eight digit numbers may be because the sequence that allocates numbers was updated manually at a time when the relevant staff would be around to make sure there were no issues when the tconsts became longer. I suspect that the software team and the data editors had a carefully planned event where the sequence was updated and then the flow of the incoming titles was watched very carefully to ensure that everything was working correctly.