Please see https://getsatisfaction.com/imdb/topics/help-with-the-jeffersons-season-4-picsThe above # was rejected while trying to fix this huge problem. Please also look at #190710-214143-080000  which was to fix the runtime of a 3 part episode. I have anecdotal links that would suggests it should be shown as one episode vs 3 separate ones. If it's going to be 3 episodes, then the runtime must be that of one episode not three. As backup:https://the-jeffersons.fandom.com/wiki/Season_4https://en.wikipedia.org/wiki/List_of_The_Jeffersons_episodes#Season_4_(1977%E2%80%9378)

Thanks for reaching out about this, do you further links beyond wikipedia you could provide us for this? Thank you!

holy cow. I wish it was as hard to post bad info as to correct it.
Not sure if you're trying to help with the on-going image issue or the length of time on the episode.
I hope both and the link to the other thread has evidence of why the images are wrong.


For the length of time, I actually think it should be listed as one 90 minute episode, but I figured that would be harder plus I don't know for certain that it was shown in segments of 3 shows although all the sources below might suggest it aired as one lone episode.https://the-jeffersons.fandom.com/wiki/Season_4

A clip show. Louise and George have yet another one of their infamous fights which leads to Louise storming off to the Willis'. Soon after she leaves, a burglar holds George hostage and ties him up. Louise also gets tied up when she returns. This leads to George and Louise reminiscing about their lives and the time they've spent together.

Somebody is screwing with the pics I'm trying to fix. If you see the two images below showing the same image on two episodes, but I had fixed these and someone has now mucked them up. Makes one want to give up. Very frustrating that someone could mess these up when they can easily be determined as wrong because of the guest star in the pick. It seems they were more easily able to mess it up than I could try and fix them. 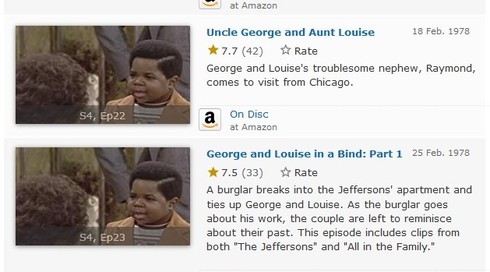 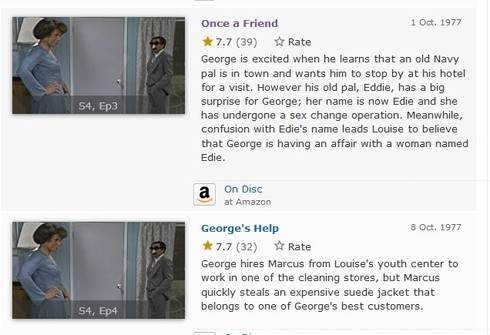 And to show I fixed them: 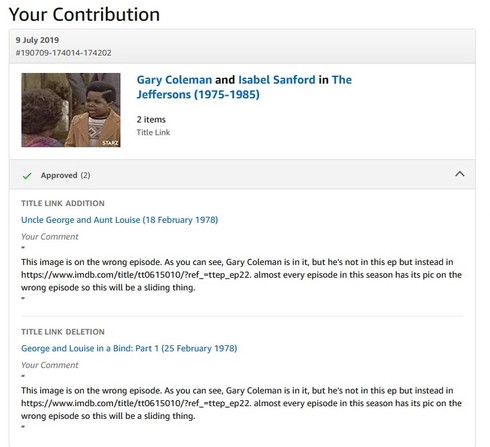 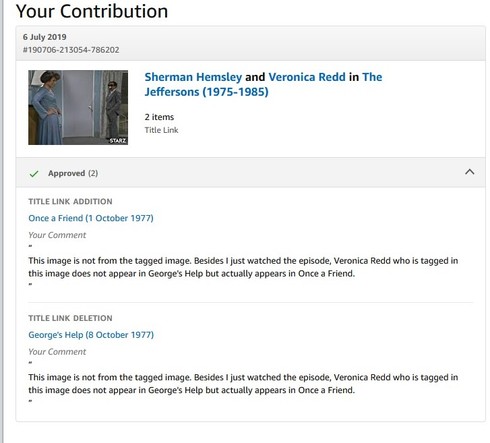 wow. guess that takes me back to my original question from long ago that is how is the best way to fix this problem???? If I had any of these recorded I'd try putting in new images, but don't have that as an option. oh well. It makes me just want to give up.

lol. took awhile to get the answer, but they are 100% allowed.And none of these images are mine, I'm just trying to fix the images to the correct episodes.seehttps://getsatisfaction.com/imdb/topics/need-help-on-some-rejects-pleaseandhttps://getsatisfaction.com/imdb/topics/so-are-the-only-station-logos-allowed-original-onesbut I will tell you in practice it seems some are rejected for this reason.(One of the links above was to delete some of these jeffersons' starz watermarked ep's and the submission was declined which I think gives extra backing that network logos of re-broadcast are ok.)And one of several I submitted that were rejected 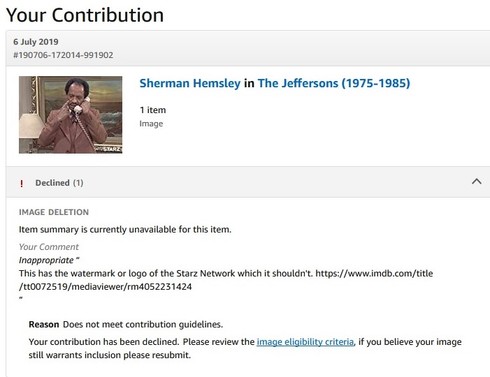 Just to clarify, those shouldn't be considered as third party. Those channels will have bought the rights to broadcast the show, therefore the images are eligible. "Third party" in this instance refers more to other direct image owners if that makes sense.

I can agree with that Ed, but I think I might understand a little better with Will's info. I think it helps me a little with some other images, but heck if I know.

It's hard to say without seeing an example, but that doesn't sound ideal. Like I say we would prefer none at all, but any official distributor channel is eligible.

thx. Will. Trying to move another bad image. If there is a faster why I'm all ears cuz this is the pits.

Is it possible to move an image from a title that only has one image? It doesn't seem like it can because of the primary image thing, even if the image doesn't belong to the episode. Fixing this thing of the Jeffersons is such a pain there has to be an easier way.

In these cases if your delete isn't accepted its best to use the Contact form to report it directly with staff.

I got one fixed via the contact form. Don't remember about the other.
Question: Was it likely someone undid it, or is there some biz rule that caused this to happen?

For the record, it was for duplicate issues that I was asked to use contact thing unless I'm mistaken. (and if you read thru the above, the original question on this post was about length of an episode and it wasn't even an image issue. I did ask if someone was screwing with what I had fixed and then asked if there was a way to fix this peculiar issue with the jeffersons in that there being only one image and it's wrong but because it's the only one it's also primary and if there is a way to fix it. There wasn't a question regarding a specific contribution/rejection.)And where Will asked me to go is greyed out and doesn't let you email about duplicates so it becomes a circular issue saying to go to a place where the option isn't available.For what I'm talking about, seehttps://getsatisfaction.com/imdb/topics/need-help-with-190721-170407-625502I asked for clarification and haven't gotten any as to why the email link is greyed out. Ed, maybe you'd like to take a crack at that????But I have asked other questions trying to get some clarification, fix self credits, understand some things, get better eyes, etc.I just looked and I've only asked two image questions, and that's in the past two weeks I believe.  One was from a prior issue - "I now know which is the correct".  The other related to the jeffersons where seeing the prior info I felt was also needed. Unfortunately GS screwed up on me about 3 weeks ago causing me to post the same issue multiple times. I posted it and it didn't show up. So I posted it again and nothing, and then again and again nothing, and then all of a sudden they all appeared hours later. Had I seen they showed up before there was a reply I would have deleted them, but they showed up over 2 hours later when I was offline.And I have used the contact thing with success which is why I've not posted other things here.I'd encourage a rewrite and a change though to how rejects direct someone because they direct people here to gs and not to the contact form so until earlier today (or might have been yesterday) I had thought imdb wanted people to come here in general as a first resort to begin with regardless.And just to show the greyed out email link, here is that pic that maybe someone can determine why it is grey out. Am I not supposed to be seeing a greyed out email link? 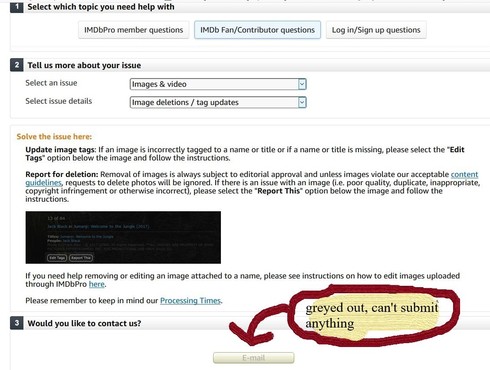 Apologies, I missed your response there.

It looks like the contact form options have since changed, another level has been added since then. See my screenshot below. 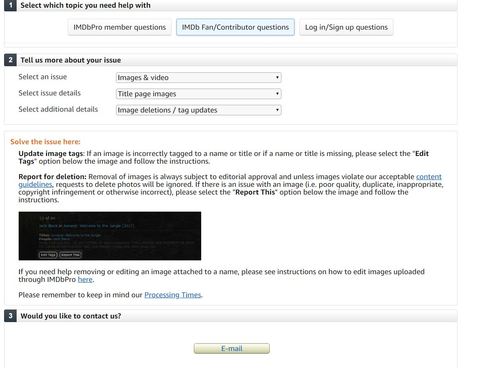 If for any reason this option still isn't available please select the Other image/video issues option and the E-mail button there. 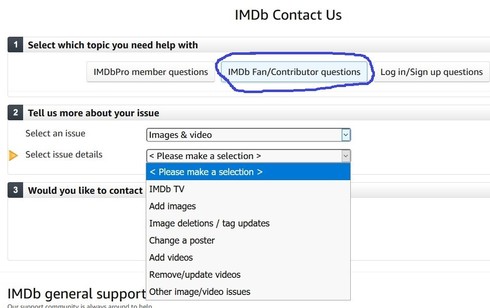 I see you posted this screen grab last week.  Can you check the Contact Us form again and let us know if you are still seeing the same drop-down selection as captured above?

Just check and I am.  Should I not be?If I'm not, I'm getting to it byhttps://help.imdb.com/contact
then select imdb fan/contributor; then images &Video.
In case it helps, here is the issue list I see. Thx
(I've been using Will's suggestion to just use other with good success.) 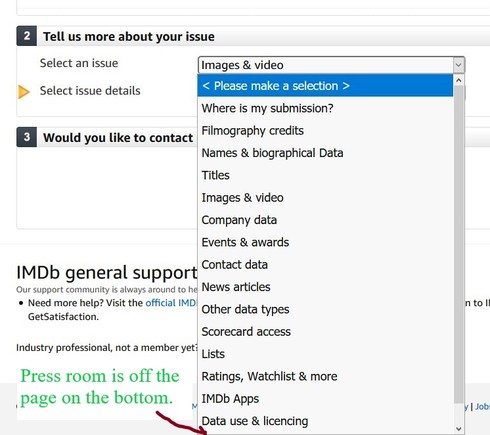