Tried to remove false air-date for "The Arrival of Raditz"

There are two seperate pages for the Dragon Ball Z anime. One is for the original version that aired on Japanese television from 1989 to 1996, another is for Funimation's English adaption which aired from 1996 to 2003. Somebody added a 1989 air-date for the first episode of Funimation's dub, "The Arrival of Raditz", when the actual air-date is 1996. I tried to remove this made up air-date (which makes it seem as though Funimation's dub aired from 1989 to 2003), but my change got rejected. I want this false information removed immediately.

Have you got a submission reference and I can take a look? 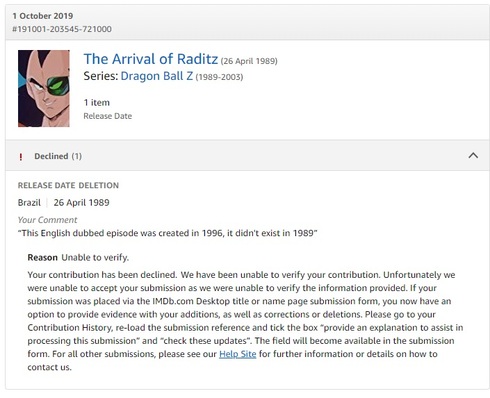 Thanks I can see that the release date has since been removed. Thanks Bulma, been a while ;)

Hi Will!
Thank you very much :)