It used to be when you would input a name and it didn't match exactly, the suggested names would should all of that persons alternate. This doesn't happen any.

So, in the picture above, Obed Baloi is a correct match. It used to be that under his name it would show something similar to "aka Baloyi, Obed". This would have let me know immediately he was the right person instead of having to open his page to search for an alternate name.

I don't think I'm misremembering this from before the site change but I could be. If so, it's a good suggestion for a new feature.

I casually re-check pages anyway to know it is a correct person, but yes, this feature is a bit lacking.

Adrian: This problem may be related to the problem in the thread at https://getsatisfaction.com/imdb/topics/-does-not-have-any-existing-credits-in-this-section-not-work.... It's not the same thing, but it is another problem with the name suggestions.

Thanks, yes, looks that way.  We have connected this thread to the same ticket.

This reply was created from a merged topic originally titled Search suggestions.

I absolutely agree. Not only suggestions no longer display the NAKAs that match the search term (which in many cases forces us to check many more results than before to find the correct name) but the search engine isn't even capable of including NAKAs on its algorithm.

These are the three most recent examples I've come across (in increasing order of OMG!

If the suggestions system is not revised, I'm anticipating a huge number of inappropriate "This is a different person" requests...

Note: This conversation was created from a reply on: Search: Add name aka search function.

This reply was created from a merged topic originally titled Search suggestions.

This is still a serious ongoing problem...Here's my latest experience, a few minutes ago, when I was trying to add some Catherine Rose as a foley artist to the Sound department of Underworld: Blood Wars (2016): 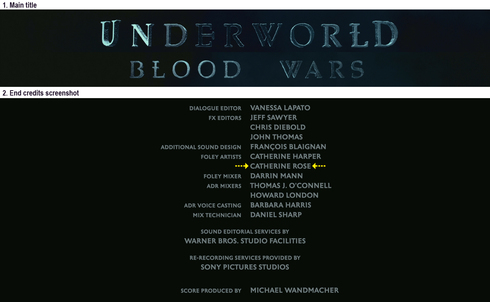 These are the names offered by the suggestions system: 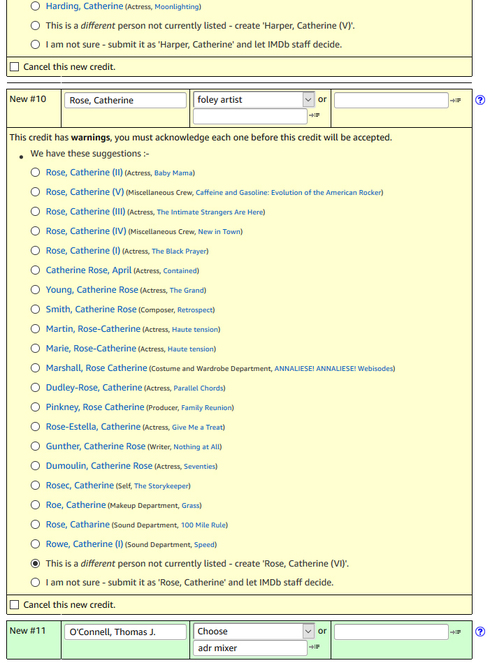 The five exact matches are displayed first (understandable), despite none of them has "Sound" as their primary job. Then, 15 names appear,of which only 2 are known by their sound work... Since primary jobs aren't necessarily exclusive I even checked all the five exact matches to verify they never worked in the Sound field. As you can see, I was about to create a sixth instance of "Catherine Rose", but I thought it weird that she was the only person credited in that department who didn't have a page, so fortunately I was cautious enough to perform a collaborations search (via Google) and Katherine Rose (I) quickly shows up:

Note that she's a person with a vast experience in the Sound department (Emmy winner, STARmeter around 200k). Also, that's the only department where she has credits. And also, she's been credited as "Catherine Rose" in over 40% of her titles (35 of 81). Moreover, if you type "Catherine Rose" in the standard search bar, you'll get Katherine Rose (I) as the second suggested result.

So, how is it possible that she doesn't appear as one of the 20 suggestions of a tool that is supposed to help in the contribution process?Again, the system seems to prioritize similarities in spelling (with a very narrow detection range of paronyms, by the way) over jobs, which actually wouldn't be a bad decision if: a) NAKAs were included in the search algorithm (if they're already, exact NAKA matches are not currently being pushed up accordingly...). b) Such NAKAs were shown under the primary name suggestion (as it was before the changes; I refuse to open 20 name pages every time the on-screen name doesn't match the primary name, but the NAKA). c) Management of paronyms were improved (Catherine/Katherine).This time I was lucky and didn't create an unneeded new name page, but I wouldn't like to imagine how many times I couldn't avoid so...Cheers!

Note: This conversation was created from a reply on: Search: Add name aka search function.