I like to look through The Simpsons episode ratings here while I'm watching the show.  It always seemed to be pretty much on par with what you'd expect ratings-wise if you're a fan.  However, lately this has not been the case.

Recently, there has been a drastic ratings fluctuation on certain episodes.

I found it funny that now, all of a sudden, some of the most widely-accepted "best episodes" are rated quite poorly (Or at least very 'average.').  Additionally, I've been seeing certain episodes that have been widely panned, rated very highly.


RATINGS DROP
Let's start with the episode "Marge Vs. The Monorail."

This is one of the most universally acclaimed Simpsons episodes of all time, and it's a rarity to not see it on anyone's top 10 list.

As I started to investigate, I checked the ratings breakdown graphs. [http://www.imdb.com/title/tt0701173/ratings?ref_=tt_ov_rt]

If you look at the second graph, with the red and blue, you'll notice that most of the female age groups voted very low, around 2.5 average.  If you look at the episode ratings graph immediately before or after the "Monorail" episode, you'll see the male and female groups are more in line with each other and much less lopsided.

I would bet that if an admin were to investigate this, you would find a point in time where this episode rating got flooded with "1" and "2" ratings in a short amount of time.


RATINGS SPIKE
I've also noticed this tampering for episodes with previously low ratings.  Let's use "The Principal And The Pauper" for this example.

Previously, this was rated a low "6."  Now it's an 8.4.  Once again, if you look at the second graph on the ratings breakdown page, [[http://www.imdb.com/title/tt0701257/ratings?ref_=tt_ov_rt]] you'll see that the female age groups all rated very highly, a 9.6 average. (Much higher than the male average)  And also, once again, if you look at the breakdown for the episode immediately before or immediately after this one, the ratings breakdown is more even and less lopsided between genders.

And again, I would bet that if an admin were to investigate this, you would find a point in time where this episode rating got flooded with "9" and "10" ratings in a short amount of time.

It probably goes without saying that most of these episodes that have been tampered with also seem to have 400-500 more "votes" than most episodes.

LIST OF (Possibly) TAMPERED EPISODES
Here is a list of just some of the episodes that seem to have something fishy going on.


For the record; I don't 'hate' the Principal And The Pauper episode, and surely don't consider it the 'worst episode ever.'  I do however, find it hard to believe that it's rated a whole point and a half higher than a classic such as "Marge Vs. The Monorail," when it used to be the other way around just a short time ago.

This post isn't about which episodes are the best or the worst.  I've just noticed some suspicious things lately while going through them.  I could be completely crazy for bringing this up, and everything really is how it should be.  I don't think I AM crazy though, because I've noticed these drastic changes without even looking for them.  Maybe it's worth someone looking into; this is all I'm saying.  Thanks for your time.


Although there is no way to see a full history of ratings,
some partial history can be gleaned from page snapshots
via the archive.org Wayback Machine.

Great info, thanks.  For the record, I did do a search first.  I figured I couldn't have been the first person to notice this!  Thanks for the reply.

I agree with you. I believe that it's pretty clear that there has been a deliberate manipulation of the ratings and here are some supporting evidence of it.

(My English is not good enough to explain it perfectly, but I'll try my best)

As Lucus has noted, while it is true that we don't have a full history of ratings, there are several snapshots of the episode list (with ratings and number of votes) of the series at the Wayback Machine, and some interesting analysis can be done. A first inspection suggests that the fraudulent voting probably started at around mid-2013. I've collected data of the first 9 seasons of the series, ignoring web captures dated earlier than 9-10 years after the ninth season aired (aiming for a "steady state" far from the initial hype). Then, I've defined two periods of study:
For each time point we have the average rating and the number of votes/users until that point, so we can calculate the number of new users between two time points and the average rating of those new users during that period:

The following graph represents, for every episode of The Simpsons, the number of new votes between december 2011 and november 2014 (period 2) in terms of percentage over the users at the beginning of the period (it also displays the percent variation of average ratings during that time, but I'll talk about that in the next paragraph):

We see that the increase of new users during those 3 years has been more or less similar for every episode (median 98%), except for several noticeable peaks that suggest an "abnormal excess" of votes in some episodes. Well, as this could be just a coincidence or a passing fad, we should assess whether this "bump" has an effect on the average rating of the episode or not. A possible approach is to measure the percent variation of the average rating within period 2 and compare it with the percent variation of the rating within (base) period 1.

I've selected the episodes with a percentage of new users higher than the median (those whose bar surpasses the horizontal line that indicates 98% in the graph from above) and will calculate the percent variation of average rating during period 1 (as a reference for a "non-hacked" period) and period 2. An episode with a high percent variation (in absolute value) will be highly suspicious of having been strained, specially if it has received a suspiciously greater amount of votes. Two preliminar comments:
The following graph represents, for the episodes with a greater-than-median increase in votes, the percent variation of average ratings during March 2008-December 2011 and December 2011-November 2014:

There's a notable difference between both periods. Between March 2008 and December 2011 the average rating of all the episodes (mysteriously, except for El Viaje Misterioso de Nuestro Homer (#8.9)

) hasn't varied more than 4.5% (and half of them don't even change more than 1%). This find is consistent with the expected behaviour of a non-biased voting system. However, percent variations of average ratings during the second period are much larger (60% of cases show changes higher than 10%), suggesting a fraudulent distribution of votes during this time.

I've defined arbitrary thresholds to get a list of episodes with a fabricated rating (although I believe that there are more than these):

Many episodes from seasons other than 1-9 have suspicious ratings as well, but I didn't want to elaborate so much. In conclusion, I concur that

should investigate this (factual data invites to it).

Also, FWIW, note the differences between the "US" vs. "Non-US" rating patterns for that episode.  (Of 2184 votes up to the time of this reply, 1796 are regionally identified as US or Non-US.)   A majority of the "1" votes for that episode are from US users. 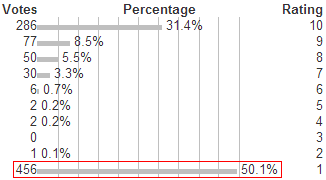 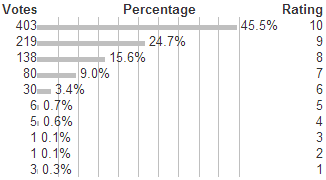 Thanks for the detailed reports.  The appropriate team have been notified.

This has been addressed now, thanks for the problem report.

Great, thank you!  It would be a shame to steer new fans in the wrong direction.  :)