I was commissioned to compose music for the silent film Little Annie Rooney (imdb.com/title/tt0016028/fullcredits), which was shown in theaters and broadcast on TCM this year; the soundtrack was also released on iTunes this year. I tried to get my credit added with the attribution (2016) but it was rejected. If you look at the full cast and crew, you'll see there's a composer named William P. Perry who wrote a score for a version released in 1976 and he's credited on IMDb with (1976) next to his name. I'm trying to add the exact same sort of credit.

I contacted the IMDb help desk and was told that my credit was rejected because they "only store data that is reflected in the credits of the original titles" and "try to be as consistent as possible" about sticking to their policy. But I think I have shown that what would be most consistent across the site would be for silent film composers to be credited on IMDb as they have always been credited.

I was told that I might submit this suggestion to the IMDb Support Community that silent film composers be credited this way (the way they already are...) - what are your thoughts?

You may indeed be correct sir.
Maybe imdb staff can shed some light on why William Perry is credited as 'music by 1976' for a 1925 silent film. 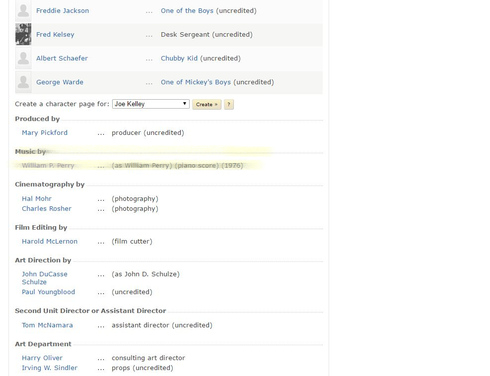 I think that your best way of tackling this is to add another release date (limited) to the film.
Then you should be able to add your name as composer for that release.

An addendum to this.

William Perry did not compose music for the film 'Little Annie Rooney' he composed Music for Great Films of the Silent Era, Vol. 2 (The new orchestral CD of music by William P. Perry​Ireland RTÉ National Symphony, P. Phillips)
This was not a re-release of the film but purely a CD of music.

The entry is incorrect and should be deleted.

He did not compose a track for an alternate version of Little Annie Rooney. He composed music that was sold on a CD.
Can you show me where the film was shown in 1976 with his soundtrack.
The entry is incorrect.

Hello,  I have a similar issue.  Recently I was hired to score 2 silent films from the 1920's.  (and 11 shorts) The films (and shorts) are being shown at festivals and at Silent movie house and museums in Los Angeles and other places Domestically and foreign (so far France and US).  My attempt to list my credit as COMPOSER has gone without success through IMDB.  What would be the way to get them listed?  Would I need to RELIST the film as it is the film in its final fully restored version of the Academy of Motion Pictures Art and Sciences?  How would I do that?  The titles have never changed.  Thank you for any help in this matter.  Cheers,  -terry Huud

Terry: While this rule has not always been strictly enforced by IMDb, my understanding is that your work as a composer for these films from the 1920s would normally not be eligible for IMDb listing because it was not done and credited until long after the films' original release. See http://www.imdb.com/help/search?domain=helpdesk_faq&index=1&file=eligibilitytopfaq:

Though IMDb normally only lists credits from the original versions of most titles, music for films from the 1910s and 20s have normally been an exception to that guideline - this norm was established with hundreds of silent film score credits in the past.

IMDb has a long history of crediting silent film composers this way all the time - it's reasonable, it's very easy for IMDb users to understand, and there's no reason to begin rejecting these credits.

Gromit: It still would be great to have some guidelines for the issue. I believe Col opened a ticket for this?

Is there any movement on this? It is so frustrating. My manage wants to know WHY I cant receive credit for the films I scored. Its hurting my hireability. IMDB ignores all of my queries. As a Pro IMDB subscriber I think it is unfair.

I would like to know why I can not get credit for the newly restored Silent films I have provided scores for.  I see that in 1926 (The Magician) a silent film was scored by Robert Israel (http://www.imdb.com/title/tt0017103/fullcredits?ref_=tt_cl_sm#cast) He was NOT part of the original 1926 crew as he did not score the film until much after the film was produced.

And yet my credits to the newly re-mastered Willis O'Brien/Dawley films, "The Ghost of Slumber Mountain" (1918) and "Along the Moonbeam Trail" (1921) are being denied by IMDB.  These films have been EXTENSIVELY updated with all new graphics and a full restoration job on each frame. Leonard Maltin recently reviewed these restored films and even mentions me in his article. http://leonardmaltin.com/the-unsung-grandfather-of-king-kong/ ;

I think IMDB should be fair and allow me these credits if others are allowed.

Well, heres the latest from the so called 'Help Desk'. :

"Thanks for your message and for bringing this to our attention.

We do not allow credits for restored versions on our site; we list our filmography items based on a titles' original end credit sequence.

As such, we have removed this other credit as this is not eligible for listing.

Thank you for your understanding."

"Thats absolutely brilliant.  Instead of giving people CREDIT where credit is due. (I spent 6 months writing music for 2 feature films and 13 shorts) you take the credits away.

Keep up the good work." -th

This is opens up a very interesting discussion. If you were left off the end title credits (I don't care WHEN the film was made) you didn't work on it. Or at least, IMDB doesn't think you worked on it.  Now, I happen to know several HUNDRED people who DID NOT receive credit anywhere on the film itself but still keep their credit on IMDB.  Hmmmmmm.  And furthermore, if they want to stick to their END TITLE formula what about all of the ABOVE THE LINE film composers who were not listed at the END but received FRONT titles. I guess they should not get listed on IMDB either.  I think I shall consult my entertainment lawyer.