Should dancers be credited as cast?

I was watching Night School and they list dancer. Usually, I would add dancers if they directly followed the cast but these dancers are after the stunt performers, which are generally not considered part of the cast. I think they should be added to the cast but I want to check before I go to the effort. (Note: one dancer, Skyler Semien, is listed as an uncredited cast member which doesn't seem right since she actually is credited.)

In the picture below, you can see the end of the cast, the choreographer, stunt credits and then the dancers. I think this is close enough to be considered cast. If so, I'll go ahead and add them. 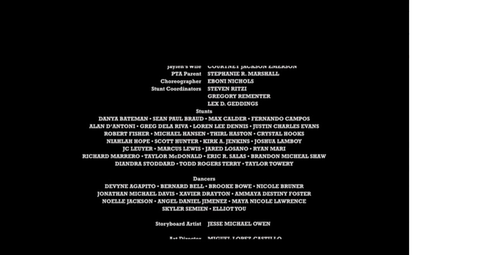 I agree that they should be added to the cast.

Yes.And additional voices also.But title designers used to name the additional voices as "adr group" or "loop group" sometimes... There are a lot of things that should result in punishment or penalties for those who produce such titles ))

I'm speaking specifically of animated titles for "additional voices". These are never ADR credits for animated titles. I can understand the distinction in live action movies.

That really does not answer the question. What is "directly after"? In this case, between the cast and the dancers are the stunt credits. Is this close enough to be considered "directly after"?

In some credit sequences, things like body doubles and stunt doubles are included among the cast, but even so, they would not be listed as cast on IMDb. Extras are considered cast even if their names appear in after non-cast credits. For dancers, it may be ambiguous, since they may be on-screen performers or something like consultants, choreographers or teachers, but it may be safe to assume the former if dancers appear on screen.

This is why I think position dependent crediting is bizarre. Who cares where dancers are credited? They are still dancers and appear on screen and should be part of the cast. In no way are they "crew" where I think of crew as someone behind the scenes that are not seen on screen. (Stunt performers and body doubles somewhat break this scenario.) The same with additional voice for animated title. Making the department where they are credited dependent on where they are credit makes it confusing for everyone. Also, where they are credit is somewhat up to the capricious nature of the end title designer who probably has no idea about IMDb crediting rules.

I have to agree with Adrian that these ”Dancer” guidelines tend to be a bit confusing - or at least a bit vague. I mean ”dancers” are also often part of the concerts, shows, galas, theatre, etc where they perform. Not all are part of the fictional films and musicals from the ”golden age”, starring Fred Astaire or Gene Kelly. It seems that when someone says ”dancer”, people start double checking the old Hollywood films.

But yes, I tend to agree that they should be added to Cast, since they’re performing and ”acting”, more than being ”themselves”. Then again the same could be said about singers and bands on stage. But I guess they’re more like ”themselves” on stage than acting.

Whether this is a problem, or not, but we really should not care about what the dancers are on a filmed stage, because we rely on what is in printed credits.The same is for singers and bands on stage. BTW, they should not be automatically accepted as 'more like ”themselves” on stage than acting', because there are some examples when a fiction band consisted of real-life famous musicians and singers invited from different bands for this specific performance(s).

Often dancers are credited as ”Dancers”. Since they ”dance” (and perform) on the program in some capacity. So how they’re credited doesn't necessary help to solve the problem in these type of cases.

One example could be that the person named ”John Doe” dances in some program. Now, this person is not credited ”right after the cast” for some reason or another (which is IMDb’s rule, I guess - if I understand it correctly). So he should be added to Misc crew/Other crew (again, if I understand it correctly). But since it’s obvious that it’s John Doe dancing and appearing on the screen, should we add two credits for John Doe:
1) Other crew - dancer
2) Cast - dancer (uncredited)

When a person has two credits for one and the same activity, is it helpful somehow for viewers and the movie-base users?

Are you asking me or the IMDb? I was kinda already asking that from IMDb. The point was when a person appears ”on the screen” (clearly identifiable and all that, of course), he/she is eligible to receive Cast credit in IMDb. Misc/other crew is not Cast credit.

In this thread, as well as in the help guides of IMDb I see no recommendations to twice credit a person for same activity. That's why your above question:

But since it’s obvious that it’s John Doe dancing and appearing on the screen, should we add two credits for John Doe:
1) Other crew - dancer
2) Cast - dancer (uncredited)

sounds as a suggestion here, or a point for further discussion.

Is my question understood now?