I just randomly stumbled across this... take a look at the sound department and music department credits for this title.Can anyone explain to me how it's possible for so many crew members to have both the (credit only) and (uncredited) attributes at the same time? Did they somehow manage to get credit for a job they didn't do whilst simultaneously doing the same job without being credited for it?! It makes my head hurt just thinking about it!I'm not really expecting an answer, or for anyone to do anything about this; it just amused me so I thought I'd share.  (although if anyone reading has access to the on-screen credits for this, they could go ahead and solve the mystery and fix the listings)

Phil: Thanks for catching this problem. Clearly, the software should be updated to prohibit the (credit only) and (uncredited) attributes from being used at the same time.

Hi, Phil and gromit:Fortunately, there aren't many of these... (74 credits)...most of them likely added by a same contributor (Donald S. Foster and Zuzana Cernik have 14 and 4 of those credits respectively...)

Hi all, thanks for flagging and correcting these, cheers!

thanks for flagging and correcting these

I don't want to be the pessimist, but I didn't see anyone stating they're going to correct this. Also, the first item I checked, hadn't been fixed (yet)...Another thing: ljdoncel pointed out that there may be a specific contributor who did this. Is he right and will IMDb contact this contributor to make sure this person knows what the attributes mean? Last thing: Gromit said the software should catch these kind of things. Will IMDb modity/tweak the software so that it will catch these things in the future?

I agree with Marco. We can't correct this without watching the credits of the affected titles, and nobody has volunteered to do so yet. In fact, most of these ﻿(credit only) (uncredited)﻿ entries have not been changed yet.

Thanks all.  Yes, just in case my first post didn't make it clear enough, I don't currently have access to the on-screen credits for these, so won't be making the corrections (honestly, it just doesn't interest me enough to try to track down a copy).

Two years ago (171004-063603-612000) I audited the on-screen cast of 101 Dalmatians II: Patch's London Adventure (2002) (by the way, Eli Russell Linnetz has managed to re-add his 'Additional Voice' credit to the cast section when, as per current guides, belong in Miscellaneous [because it appears on screen quite separate from the main cast; I'm of the opinion that it'd fit better within cast, but...]).

At that time I didn't audit the crew entries (my fault)... but I can confirm now that neither Wolfgang Amadeus, nor Lars Clutterham, nor Shawn Murphy (I) are listed in the on-screen credits. I was about to remove the (credit only) attribute and leave just (uncredited). However, the three are listed (respectively) as electronic scoring mixer, orchestrator and music scoring mixer for "John Debney's additional music", but John Debney, who is himself listed with a (credit only) attribute as well, actually doesn't appear anywhere in the on-screen credits either. 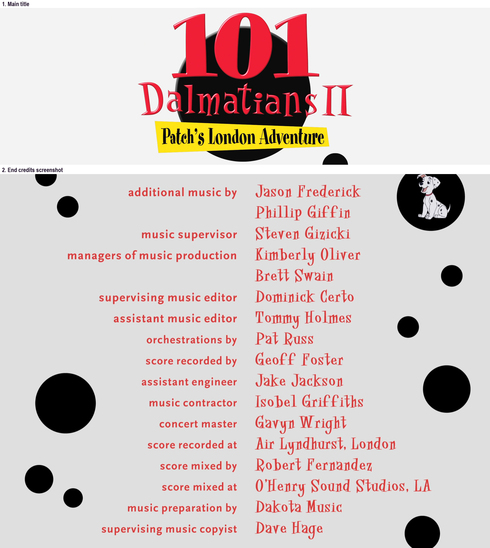 So, for now, I'll just delete the 5 clearly wrong (credit only) attributes, but I'd like an

editor to verify if these 4 names should actually be removed altogether by checking the material provided by the original submitter.Karin Roulo isn't listed on screen as foley mixer either... 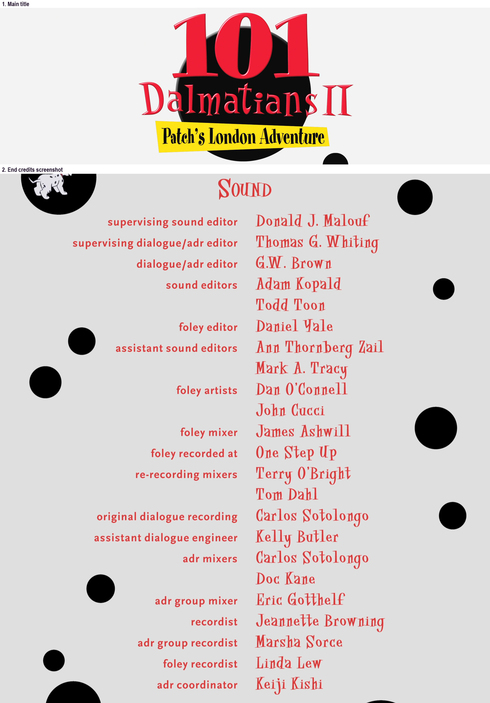 Agreed! While looking at 101 Dalmatians II: Patch's London Adventure (2002), I've also noticed cases......like this one, where a very same person is listed more than once for a very same (verbatim) role, but in different departments...

?? (not red because, for example, a person could work as production assistant in both Art and Sound departments)...or this one, where a very same person is listed more than once in a very same department for a very same (verbatim) role, but with different attributes, most frequently (as...)...

??...or this one in "Greatest Party Story Ever" (2016) {(#2.3)}, where a very same person is listed more than once in a very same department for a very same role, but with a different capitalization (see related thread):

►Proposed solution: Auto-correct capitalization and re-check??I performed a very rough search and found more than 70,000 instances of credits that meet one or more of the aforementioned situations, so I support Marco's idea of improving the software so that it will catch them during the contribution process.Cheers!

I sure hope a staffer will respond to this. That being said, this thread is marked 'Answered'...

By the way, does anyone know: are there people other than staffers (Champions perhaps) who can change the way a thread is marked?