"Or go back to" link problem on contribution pages

The link back to a Name or Title page at the bottom of contribution pages recently became unusable.

-Start at any name or Title page, click the Edit button

-Select any category to Edit

-Scroll to the bottom, and right below the "Continue" button, you'll see a link back to the page you came from

That link is still there at the bottom of all subsequent pages, but it no longer links to any name or title page. 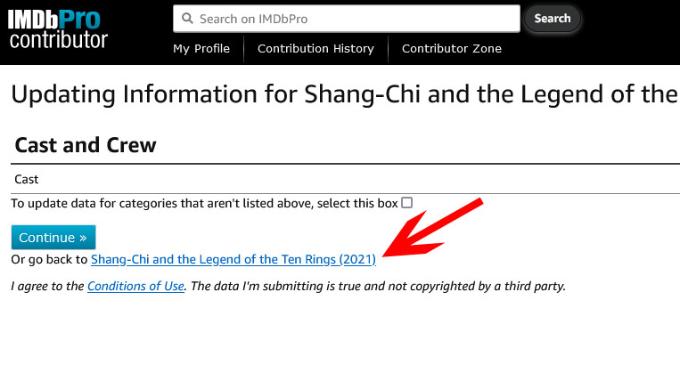 It's been happening for at least 12 hours

Seems that several hours after posting this problem, it's been fixed.  Daniel, can you verify?

@ron3 Yes, it seems to be fixed, although I've only checked it once.

I've just come back on here expecting to see a load of notifications, mainly on a post from someone who I suspect is the director/writer/producer/editor etc of a short film, but I have none.

He's tried to falsify the release dates of his short film (and had apparently been trying to "correct" for months), which he claimed said January 2020 on IMDB, but didn't finish production on the film until September 2021, and should've had an April 2021 release date, which makes no sense in itself, as I suspect he meant to say they didn't finish production until September 2020.

It actually had a 2nd of February 2021 internet release date on IMDB, and had 2 official trailer links for Vimeo which he claimed in the IMDB description were from April 2021.

I archived all the links on IMDB one by one on Archive Today too, along with the IMDB page itself, just in case any of them go missing, not that there was any need, as like I said, the original 2020 release dates are everywhere online.

I would've saved them all on the Wayback Machine too, but it's not working again. It seems stop saving stuff at least once every single week.

That Sprinklr post from the filmmaker claiming that the release dates were incorrect has since disappeared.