Ofra Haza not credited with singing in The Governess

I see her listed here:

Thank you so much for pointing this out on this page, however, when I look up Ofra Haza's own IMDB page there is no mention that she sings on The Governess. Shouldn't it be added to her page?
I thank you for your time,
Chris

Under Filmography, her credit is listed in the Actress section.

I see that, but it seems a little incongruous that you need to pull up the actress category and not see it immediately under soundtrack, with all the other soundtracks - I don't believe she "acted" in the movie, or did she?

I don't believe she "acted" in the movie, or did she?

According to IMDb definition of actor, she did...

The term "actor" covers everyone whose image or voice appears in a recognised title. This would include documentary subjects, hosts, narrators, athletes, or other people not "acting" in the traditional sense.

Regarding voice credits (as it is Ofra Haza's work in this title) they must fulfil four criteria to be listed in the cast section:

[1] They must have received an on-screen credit (i.e. no uncredited performances).
[2] They must have been credited in the cast section of the end titles (i.e. no 'background voices' or adr work). Additional Voice credits are permitted for animated titles or videogames as long as they are listed within, or immediately after, the main cast list.
[3] Adr/looping/background voices must be submitted as Miscellaneous (Other) Crew credits. When in doubt, send it as a Miscellaneous (Other) Crew credit. Announcer credits for non-fiction titles (game shows, sporting events etc) should be submitted as Miscellaneous (Other) Crew unless they are credited in the cast section of the end titles. If the person is playing the character "Announcer" they should always be listed in cast.
[4] Their work must be featured in either the original language version of the film or (for animated titles and videogames) on the USA English-language release (i.e. no dubbing credits). 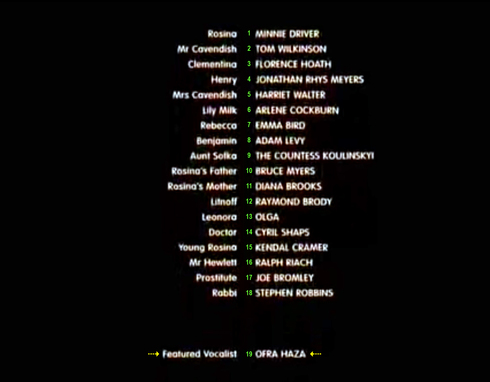 The credit meets rules [1], [3] and [4]. It could be argued that Ofra Haza is not credited in the cast section (thus breaking rule [2]) so she wouldn't qualify to be listed there on IMDb. However, her name then should be moved to the Music Department, not under Soundtracks. The only way for her to appear in the Soundtracks section is to submit the songs featured in the film to the title page and connect her name (via qv links - see this guide). Unfortunately, the on-screen credits don't display a soundtrack list but, if you were able to identify the songs, you still could add them with the (uncredited) attribute.