This seems more like a trivia item, which I did enter for the movie but not sure how blacklisted writers should be handled once their credits are restored in the movie. 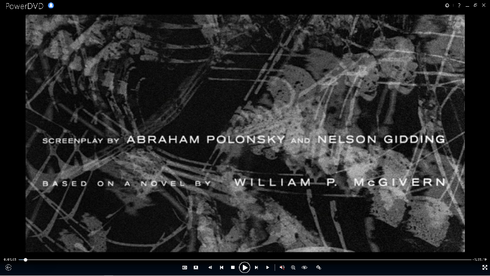 So credits on IMDb should always reflect the original release, so if John O. Killens was credited then the attribute should stay.

I've updated the credits to show as they do above.

The attribute should be on Polonksy's credit, not listed separately as it was never listed separately. There's a great unknown as I have no access to a pre-1997 version of the film. I have no idea how Killen's name appeared on screen. From what I read it was "John Killens" not "John O. Killens" but there is no way for me to confirm that.

I'm not sure that this will get any attention but John O. Killens credit is still there. That credit does not appear anywhere on screen. It would be illogical on the original print as his name was used for a blacklisted writer and as you can see above, it does appear in current prints either.

Also, the credits are still out of order. The screenplay credits are first and the based on a novel credit is second.

Thinking on this - I think we shouldn't edit or change anything until we have seen a pre-1997 copy of the film. Updating WGA credits on a title that we don't actually have the credits for isn't our policy. If you can track down the original credits I am happy to update.

At the very least, you need to remove the "firont for" credit as that would not ever have already as a credit. It would defeat the whole purpose of having a front.

Another note: We know that the credits as shown and provided by the WGA are not correct. They are out of order and there is no way that Polonsky was credited. This is indisputable history. Leaving Polonsky's credited as is will leave those that are unfamiliar with blacklisted writers with the impression Polosnky was never wronged. From DVDTalk: One important point concerning the screenplay: Odds Against Tomorrow was written by Abraham Polonsky and Nelson Gidding. Polonsky was blacklisted at the time, and originally received no screen credit. (His work was credited to a front, John O. Killens). As with the DVD of Bridge on the River Kwai and possibly others, this version has "restored" Polonsky's name.The decision to do this was, presumably, made at the behest of the Writers Guild of America (WGA), but whoever is responsible, such re-writing of movie history is, in this reviewer's opinion, a well-intentioned but singularly inappropriate response. It would be completely understandable before the picture to include a card stating something along the lines of, "Abraham Polonsky co-wrote Odds Against Tomorrow, but was blacklisted and credited here as John O. Killens." But to simply insert Polonsky's name into the credits without explanation is, really, an injustice to blacklist victims in general and Polonsky in particular. Presenting the film in this manner is to suggest, particularly for audiences unaware of the blacklist, that Polonsky was never wronged, that his name had always appeared on the picture as it is now. Also, I don't know where anyone would find a print of the film before this change was made. The first DVD release, by MGM, was in 2003. The Criterion release was later. The VHS was also released in 1996 which probably contains the "corrected" writing credits. (I was wrong about the year when they were restored. It was 1996).