No button to rate a show

The TV series Life's Rewards (TV Series 2021– ) - IMDb lacks the usual button to rate the series.  It appears to have completed it's first season.

There are no scheduled airings for this title

No Ratings Available
Ratings are not available for this title.

Needs a release date to Rate the series and add Reviews

IMDb Users
9 IMDb users have given a weighted average vote of 3.7 / 10

Hi, ACT_1.  When would release dates show up?  I've watched it on Amazon Video recently (well, 3 episodes, couldn't stand any more.)  I'm not sure how one would derive dates from its presence there, though.

I Looked at an  Episode and there are Dates, Rates, Reviews...

My guess: assign a release date to the pilot, which is the "first" episode, and the series will have one too. 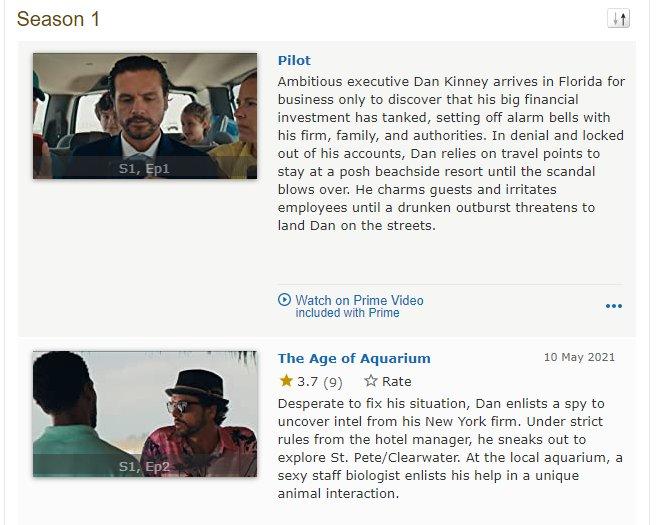 Thanks, bderoes.  I've just entered that... only 10,000 items in the processing queue.  I'll check back in a couple of days.

@ACT_1 , yes, I see that for every episode besides the pilot.  I was trying to rate it at the series level.  I took bderoes' advice and submitted the date for the pilot, which may fix it for the pilot and for the series.

@nick_burfle Why were you trying to rate a series of which you've only seen 3 out of 8 episodes? Why don't you just rate the 3 episodes you've seen? Would you rate a 2 hour movie if you'd have only seen the first 50 minutes?

I almost never rate individual tv episodes, maybe absolutely never, I don't remember doing it.  But the only time I rate a series without seeing them all is if the ones I watch are so bad I can't bear to continue.  I'm pretty tolerant of crap, so giving up early is a rare event.  After three episodes of this series, I have zero expectation that future brilliance would change my mind.  So, in my opinion, rating now is valid.

The answer to the 3rd question is, it depends.  I routinely watch mediocre films to the end, to give them a chance, and also for incomprehensible films.  As you imply, I agree it wouldn't be fair to most films to do otherwise.  But on the rare occasion that it's so noxiously bad that I decide to stop watching after watching for more than a short while, it should, I think, be rated accordingly.  And I do.  I'm not going to argue about it.

@nick_burfle Thanks for your reply. I see your point when you say "After three episodes of this series, I have zero expectation that future brilliance would change my mind." I just fail to see how you can know that a series is than worth a, let's say, 3 instead of a 4 or a 2. It won't become a 6 or higher for you, that's for sure, but how can you be sure of the specific vote you're giving? And especially given the fact it's possible to rate individual episodes, I don't see why you'd rate a series as a whole if you've only seen 3 out of 8 episodes.

But as I said, thanks for your reply and I guess the expression agree to disagree is applicable here. :)

I can confirm that the TV Series title can not be rated.

@nick_burfle She most likely just made a typo and intended to say "can be rated" because it was ratable at that time already.

She most likely just made a typo and intended to say "can be rated" because it was ratable at that time already.