When submitting a Movie Connection, if one just enters a title as the "other" film to be connected, one will get a list of choices with similar titles. Unfortunately, the choices given for the Other Title are not well selected.

For example, suppose there is a reference to the last James Bond film, ﻿Spectre﻿. Entering that title will produce the following result: 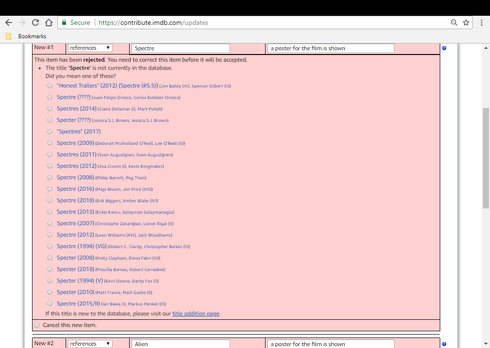 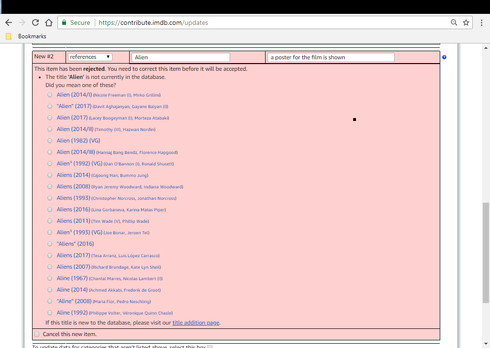 Notice that some films tited ﻿Aline﻿ are listed, but not the Ridley Scott film which has over 668,000 votes on IMDb.

Now, I do know how to work around this problem, either by entering the full title including a year and roman numeral if applicable, or by entering a title constant. But that's not the point. I would think that if the software is going to give users choices of similar titles, it should prioritize the titles that users are most likely to be searching for. If people are looking for ﻿Spectre ﻿or ﻿Alien﻿, surely the film starring Daniel Craig or Sigourney Weaver should at least be among the ﻿top 20﻿ choices offered by the software, if not the first choice.

I'm glad you said something. I just opened another tab and searched separately.

When I add connections, I usually have a bunch for one film, and hate the lengthy check and recheck process, and also sometimes didn't find my choice. I don't understand why IMDb doesn't incorporate the "add title" logic from list editing instead of this system, just as they've done for adding cast/crew to a title. At least we'd get consistent results across the features. Then again, that feature doesn't find shorts or TV episodes... unless they added it recently. (I have been getting shorts sometimes in the main search box.)

Thanks for the feedback.  We aware of this weakness and there is a ticket open to address it in the longer term.

I realize that this ticket is still pending, but I just wanted to cite another example. I wanted to add a reference to "Happy Days" (1974) starring Ron Howard and Henry Winkler. 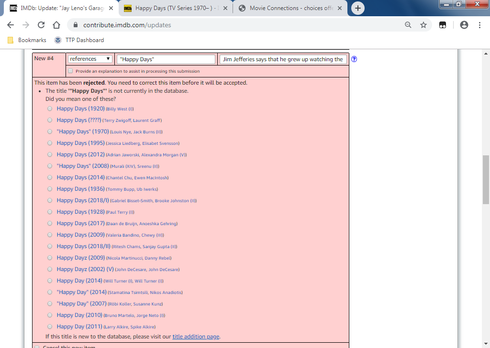 Notice that "Happy Days" (1974), a TV series with over 14,000 votes, which ran for over 10 years and aired 255 episodes, currently ranked at 2,131 on the MovieMeter, does not make the top 20 choices.On the other hand, "Happy Days" (1970), a variety show about the music of the 1930s hosted by Louis Nye, which ran for less than three months in 1970 and aired only 10 episodes, with 21 votes and ranked at 443,02 on the MovieMeter, was the third-listed choice.Where titles are identical except for year, I think you could prioritize the titles just by votes or MovieMeter and get better lists for this situation than what the software is generating now.

For the most part, I've given up on trying to get the system to pick up the name. I just google it in another tab and add the tt number.

There is almost no point in trying the embedded search unless you no the year. (Like, I will submit Casablanca (1942) because I know it exists); otherwise, the search is terrible. You are much better off opening a new tab, using google to search for the title on imdb and then pasting the tt number in the field.

I sure hope after two years, IMDb has some sort of update on this matter...