Longterm question: Who enters most of the data on site?

As a fairly casual occasional amateur contributor, I’ve always wondered about how data on site gets added en masse day-in and day-out, and who adds most of it? So I thought I'd finally ask... 1. How are new releases and ones in production submitted to the site to be so up to date? Are there staff paid at production companies/studios/broadcasters or somewhere else entering it all, or is it mostly just committed amateur enthusiasts? Given the level of detail, it takes a heck of long time to enter, check-through, and add additional facts later as they occur. So I can't believe it’s just (even the most committed of) amateurs doing all this in their spare time. The shear daily/weekly volume itself is immense when you consider the amount of content being made around the world (literally thousands of titles/names every week!), hence even a team of amateurs would surely be overwhelmed...? Sure, I get there are paid staffers at IMDb that check the actual contributions, but the actual initial data-entry itself: who does the bulk of it? 2. re. awards & film festival screenings. Given there is a regular set of festivals and awards that happen every year on a schedule, is there a regular person or group that tracks them each year and makes sure they’re all submitted? I wondered, as a couple of times I've found myself adding festival screenings to titles for quite big festivals (eg. TIFF: Toronto International Film Festival) that were completely missing from site. 3. Is there anywhere on site that mentions anything about how data is added (outside of the obvious 'how to’ Help section)? I'm sure a lot of general users would love to know how data appears and is maintained, outside of the (very committed) amateurs that may do so. Thanks! :-)

Are you perhaps seeking a breakdown of new title additions according to these sources? 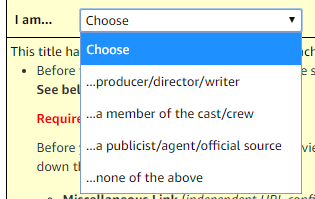 Unfortunately all we can say about this is covered by the help page included above.