One of my colleagues was able to get Quick Fit With Cassy from PBS Wisconsin approved as a TV show, but I am unable to add episodes due to "Lack of supporting evidence." I provided "Miscellaneous Links" to episodes on YouTube, the national pbs.org website, our host's LinkedIn profile. I don't know how else to prove that this show exists. Please advise what additional evidence I can provide.

In order to have a new title approved, you will have to provide further online sources to help us verify the title/episodes eligibility. Some examples include trailers or behind the scenes video, production stills such as behind the scenes footage or pictures, mentions from reputable sources, amongst others. Once these are resubmitted, our editors will review the information.

For more detailed information, I encourage you to review the following additional title evidence Help Guide and this other guideline.

Let us know if you have any further questions/issues!

The issue is that every episode I have submitted has been rejected due to lack of supporting evidence. 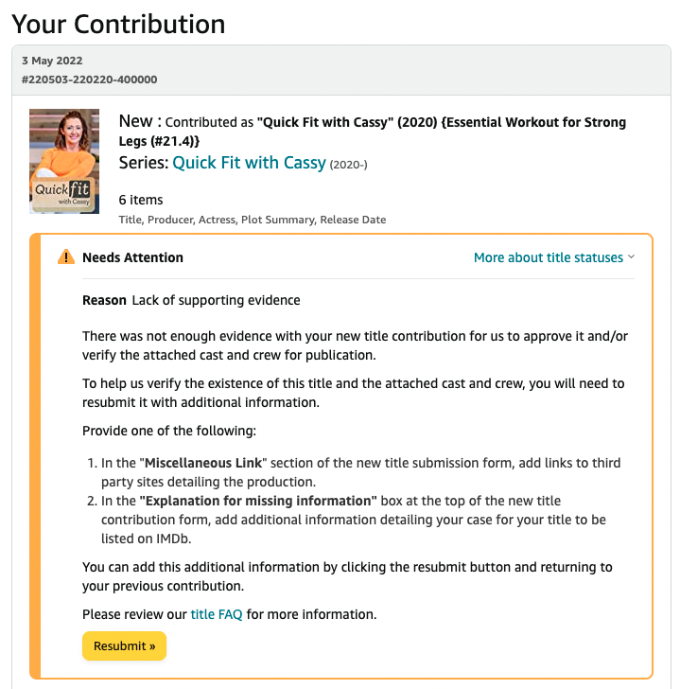 @tlovdahl​ I think the issue here might be adding a season 21 to a series that started in 2020. I would be confused too if I saw that if I were the editor. Checking PBS site, they really have 22 seasons, apparently 8-10 episodes are released and then a short break like a month and then a new season. So in this release scheme it makes sense. Did you start adding episodes from season 1 or did you start adding them from last season? I think adding them from season 1 might have prevented the confusion.

Also I was gonna try to add at least season 1 but I think PBS's site has an error with season 1 listing, they are listing it in reverse order looking at release dates, right? According to the release dates "Relieve Hand Pain and Tone Your Arms" should be the first episode and "Stretches for Sitting too Long" should be the last episode of the season, right? Can you confirm? I didn't see such an error in other season listings on the PBS site, only first season appears to have it.

Tara and Maya: Maybe I'm missing something here, but you don't usually need supporting evidence to prove an episode of a TV series that is already listed in the database.

Tara, can you please explain what you are submitting? You should be starting from the series page at https://www.imdb.com/title/tt17633884/ and then clicking "Add episode" at the bottom of the page to enter each episode.

For each episode, you will need to identify it by providing at least one of the following pieces of information (preferably more than one of them):

Tara: While the idea that a show that debuted in 2020 would be in its 21st season is unusual, it's not completely unprecedented on IMDb. (Compare "House Hunters International" (2006), which is apparently in its 175th season.)

Since there are no episodes of "Quick Fit with Cassy" listed in the database at all yet, I suggest starting by submitting episode 1.1, then 1.2, etc. Let us know if you have trouble getting episode #1.1 listed. There shouldn't be any need for supporting evidence at least with the low-numbered seasons and episodes.