Is it possible that IMDB have made the 'known for' selections ridiculous to try to stimulate IMDB Pro signings and increase revenue? My 'known for's' were sensible for years but have now become ridiculous and don't demonstrate any intelligent algorithm, but the only way I can change them is to pay a lot of money for that single simple possibility to change them to something sensible.

Known For credits are calculated as described on https://help.imdb.com/article/imdb/discover-watch/known-for-title-selection/GNL2E4LJVKM9QLMD

The original "known for" system was designed in 2001 before IMDb included episodic credits and before certain other changes were made to the IMDb data model. In December 2017 we switched to a new system which takes all credits into account and better handles episodic TV.    While no system can be perfect,  we are pleased with the overall improved quality of the selections.  We are sorry to hear your default selection has worsened -- if you provide details of your page and what you would prefer to see selected, we can feed this into future updates to the algorithm.

If you search Get Satisfaction, you will see hardly any comments on the change (and customers are vocal with complaints) so we believe our assessment of the success matches prevailing customer opinion.

Yes, well, here's a customer comment for you. Anytime Denver Pyle is not "Known For" being Uncle Jesse on The Dukes of Hazzard, you can be quite sure whatever algorithm you're using is definitely flawed.

I just want to join all the annoyed people of the "known for" section and just to add my example, I have edited a FEATURE FILM that was theatrically released in Greece in 2016, I have also edited a short film that won the GOLDEN PALM in Cannes in 2019 yet the IMDB algorithm suggests that I am known for a short student film I made in 2009 and a home movie that none has ever seen from 2004.  It's just a ridiculous algorithm and it's a shame to ask people for money to let them change their result. But the most annoying part is that even if you do pay for a month, when you stop paying it goes back to the way it was. Find a way to fix this please, it's insulting to a lot of industry professionals.

Yeah, my 'known for' titles were also screwed up in December. The titles IMDB picked were so obscure and ancient that I felt compelled to start an account to change them back to the old/proper titles. Now that I'm canceling my membership, an email tells me those 'known for' titles are going to revert back to the obscure titles that are measurably less popular than my other work. It seems like a grift.

Well of course I can only submit my own personal experience and as far as I am concerned the selections for 'known for' have been fine for years, and are now ridiculous, and have nothing to do with the popularity of a film, whereas they clearly did before, they just seemed to be selected at random. (I've temporarily corrected them by joining IMDB Pro, but was disappointed to see Jason say they revert back to obscure titles if you cancel.)
I would be happy to pay something for the abilty to select 'known for' myself, but full IMDB Pro membership is too expensive for this one facility, and unfair.
Could IMDB make a less expensive form of membership, for this one ability available?

I agree it's to get us to pay

Col Needham: "Known For credits are calculated as described on https://help.imdb.com/article/imdb/discover-watch/known-for-title-selection/GNL2E4LJVKM9QLMD";The truth is that in many cases this "algorithm" seems to either be broken or purposefully adjusted to not work, and force people into buying an expensive membership.For example, a bafta nominated feature film which I supervised is not in the top 4, even having the widest reach and distribution. So, either there's a bug which I'd like to report to your engineers, or imdb is not being transparent on how the algorythm works (I've looked at the link above)I'd seriously like to report this as a potential bug in your systems, but all customer services just point to the link and not wish to look at the underlying issue.I look forward to your reply

Just make it free to change it to what we want, its that simple. We know what we're known for, and we're certainly not known for our student films. And Film having more weight than TV? Directors more than Actors? That is simply stupid. It's called "Known For", not "Emphasized based on arbitrary attributes". Fix please!!

Yeah, but a person does not have to have a car, whereas an IMDb name page as long as it is not empty will be had even if unwanted.

Vanity aside it's also wrong, like a car with no wheel fo example.

They picked the least known and oldest credits for my "known for."  I'm an Emmy winning cinematographer, shooting for 20 years, was an AC for 6 before that, have worked on many broadcast series and films that have gone to festivals etc and yet STILL they show nothing but 4 unreleased films, and 3 out of 4 of the films are from when I was an AC.  How can I be "known" for films no one has ever seen.  IMDB: is it true your "algorithm" is leaning on us to make us pay, or make us look like chumps?  It almost seems a sort of reverse "Who's Who" scam, where if you don't pay, you are punished with obscurity.

Yes exactly that, which your post puts very succinctly, my experience was very similar. An algorithm designed to make us pay......?

Hi Ed, well thanks for writing in.  Care to share what your agenda is here?  Are you a filmmaker?  An employee of IMDB,  Amazon, or any of its subsidiaries?

The film won a News and Documentary Emmy.   I produced and shot all the footage done  in the USA.  I worked quite hard on the film including at times putting up my own money in order to get it done. So I shared in the Emmy award with the other producers.  PBS did a wonderful website and the film aired on Independent Lens and was seen by a great number of people.

Maybe it makes sense to you that a week long stint as 2nd AC on an almost entirely unknown film, an unreleased feature film as 1st AC, and two 10-minutes long shorts that screened in a few tiny festivals for a few dozen people outweighs projects  that were seen by millions.  But to my mind, you haven't made that case successfully.

A Lion's Trail is listed under 2006 but the competition year I believe was 2005.  Here I am onstage with Director Francois Verster , Dan Javits and Mark Kaplan at the Emmys in New York in 2006.  My "unpopular" documentary series Moving Upstream garnered up to 2.5 Million views per episode.  So now maybe you can  explain  why the four  "known  for" slots are occupied by two  unreleased feature films and two short films that have not garnered any awards or been shown outside of small regional festivals? 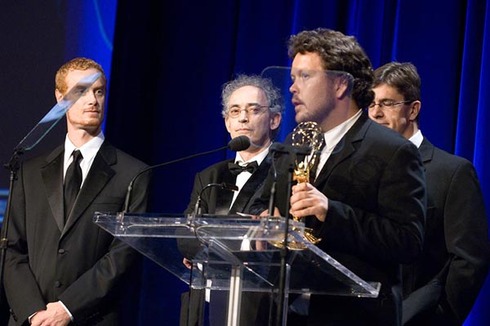 ("Fall" possibly had some sort of release but I've never seen any evidence of it).   And I worked  on it for  maybe  a week as a camera assistant.  So tell me how  this makes sense?