There's only 1 country of prodution listed on this cartoon's ( https://www.imdb.com/title/tt2217971/ )credits on the 2012 DVD: Russia. However, IMDb lists country of production as 'UK'. The film was release in Russian cinemas on March 15, 2012.  On the 2012 dvd for this cartoon, the only country credited is Russia (see https://www.golddisk.ru/goods/49385.html or https://www.golddisk.ru/goods/47559.html). Also the country of production is listed as "Russia" in kinoglaz.fr movie database, that specializes in Russian cinema: http://www.kinoglaz.fr/u_fiche_film.php?num=7926 The film had 2 DVD releases: one in 2010 which was first released in Chezh repuglic (video of this version here: https://www.youtube.com/watch?v=d9Rq5Ljzz1c, ) and then again in 2012 in Russia (video of this version here: https://www.youtube.com/watch?v=uPW7BCv7g7g , same cartoon but intro and end credits are drawn differently)However my submission from a few months ago #190414-083422-533000  got rejected by staff, saying "Unable to verify" even though I provided the link to a DVD store where country is listed as "Russia" for this film's DVDCan someone just re-visit the original submission #190414-083422-533000 and approve it? Thank you!!!

There are currently two companies listed for the film, one British and one Ukrainian. Your first YouTube link, which you say is the earlier release, names Yalta Film, also Ukrainian. It seems hard to prove that it was actually a Russian production.

IMDb guideline:
"IMDb defines the country of a title as the place or places where the production companies for that title are based, and therefore where the financing originated."
https://help.imdb.com/article/contrib...

Hi Peter, unfortunately I don't think it's as easy as "this movie has 2 countries of productions" Ukraine/UK". The reason I think this a more nuanced situation:* Since, as you've rightly pointed out, according to IMDb guidelines "IMDb defines the country of a title as the place or places where the production companies for that title are based, and therefore where the financing originated." , then the 2 versions of the movie released in 2010 and in 2012 give conflicting evince:* version from 2010  https://www.youtube.com/watch?v=d9Rq5Ljzz1c  => it says @1:13:26 that companies are: Yalta Film / yaltafilm.ua (Ukraine) and Crombie film / crombiefilm.com (UK). Original audio is in Russian, dubbbed by Yuriy Kovalenko, Viktor Andriyenko, Oleksandr Ignatysha, Vlad Zadniprovskyi etc.) 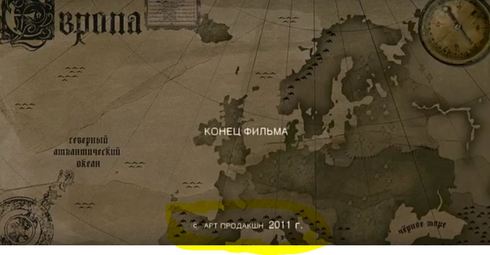 Cartoon itself is exactly the same => only differences:* different style of animation for intro and end credtis* Englsh credits in 2010 version and Russian credits in 2012 version* Audio is in Russian in both version, but it's done by completely different actors

Peter is correct, the production country should reference where the production companies for that title are based, and therefore where the financing originated. If you are aware that our information on the title is incorrect, then please feel free to submit a deletion for this and a comment with any sources validating your claims and our data editors will take a look.

Hi Will, will do. Per 2012 version end credits, the only production-company is "Art production" (Russia), therefore I'll re-submit with updating country of production to "Russia" and adding references to appropriate end credits that verify this.

Since that is not the original version of the film, the company's credit probably shouldn't be listed as a production company, and then it's questionable whether the country should be listed.

Also, if the only credit is after the copyright symbol, it may not be evidence of the production company. IMDb has a separate listing for copyright holders, and its guidelines say, "Not to be confused with the studio or distribution company, this information is usually found at the very end of the film's credits."
https://help.imdb.com/article/contrib...

The Good Soldier Shweik was initially produced in 2009 (UK, Ukraine) and released in 2010, the latter stated correct on its IMDb page. Later the Ukrainian side together with Russians co-produced the alternate version (released in 2012) having not only another sound but also another video sequence, which is shorter in time not because of possible PAL vs. NTSC difference but as the result of video edition and redrawings.All this is obvious when comparing the above provided links for youtube versions. The only tricky thing that may mislead in understanding is that the poster on the title page is wrong placed from the alternate version to represent the original version. Unfortunately, I see no original poster added (if any exists), so it's a reason for the wrong but better placement.

Then we should list like production companies for the original version, any later production countries involved solely for the re-release shouldn't be included.