There seems to be no way to convince the mods that in 1995 (the same year as Se7en) Gwyneth Paltrow did NOT appear in John Singleton’s Higher Learning as “Student (uncredited).”

There’s no evidence anywhere that she’s in it (I’ve seen it twice), and for a decade after its release the full credits did not include her.

Sometime between Nov. 2004 and Nov. 2007, she was added to the cast, alongside characters like “Frat Boy (uncredited)” and “Sleeping Student In Classroom (uncredited).“ I presume that an IMDb user with face-blindness watched the film, mistook a random blonde for Paltrow and added her to the cast. It seems no evidence was required. Maybe Brie Larson was in The Dark Knight Rises as “Gotham City Woman (uncredited)” and we won’t discover that until 2024?

“But maybe she took background work when she was a struggling actress?” Look at her early filmography and it’s clear that the answer is no. She was never struggling. 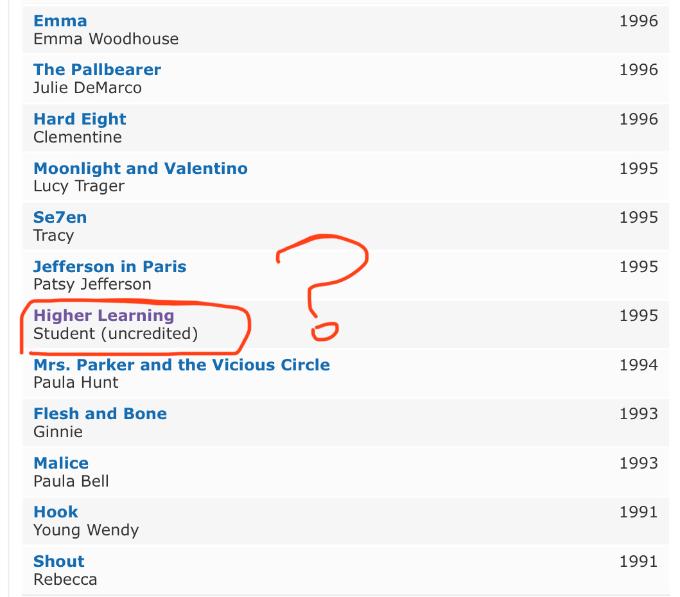 In 1991 she appeared as young Wendy in (her godfather) Steven Spielberg’s Hook. (All of her early roles were named and credited. Her only uncredited role is in Dogma, released after she’d won the Oscar.) For 1993’s Flesh & Bone, the prestigious National Society of Film Critics Awards nominated her for their best supporting actress award. By 1994 she was auditioning for the female lead in Legends of the Fall and dating superstar Brad Pitt. The next year she would become famous herself.

It makes no sense that during this period of rising stardom she’d work as an extra.

There’s even a Trivia entry confirming her non-involvement.

So, instead of starring in the film, she agreed to play “Student (uncredited)”? And for 10 years or more, no one knew about it? No. Please delete this obvious error.

For example, how are two people tagged on the Smile poster?

Look at 3-4 photos of Bacon. That’s obviously not her. Even IMDb says so. But “more evidence” was required. Declined.

I can confirm that the credit has since been removed.  Concerning the poster image you reported for "Smile" there is now only one name tagged.