I need help in correcting my listing.

I need help in correcting my listing. I'm David Frisch (III). In 2008, I played Prison Doctor in Death Race, directed by Paul W.S. Anderson. That credit doesn't appear on my page. At the same time, there is a David Frisch (VI) who is credited for stunt work on that film. I'm pretty sure this is an error. I'd like to have David Frisch (VI) deleted and my credit for the film added to my page.

Adrian, the main thing I want is the acting credit.  Also, I'd suggest removing the stunt credit and the listing for David Frisch (VI), because I think it's in error.  Of course, I can't be completely certain it's in error, but it'd be quite the coincidence if there was a stunt performer who has no other IMDB credits, and who just happened to work on the same movie.

Are you sure your role as "Prison Doctor" wouldn't have been considered a stunt role?

I just looked at the cast for Death Race and there is no David Frisch credited nor is there a character called "Prison Doctor". 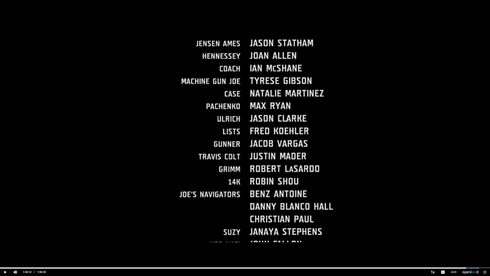 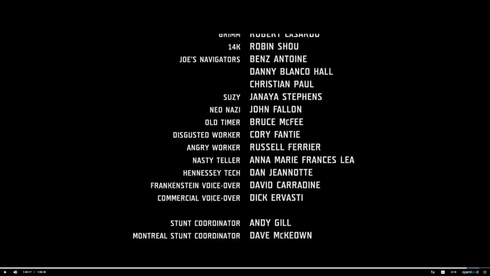 David Frisch is credited in the stunt category though. 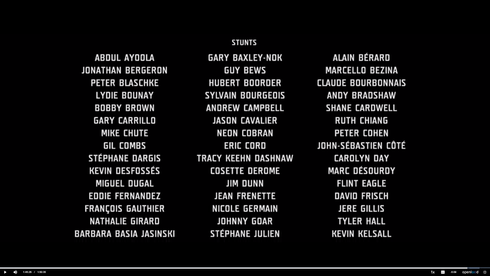 Generally, I would say you could add the credit with the attribute "uncredited" but seeing as it appears you are listed in the stunt section, I would think stunt performers are ineligible to be listed as cast.

Maybe, an IMDb employee can cast a light on this once they see these pictures.

Thanks for your leg work, Adrian.

For what it's worth, I had a day on-set in this film, as the doctor who does an intake on Jensen Ames (Jason Statham) when he first arrives ta the prison.  It included a bit of business involving giving him an inoculation.

My best guess is that an administrative error was made when they created the credits, since one could hardly call what I did "Stunt" work.

Okay. I moved the stunt listing to you. It should be on the site in a little while. We will see what an employee says about having you listed in the cast.

Thank you very much for your help, Adrian!

I have a feeling that in that case acting listing should be there too, just with an "(uncredited)" attribute.

If it’s the same scene we’re talking about, not fully sure that a person can get ”both” credits essentially for the same work. Obviously stunts often require also ”acting”, but they still belong to the stunt-section.


But, I’ll leave it to IMDb staff to figure it out.

Stuntmen often do have uncredited parts in the movies, which still should be listed in the cast.

I’m not against any credits. I was talking about the situation (scene) where the person is performing a stunt and is credited that way. Not sure that can he/she also get the acting credit from the same scene (that’s considered a stunt work).

I just checked the recent changes made and noted that your Stunt credit is now listed under your correct page "David Frisch (III)" here (thanks Adrian!).

Regarding the question about whether you are eligible for a cast credit, can you clarify if your Cast role as the "Doctor" was related to your credited role in Stunts?

Hi, Michelle.
Well, thanks to the glories of the internet, I was able to find the full movie on YouTube.

Apparently, my scenelet was mostly edited out; what's left is this:  At the 18:14 mark, we see a long shot of Jason Statham walking through a long wide room toward the camera.  In the background of the shot, a prison guard and a man in a white lab coat are seen.  I'm the guy in the lab coat.  The shot lasts about 10 seconds.

So, maybe this whole conversation is moot.  I don't know exactly what your criteria are, and frankly, it won't make that much difference to my career. (Though it still doesn't strike me as stunt work.)

Since you're the professional here, I leave it in your hands.  Thanks for your help.

I've become really interested in the situation and found that moment as well. You are clearly visible in the shot and the fact that you were credited in the stunts merits for a Crazy Credits entry, in addition to one this movie already has. Although probably even trivia entry, because I've never seen cases like that before.

That certainly counts: 10 seconds is not the least amount of screentime with which people were listed in Cast.

You look great in the shot, by the way.

Nikolay, are you saying that he should have actor, stunt, trivia and crazy credit entries for his 10 seconds role? I know you like to help, but let’s bring this issue back down to earth, shall we.

( On a related note, I just saw Spielberg’s ”The Post”. I noticed that maybe 15-20 people were credited as ”stunts” in the end credits. And I didn’t really see many scenes that would involve real ”stunt” work (a couple of scenes in the street, though). So not all of these credits are probably 100% accurate.

No, just two credits and one "fun stuff" (either trivia or crazy credit) item will do. Sorry, I tend to get overly excited about movie details like this.

As for "The Post" - that's interesting, but take into consideration that some of the most perfect stunts often go unnoticed. Something as simple as running down the stairs might be a highly choreographed stunt if director envisions it as such.

Yes, the point was (and this is speculation) that maybe mr. Frisch did something in that particular scene that was considered ”stunt” work by the production company and he was ultimately credited in that section. Based on this thread, his original scene probably got eventually edited.

Indeed, ”stunt” credits probably have a wider meaning in many films. It’s not just jumping out of buildings etc.

Thanks for the details. Unfortunately as you received credit in the stunt section of the end crdits then that credit is correctly assigned to that department on IMDb and you wouldn't also be eligible for an additional (uncredited) cast credit.

I hope this helps explain the situation.

Is there a reason why I don’t get any help with posting my new movie, trailer and poster to IMDb.
Regarding “9 Ball Director’s Cut “

I have seen stuntmen with uncredited parts, though, so I'm interested what constitutes for an uncredited part in such cases then? Asking to have a better understanding of the situation in case I'll encounter a similar one.

It is all dependent on the case. As a general rule if you are updating credits please refer to the position as it is listed in the end credits.

You may find point #6 on https://help.imdb.com/article/contribution/filmography-credits/i-worked-on-a-title-but-did-not-recei... useful:

Unless radically different, credited work on a movie supersedes similar uncredited work on the same movie. For example, if you were a stunt driver and a stunt rigger on a production and received on-screen credit (and are listed on our site) as "stunt performer", your existing credit already covers your work on the movie. There is no need to submit an uncredited stunt driver or stunt rigger entry. However if you are already credited as stunt performer but also worked, without receiving credit, as a cinematographer, then the latter credit may be submitted separately.

Sure, Will, that sounds reasonable.  I'm happy to have the credit on my page.