Fist of Fury (1972) is incorrectly titled The Chinese Connection

Does anyone know how to change the title of a film? The 1972 Bruce Lee movie Fist of Fury has been titled The Chinese Connection (https://www.imdb.com/title/tt0068767/?ref_=wl_li_tt). While it was officially released in the United States as The Chinese Connection, this was an accident on the distributor's part and all subsequent references to the film have been titled Fist of Fury. Also, there was a similar case where A Matter of Life and Death was titled Stairway to Heaven (the incorrect name used in the U.S.) and later corrected so I'm trying to do the same for this.

Hello Adam One,
They are correct in saying that A Matter of Life and Death (1946) was titled Stairway to Heaven in the US. That's the title it was initially released under. The American distributors claimed that no American audiences would want to go and see a film with "Death" in the title, despite Powell & Pressburger's objections. It has subsequently been released under its correct title of A Matter of Life and Death. (Like on the recent Criterion DVD & Blu-Ray)

Hi, Adam One. To make this right, you will want to submit an alteration to two of four alternate title items having its "Country/Language" designated as "(USA)":
The submission form should look something like the following image, before the "Submit these updates" button is clicked: 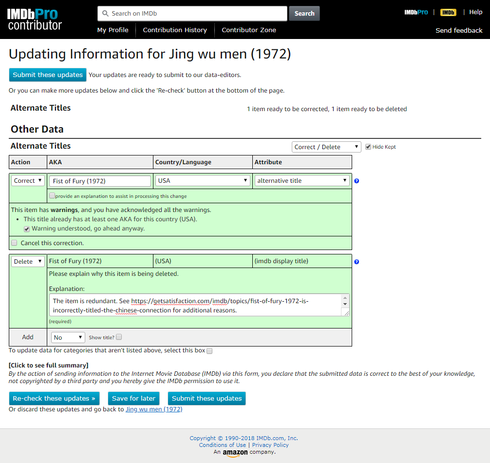 Steve, this is possible via the (imdb display title) attribute if you’re really sure it’s universally known in the US under the original UK title these days. The other AKA should remain nonetheless. See https://help.imdb.com/article/contrib...# but setting this on another US AKA will override the display back to the original title for US customers.

Steve Crook, you can change the parenthetical release year portion of an alternate title item to whatever number you want (as long as it is not lower than the earliest release year).

True Jeorj,
But then I would have to be sure exactly when they were shown under each title, and I'm not sure.

- If an alternate title is identical to its primary title (which simply means that the film had the same title in country X as in the original country) use the year of the primary title even if it is not the year the film was first shown in country X.
- Similarly, if there are identical alternate titles for the same primary title, use the earliest year among them for the whole bunch independent of the individual release dates in the different countries.
https://help.imdb.com/article/contrib...

I’m not sure the display title should be changed when the submission guide has this definition:

“The attribute "IMDb display title" refers to the title used by the filmmakers on promotional materials in that country at the point of release.”
https://help.imdb.com/article/contrib...

I've just been alerted to this after starting a topic about its 'sequel', 'New Fist of Fury'.

Coincidentally I just tried to change this via Title Correction.

'The Chinese Connection' was a title given by only the US distributors at the time, but the film's Hong Kong and export (not just UK) English title is 'Fist of Fury', and that is reflected on the majority of media.