First of all, sorry my poor english.
I have seen that some films appears with the status preproduction or postproduction in the web but in the app appears as status abandoned. (I upload images at last of the description).
In addiction i think that it could be a great idea if the "abandoned films" would appear in other site of the filmography of the actor/director... because i like to see a list of all "real films" and separatelly other list with cancelled/abandoned films.
For example a new section: actor, director, producer, composer, self, archive footage and ABANDONED FILMS (for example) 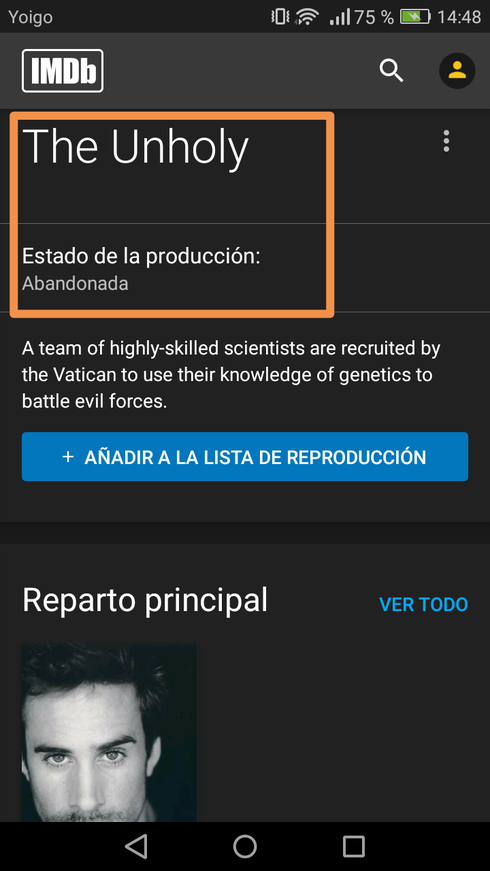 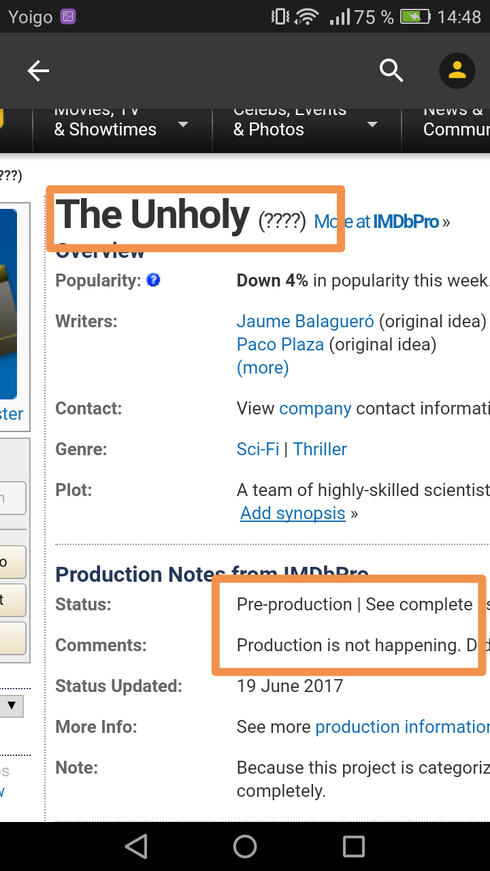 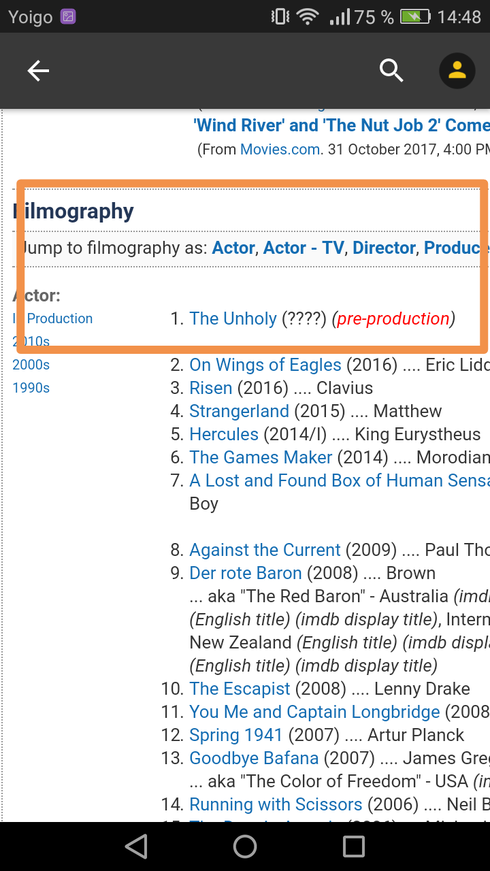 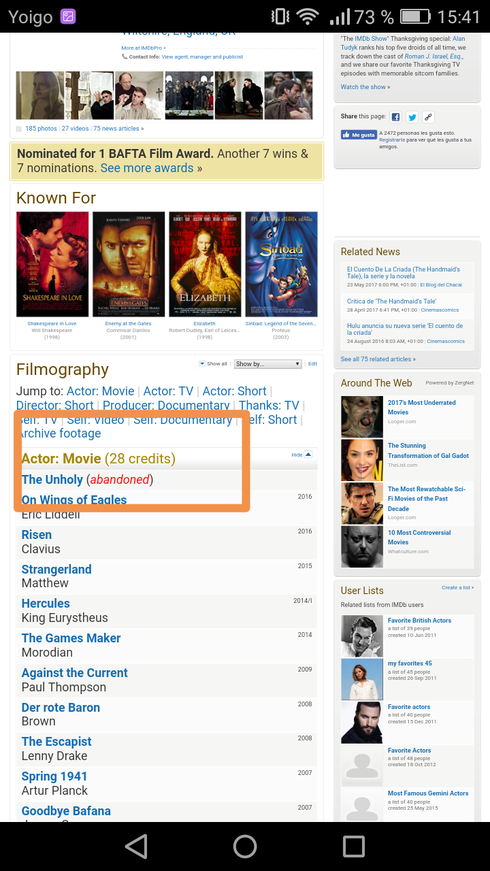 And some question related:


Can i submitted canceled films? I dont understand why the film of the example appears as abandonated but others films dissapear of the imdb profiles when the films are abandonated or cancelled.


For example i remember that many years ago Sharon Stone imdb profile appears with films announced or prepoduction as "in the lake" or "cougars". The films was cancelated and then they dissapear of the profile. Can i upload some cancelled films of years ago?

I remember that when i submited a new film i can not select the abandoned status. 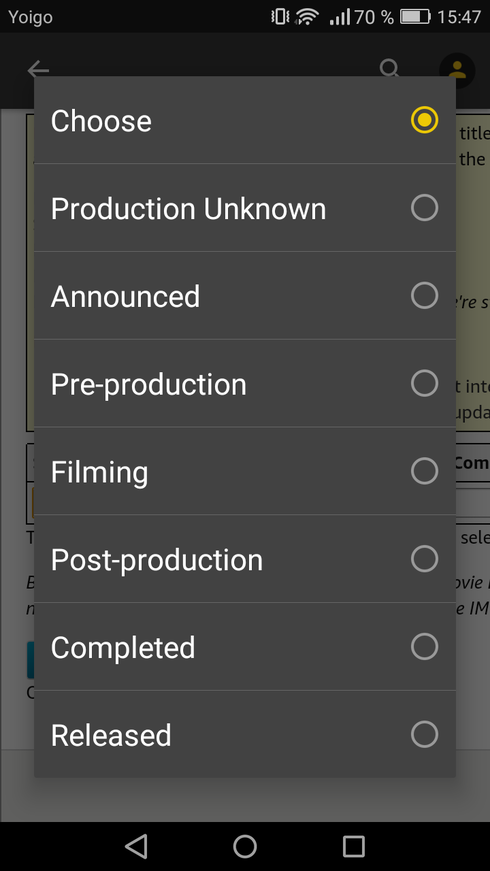 Why the "in the lake" dissapeared years ago of the actress profile and the film of joseph fiennes appears ? What is the difference?? 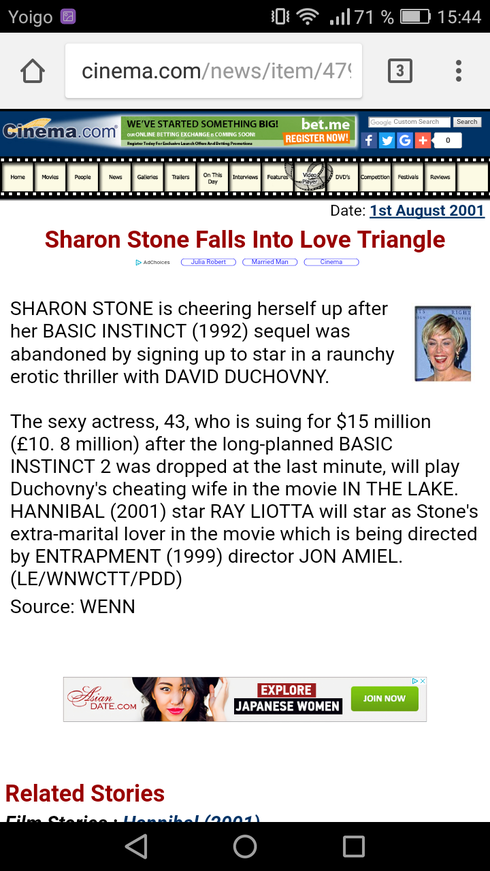 And, this is a personal request, can imdb say me in this thread all sharon stone films that have dissapear of her profile all the years (for example the cancelled films cougars, in the lake, gringa, the guest room, never change, crimes of opportunity, the liars club, stompanato, love hurts, dirty tricks, confederacy of dunces, attachment, satisfaction, waco, ...). Thanks a lot, it could be help me with my book.

If there is no help here on IMDB, and a comprehensive search of the internet doesn't yield results (Wikipedia, for example), consider finding out the agency that represents Ms. Stone and writing to them through the (paper) mail, asking for a comprehensive filmography. An IMDB PRO account will give you the name of almost every actor's representatives. Good luck.

By the way, I agree wholeheartedly that an "Abandoned" project would be a good item to add to the IMDB database.

Thank you for your message. This title page should have been removed from the site by our data editors when the abandoned production status was submitted to the title. I've now removed the title to align with our policies.