I often read plot summaries in awkward or incorrect English.  This is neither a complaint nor a criticism; I am aware that we have many contributors whose native language is not English, and any contribution, however imperfect, is better than none.  However, I often itch to correct these, particularly when, as in the case of the ARD plot summary for "Gefangen" I know the original language and can appreciate where the errors come from.  The aforementioned plot summary reads like a machine translation of the German-language plot summary of the movie.  I don't find any venue for submitting such corrections.  What is IMDB policy on this?

It is allowed to correct.

See the word "Edit" Start there. 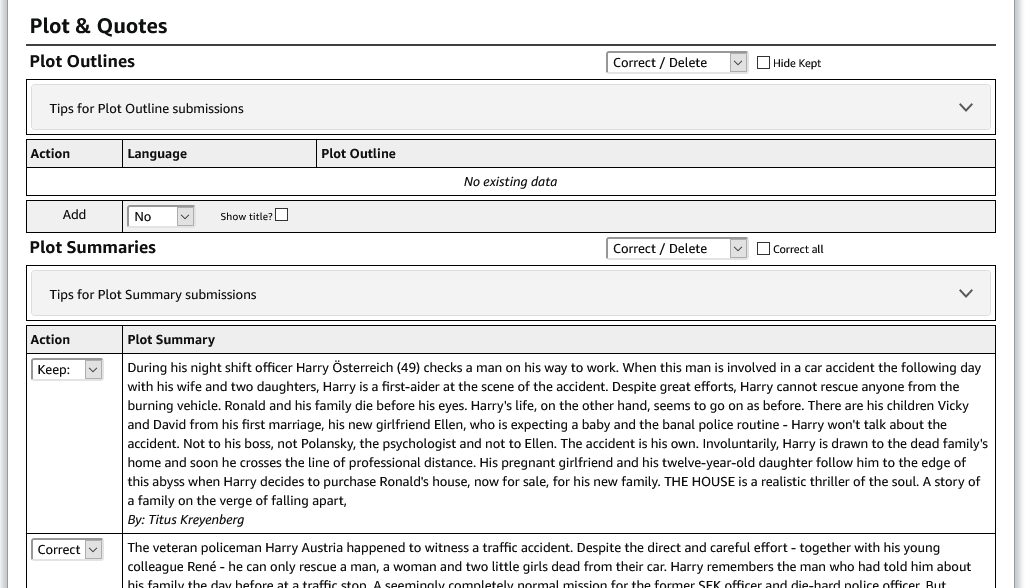 Do not edit these.

They contain too many plot points and spoilers. 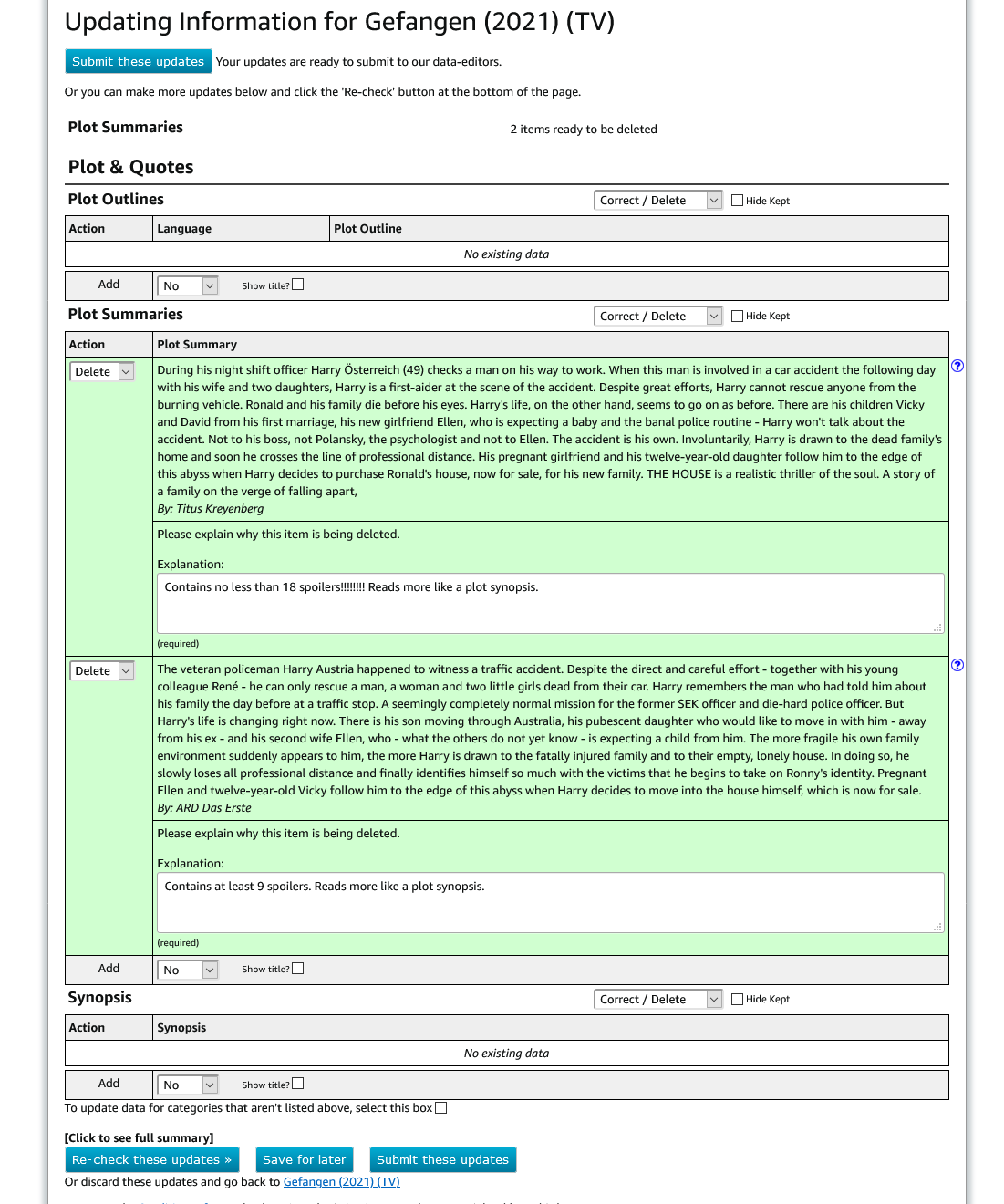 This will be at the top of the page.

A Law Enforcement officer happens upon a tragic traffic accident on his way to work. What he does not realize is the effect that it will have on him and his family in the near future.

I wont write one but follow the rules below.

Summaries should be more than 239 characters, but still reasonably brief. Aim for a paragraph or two. Shorter summaries may be re-routed to the outlines list.

Same here. Will not write one, but do follow the rules below

A synopsis should be a detailed description of the entire plot of the title, including spoilers, so users who haven't seen a movie or missed an episode of a TV series can read everything about the title. A synopsis must include exclusively details of the story of the film, with no commentary.

Thanks for all of the prompt and thorough feedback, Karen.  Unfortunately, the "Edit" function doesn't work for me.  I have tried it both on a PC in Firefox 87.0 under WIndows 10 Pro x64 20H2 and on an iPad Pro 2020 in Safari under iPadOS 14.4 and in both cases, selecting "Correct" from the dropdown list next to the summary does not switch the corresponding text box into edit mode as shown in your screenshots.  There are no error messages, but perhaps I don't have a high enough rating yet to edit anything.  If that is the case, it would help to have a message to that effect.

You have to select the "continue/check these updates" button at the bottom of the page after selecting the correct in the dropdown to get you to the page where you can make corrections. Then after making those corrections, you'll do it again. If you've done it correctly a submit these updates button will appear. So you select that to submit it for consideration to IMDb for approval.

You'll know your there when you see the byline box and the provide an explanation box. None of this has to do with any browser or how old your account is. 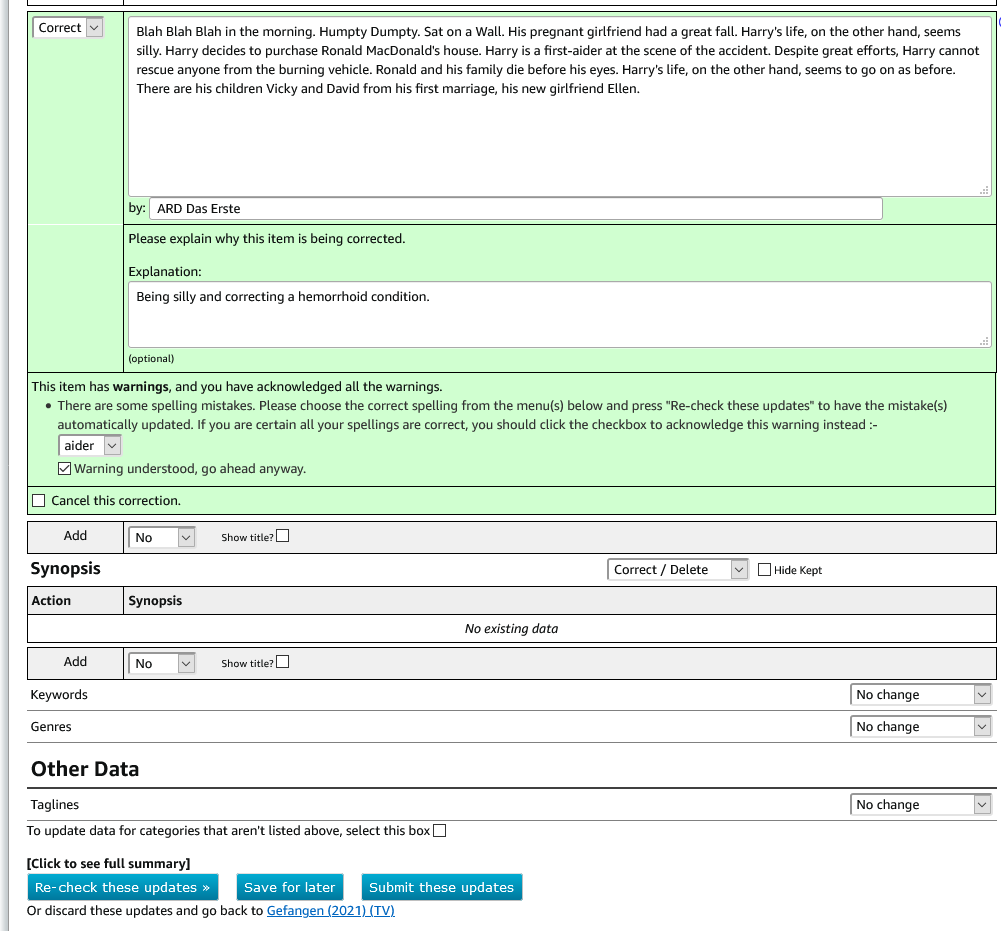 @Karen_P Thanks again for all your help!  I must have once done this correctly, but I don‘t edit frequently, and it didn‘t occur to me to use that button when there wern‘t yet any changes to check.  Is there a way to submit user interface (UI) change requests?   I am writing this in Safari on my iPad because I am also having problems with the sprnklr UI in Firefox under iPadOS: the search function doesn‘t work, clicking on my avatar doesn‘t bring up the context menu and I amunable to post anything.

As to the ARD Plot Summary for „Gefangen“, what do you suggest?

Should I rewrite it and post it as a synopsis, or should I just delete the spoilers in the course of my correction?

P.S. sprnklr is working again in FF on my iPad: I had to leave the site and call it up again and then everything was fine.

As to the ARD Plot Summary for „Gefangen“, what do you suggest?

Should I rewrite it and post it as a synopsis, or should I just delete the spoilers in the course of my correction?

As soon as the 2 summaries disappear, write your own brand new one. Those were poor templates anyway.

Presumably this means that you tried to delete the existing summaries around or before April 8th, but I still see them on April 14th, even though the „Data Processing Times“ page claims that all summary submissions up to April 10th have been processed.  IAC, I am tired of waiting and have simply submitted a new summary, as well as a Plot Outline, which I hope are in line with the guidelines.  Please let me know.

P.S. I am now thoroughly confused, as my submitted summary is invisible, even though the contribution has been acknowledged.  I understand that it has to be processed to be publicly visible, but, as the author, I would expect to see it when logged in, in case I want to edit it (which I do).  I also find it confusing that my submitted Plot Outline now appears on the Plot Summaries page, in addition to its regular position at the top of the main page, but it seems that this is SOP, according to @Peter_pbn's post here.

You can see the status of your submission through the Track Contribution feature in your update history. Once it is approved, it should appear on the summary page. You can't edit it until it is live on the page.

If you wish you can also correct the other summary you mentioned originally. As you say, Karen's request to delete it must have been declined. If a summary reveals too much about the plot, it is probably better to edit it a bit shorter than to delete it.

Based on @Peter_pbn's suggestion, I edited the two previous summaries and remove the spoilers.  I thought that my submissions had been rejected as duplicates, but apparently they *were* somehow submitted twice.  This has happened to me once before, with a goof I submitted on „The Meg“ starring Jason Statham.  Maybe Safari on my iPad isn‘t always updating the final submission screen correctly.

Everyone who has joined IMDB can make edits to practically everything apart from being able to add/edit people's profile images.

I rarely add or edit plots because I can't be bothered to think of the best way to sum a production up, but most of the time it's because I haven't seen the productions in question. The same goes for biographies.

However I've edited quite a few recently because they contained spelling mistakes, grammar mistakes, broken links they've attempted to add, and/or worst of all Americanisms on British subjects.

I unfollowed some of my old posts here tonight (and will be unfollowing many more old posts soon), one of which was by an American regarding a British actors biography.

He wanted to add two shows he claimed were bigger than the three shows mentioned in the "automatic biography" which isn't actually a biography. It's just IMDB picking three of their productions, based on various things to rank how popular or significant they are.

The two shows he claimed were bigger shows, definitely aren't bigger than the three picked automatically, and I should know, because I'm one of the few people today who actually pays attention to viewing figures. Those three shows get between 5 and 10 million viewers, whereas the shows he claimed were more popular got between 1 and 2.5 million viewers.

This is usually the case with non-Brits (usually Americans) and British shows.

They think they know what's popular in the UK, because they listen to the clueless critics, rather than the British public.

I occasionally recommend British dramas and comedies which average between 5 and 10 million viewers to American reactors on Youtube, but they ignore my recommendations (especially dramas) as usual, to watch shows which got between 1 and 4 million viewers, because that's what they incorrectly think is popular.

And then they sometimes wonder why they're not getting any viewers.

Back to the topic, so I checked his biography.

It seemed ok, as it contained most of his major roles, although it needed a few minor corrections. One of which was to remove a quote mentioning 1 of those 2 shows, which they claimed was "his breakthrough role."

He had already been in 100's of episodes of two of the biggest, and longest running shows on British TV, and then went on to play the lead in a critically acclaimed TV series, and was a household name to people who didn't even watch those shows, before appearing in that "popular" show with fewer viewers.

So I corrected the minor mistakes, corrected a couple of broken links, reworded some sentences, and added a few more recent films and TV shows to his biography.

I have similar problems with User Reviews, some of which are rife with usage errors.  However, it seems that they cannot be edited.

That is correct. Reviews are not editable except by the original author.