Do illustrators count as "writers"

I was watching Ferdinand and it has the following credits: 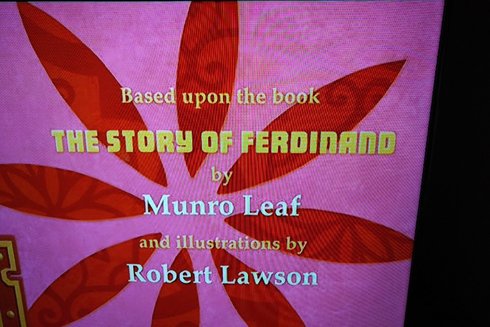 My question is should Robert Lawson be credited with a writing credit? I don't think so because even though his illustrations are a basis for the look & feel of the movie, he's not actually a writer. But, if he should be credited, how should that credit look?

Hi Adrian,
My feeling is that the same policy as the opera composers and lyricists should apply here. Unless mistaken, the lyricists are registered among the writers when the composer is in the music department (e.g. see Losey's Don Giovanni). I am not familiar enough to suggest a hosting department for illustrators... !

Illustrators doesn’t belong to Writer section. Usually this type of credit means that the characters (or maybe the whole visual design in some cases) are based on the original designs/illustrations/drawings/comics etc by some illustrator/artist. For example, some Moomin animated series and movies are based on the illustrations by Tove Jansson (she created all the characters and their design).

An illustrator is not the same as a writer. The sole author of a book that is comprised entirely of pictures and no words is the illustrator of that book rather than the writer of that book. If illustration work has been incorporated into a film adaptation of print material, then the illustrator's credit would go in the art department section.

Stan Lee is actually a comic book writer, not artist.

Todd McFarlane, on the other hand, is both comic book writer and comic book illustrator, yes? One of those comic book production moguls is a "polyart".

Many people in the industry are both: McFarlane, Kevin Eastman, Peter Laird, Frank Miller, Steve Ditko, Bob Kane... Miller is an odd combination: he became prominent as a writer but eventually also became a prolific artist.

If he is credited alongside the writer, I believe it should be the case.

Come to think of it, let us remember that the word "writer" is almost always used in place of the more appropriate word "storyteller". A storyteller can tell a story in any number of ways, including forming scripts of dialog and including forming pictures worth a thousand words.

If Robert Lawson worked together with Munro Leaf to create the actual story (the plot, whatever) found in the book from which the film was adapted, then he is a "writer" by show business's understanding of the term "writer".

I'll add that the terminology is somewhat different in the world of the print medium. The storyteller is known as the "author", and special credence is given to the editors, illustrators and compilers, while any scriveners, compositors or typists involved in the construction of the "prototype" or enhanced manuscript are not credited, as they're non-artistic "mere" assistants.

It works a bit differently with the child books more often then not: many writers work very closely with illustrators to ensure that it will be the best possible outcome and the latter often get the credit on the cover. It is not a world standard but is quite common in many countries, including United Kingdom, USA and Ukraine (all of the beginning with "U" not intended, it is also common in Sweden if you want a non-"U" country).

In this specific case, since the credit is for the published book, I would have submitted the credit this way:

Adding to what was already said if the movie was distinctively based on illustrations then it is considered source material and illustrator shold be listed as a writer. It is a common practice with comic books due to the fact that artists add a lot of additional aspects to what was written via visual side, but it also happens in other cases, the most odd and specific on my memory: Bedlam (1946) based on a painting by William Hogarth (which is, surprisingly enough, not the only case of his paintings adapted as movies).

Just to confirm, in this instance for the title "Ferdinand", the illustrations are a vital part of the book and as Robert Lawson received billing with Munro Leaf, this is an acceptable Writer credit.

Regarding whether illustrators should always be listed under the Writer section, however, is a bit trickier to determine.  The example mentioned earlier in the thread for comic books is very valid, as these are collaborative works and very often the illustrator has as much creative input (sometimes more) than the actual writer of the dialogue. In order to make a truly fair judgement, we would have to look at the creative process of the book and then decide.

Anyone who reads e.g. books, fairy tales, comics etc for their children would say that illustrations/pictures are a vital part of the book. They are. And they should be. But I believe that’s not the real point here.


When it comes to credits and IMDb, to me it’s pretty clear that there are two different credits here:

2) Based upon illustrations by (in this case probably Art Direction, in some other cases perhaps Animation department)


The book was written by Leaf. He’s the credited author in the original book and in the film. I’m sure Lawson contributed greatly by creating the visual world, characters design and other ideas, but he didn’t get the Writing credit for the book (to my understanding at least), nor the film (as we can see from the screenshot). At the end of the day that’s the main point, isn’t it?


Artists/illustrators/animators etc create visual worlds, design characters etc, but writers create the story, dialogue, the screenplay. They actually write the book, page by page. We still need to see the difference, whether we like it or not. Artists/illustrators usually (of course: not always) receive a ”story” or ”screenplay” credit when it’s appropriate. It’s not really up to us to make that decision here on IMDb.

Thanks, Eboy. That's what I've been trying to explain.

I can see it can be read as separate credits like that (since it says “based upon the book X by ... and illustrations by ...”), although it makes it sound like the illustrations could be from anywhere and not necessarily from the book.

I think “Art Direction” is wrong. Most illustrator credits are in the art department, though there are some in animation and others in writers already.

I just want to add that my point isn’t to say that ”Writers” are more important that ”Illustrators”, since these (type of) arguments almost sidetracks the discussion. I also fully agree with e.g. Nikolay when he said that many writers work very closely with illustrators in the world of children’s book. It’s pretty evident in the publishing business.

The point here is whether some person is credited or not, how they’re credited and to which department. To me that’s relatively obvious based on the screenshot - and the fact that the original children’s book is credited in similar fashion (I guess the cover says ”Drawings” originally, maybe ”Illustrator” in some editions).

This is also a pretty good point about Robert Lawson - he did both, but not always (from Wiki):
”In total, he illustrated as many as forty books by other authors and another seventeen books that he himself was the author of.”

The matter is not quite about "writers" and "illustrators" so much as it is about "writing" and "illustrating". The phrase "written by" just about automatically means "authored by" (often shortened to just "by") even if that is not the case, whereas "illustrated by" may or may not imply "authored by". It is not always easy to pin down who exactly is responsible for recounting/designing the progression of events along with the elements (objects or people) causing or being affected by those events, when using words like these.

The words "write" and "illustrate" could potentially be interchangeable, perhaps should be, but they are not necessarily so. The editors and publishers avoid using the word "illustrate" in conjunction with a person's name to describe the product of said person who has not drawn, doodled, sketched or so any part of said product. It is as though editors and publishers regard an "illustration" as a special kind of "writing". Even so, it is never immediately clear that phrase "illustrations by" implies "plot by" or "story by" or just generally "by", unless all credit for a book is attributed to exactly one individual, in which case only preposition "by" is usually used. Often the illustration credit in a book reflects work merely done at the behest of the author, and rarely does a writing credit in a book reflect work done merely at the behest of the author, all because the word "writing" connotes storytelling.

For our purposes, since we are dealing with things in the perspective of movie creation, we can just about consider everybody with any major original credit (perhaps to the exclusion of "thanks" credits) in a book from which a movie is entirely adapted as having "written" the book, as long as those names transition to the screen. This is, of course, contrary to what I expressed earlier, when bringing up the art department of a movie. I'm bouncing around partly because of semantic nuances.

If we are talking about Ferdinand (2017), does this film not have WGA certified credits?

What I mean is that there may be a WGA record available which IMDb may be able to access to help determine if the illustrator credit should be considered a writing credit.