Directors of Photography — are they really less important than writers?

something has bugged me for years.

As an actor, I know that movie-goers are always keen to know who "the stars" are — so it makes sense that a handful of them always make it onto the top of the main page for any film.  And, of course, more discerning movie-goers (and finaciers) love to know who the director is.  So they get top IMDB billing too.  And then, of course, we couldn't do it without the writers — who, I suppose, deserve a good deal of credit for the intellectual inspiration for any film.

Cinema is a visual art.  Since the earliest days of film, the people who tell the story are the people who assemble the shots. No doubt the editor (more often than not, under directorial supervision) is key to this process.  But editors could not possibly assemble shots if they had not, in the first place been planned, lit and filmed by a visionary cinematographer — or Director of Photography.

Like the rest of the unit, these work under supervision of the director — but here's the thing:  if, under inspired direction, a "star" should happen to give the performance of his/her little life, it will still go entirely unnoticed without the craft of a great photographer to catch it, light it, frame it, and DWELL on it — not just missed by the editor but, ultimately, by the audience — and the film WILL FAIL.

So can someone please explain to me: why, on IMDB, does a DoP not get second billing — right under the name of the director?

In my opinion (as an actor and would-be "star"), the cinematographer is second ONLY to the director in ensuring, through their craft, the ultimate success and endurance of any film.

Of course, without a great producer, capable of raising finance, many great films never get shot.  But the SHOTS depend on the DoP.

Can we not offer cinematographers a prime spot on the front page of any IMDB listing?

Hi, Eric. Welcome to the IMDb Community forum! Are cinematographers really less important than writers? Who knows? One issue is that when a director of photography apart from the director of acts/scenes is replaced during the middle of shooting stage of production, audiences tend not to notice. Another issue is that not all movies belong to the same production paradigm, as for instance, some movies are predicated upon the recruitment of actors or puppeteers, like a stage play, whereas other movies are predicated upon the recruitment of animators, meaning no cinematographer and no director apart from somebody who is an animator or the scene conjurer/designer therewith. So, really the display should be customized based upon the production paradigm.

I'm sure much debate went into the crew ordering when the site was created 30 years ago.

What makes a great picture? The general public want's to know these things. But they have a prioritized list of what they perceive as most to least important. IMDb is geared up to list cast and crew in the order of the fans perception. In the industry, those in the know understand that the cinematographers (D.P.'s) are King! Directors rely on these individuals with the eye for framing! But sadly the general public is generally unaware of their real contribution.

But for the fan....It's Who Directed, Wrote and Starred in it First, Second and Third! And IMDb is attuned to the director and writer being first and second. Fans would want to know who starred first. So IMDb has already compromised there, from a fans perspective. 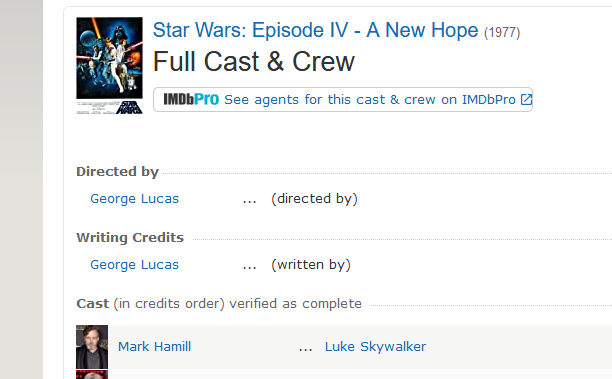 Fourth.....who made it happen. (Producers)

Followed immediately by #5....that great music. Songs that you'll remember for a lifetime.

Now 6th in the category of your concern. The D.P.'s.

So from a fans perspective. The list order is perfect. The order of importance should change to satisfy the industry? Or do you want the fan to have it listed so that it makes sense to them?

It is that simple.

And who's with you? Probably a lot of your brethren. But then if your on page 1, who's complaining next? Music. Grips. Stunts. The first page must remain uncluttered. Stars. Writers. Directors.