Different seasons of the same TV Series 'Svaty' have seperate entries on IMDb, but not able to merge into 1 entry

It seems piznajko (ur24424168) succeeded to add more seasons to the original Svaty [1] and to change the main poster to Svaty 6 there: 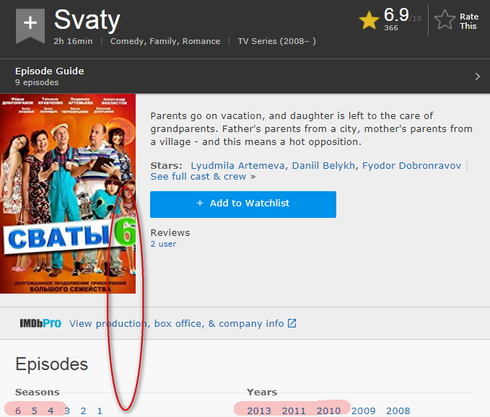 where the original title-poster (including no "6" or other numbers) had been before this discussion paused at some point:

EDITORS, please react on this.
Those who did these changes are not familiar with the content.
The changes are done without any objective proof.

MAthePA    please do not misinform IMDb community - TV series 'Svaty' is a six season (plus one NY special) TV Series. I have provided reliable sources that prove that production '95 kvartal' clearly labels this as a 6 season TV Series (see here and here)Please stop beating a dead horse! This is a 6 season TV series and no amount of your denialism can change that.

Hi Ed Jones (XLIX), thank you for your constructive critisism.I agree that current IMDb rules state that if the 'shorts' or 'mini-series' or 'films' are released seperately, they should remain as seperate entries. Based on your quote from Will above, it is plain that IMDb admins follow this logic and this is indeed how they currently interpret IMDb rules.I also want to point out that we should not compare oranges to apples. I'm sure there are indeed cases when a couple of TV movies or TV mini-series were released as standalone titles, albeit with some similar "theme". However, this is not the case here - Svaty TV Series is clearly labled as a 6 season TV Series by its production company "Studio Kvartal 95", quote from official production website:

One of our most popular television projects has been the comedy series The In-Laws (Svaty) – 6 seasons – which had unprecedented success not only in Ukraine but also outside the country. The series 3 times was voted as the best Ukrainian comedy TV Series in Ukraine with highest TV ratings. In 2012-2014, the series was nominated in Monte Carlo Television Festival as the series viewed by the largest audience on five continents, reaching the top three positions in the comedy category along with the Desperate Housewives and The Big Bang Theory

Furthermore, producer of this TV Series is the infamous comedian-turned-president Volodymy Zelensky  who has been the president of Ukraine since Aug 2019, and who included in his official presidential biography that he worked as a producer on a 6 seasons TV Series Svaty. A president of a country wouldn't lie in his official biography: e.g., if he stated that he worked on 6 seperate TV movies or TV mini-series, that would be one thing, but he stated clearly that he was a producer on a 6 seasons TV Series Svaty.

Following the logic of the comments, 50% of the series need to make separate pages. For example, the same American horror story and American crime story. Many series that were originally produced either as a miniseries or a one-season project, but then spilled over into a series of seasons and television films. I apologize for the flood, but since I’m talking about the Ukrainian series, can someone help make this out: tt4590496 - instead of a short page for the series, I just don’t know how to do it. Proof: 5baksiv.net Thanks.

Therefore, I wrote. I do not know how to do this, but maybe someone from experienced contributors can help correct this inaccuracy. Or is it necessary to create a separate topic for this occasion?