Delete my Name - I am not this actress

Hello,I need help. There is a short movie listed here that says, I'd be the actress played the role "Maria". But that's not true!! I have a really big problem with that claim, especially because the movie is called "Blow Job" and if you google my name, this is the first thing you see.
It is this short film: https://www.imdb.com/title/tt3305218/?ref_=nm_knf_t1I tried to delete or correct the data several times but IMDB doesn't change it and I don't know why.PLEASE - can anyone help me to delete my name from this list?The credits of the movie (proof) can be seen here: https://youtu.be/d2D1k7XYnZ4?t=350
Thank you so much! 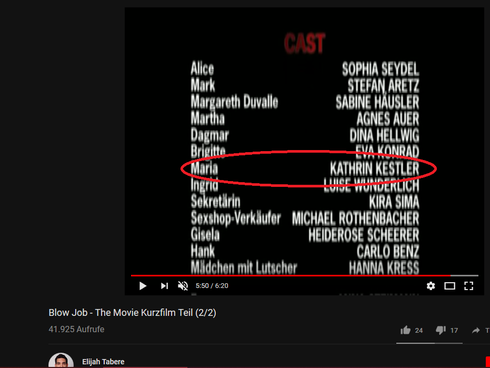 Hi Janine,I am not sure what happened in between and who did it, but currently, the IMDb page now shows Kathryn Kestler as playing Maria.

Hi Vincent,
thank you, that's great. It seems someone worked on it today.But WHO THE HELL added my name AGAIN? I DON'T WANT TO BE LISTED IN GOOGLE IN COMBINATION WITH THAT FILM TITLE!!!!I now manage a company and don't want my employees to see this and make jokes of their boss...PLEASE ANYONE HELP ME!

What do you mean "again"? Where?

For Google, you need to wait for a few days or few weeks for the index to be refreshed...

It's on the second page. Someone added the WHOLE cast today. Including the extras...

are these names, including yours, actually credited on screen?

Besides, you can always claim that it is an homonyme (there tons of them on the IMDb)

Unfortunately yes.
How can my name be deleted?

Someone added the whole credits today... this ruins my life!!!! It's not okay that my name is written in writing in the internet so you can always find it on google...

IMDb staff could identify who added these entries but they will not disclose it, and if the information is "factual", they will not remove it as per their policies.

If you are in Germany, there might be ways, as in France, to summon Google to remove the related entries. I suggest you to explore this lead...

Thank you, VIncent. I'll try this.

As you correctly says, the role of Maria is played by Kathrin Kestler, but there's some "Janine Lucidi" who's billed on screen as well (position #32). On 12 Feb 2017 the wrong character was assigned to "Janine Christine Lucidi": 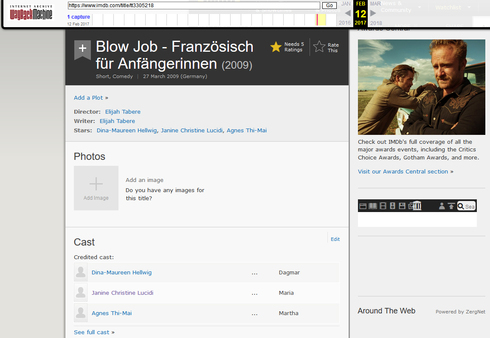 A simple Google search shows that this is not a common name, so it is unlikely that "Janine Lucidi" and "Janine Christine Lucidi" are two different people. The nmconst of "Janine Christine Lucidi" was nm6059462, which now redirects to Janina Christina Müller. That means that somewhere between 18 Feb 2017 and nowadays a name correction has been submitted and accepted, and this kind of change requires supporting evidence to be approved by the data manager and

won't remove factual information.However, as Vincent has explained, this "Janina Christina Müller" may very well be a namesake of yours. Or you may ask

to re-check the proofs which supported the name change in the first place.In any case, I think that the film is very funny (and if I understood German I had probably laughed even more

), so (understanding your position) IMHO there's nothing to be ashamed of...

Hi ljdoncel,so you are the one who's going on ruining my life...Let me explain. My name is as written on Number 32. I tried EVERYTHING to get rid of the entry and I also changed my name on IMBD because of that.As you said it is not a common name... there's only ME who's named like that and I can't claim not to be her. But I don't want my name to be written in the internet combined with this film title!!! You can't imagine what this entry does to me and how depressive this is... I even think of renaming me at the moment because of this sh*t f*cking entry that makes my life really hard at some points.WHY did you add the extras to the cast?? It could have been so soothing if you only changed the name of the actress of Maria. There is NO film I know where someone names the extras on the cast list.Besides, this film is only a student project and not a "normal" film. Tastes differ but that's not the point.

you are the one who's going on ruining my life..

That's taking things too far... Your name is publicly listed in a publicly released film that anybody can watch in the internet (over 40,000 views since 2008) (the year next to the title should be corrected, by the way)... I wasn't there 10 years ago to force you to participate in the film, I wasn't the director who included your name in the credits, and I wasn't the user who added "Janine Christine Lucidi" to

in the first place... but is it me who is ruining your life?. I've simply audited the cast list to reflect the on-screen credits and, as I've said,

won't remove factual information so, even if I had wanted to, I would not have been able to remove your name. Now Janine Lucidi appears "buried" among many other actors in the full cast page and, at least, is not as easily viewable as before (it no longer shows up in the main page of the film). You're welcome...

WHY did you add the extras to the cast?

Because, according to the rules, they're eligible to be listed on

There is NO film I know where someone names the extras on the cast list.

There are, literally, thousands of films in the

Tastes differ but that's not the point.

I'm just following up here to confirm that the information ljdoncel provided is correct, as your name was credited on-screen for this title, as per our policy, the credit will need to remain listed on the site.

The hyperlink to your forum user profile will still be indexed by the web crawlers, and the URL associated of that link contains your name, so it might not matter.

Or, Ijdoncel, could you PLEASE edit your entries replacing my written Name with "your name" or something like that so this conversation isn't listed in Google anymore when you Google my name. This would help me a lot.