Couple of questions about display in reference view

I've been experimenting with using reference view. It has a lot of info that I like but I wonder if there aren't a couple minor issues with writers in this view. Take a look at this example from Star Wars: Rebels. 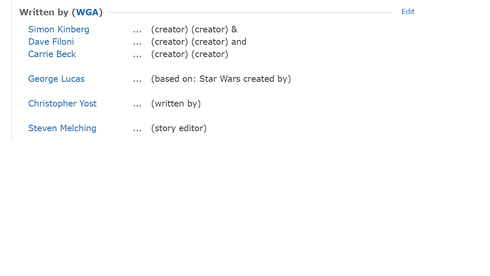 Should creator be listed twice? It isn't listed twice if you edit this episode. All three are credited with "created by".

Also, it says these credits were submitted by the WGA. I doubt that this is true as I most likely contributed these credits.

Thanks for highlighting this, please can you provide us a link to the page in the view you are using where you are seeing the credits listed twice and our data editors can look into this for you.

It's pretty much every page I've seen where the creator is listed twice and the writing are listed as WGA contributed (when they aren't).

Here is one example:

Thanks for the report I've cut a ticket to the relevant team.