The current cast listing Hellboy (the 2019 version) has a credited cast member listed as uncredited. I tried to fix this issue, but, of course, the edits were declined.As you can see, Douglas Tait is credited as "Graugach" and should be in position 31. This means everyone from Stephen Graham (current position 31) to Rut Rafailova (current position 41), need to move down a spot. Oddly, there is no one credited in position 42 so only these people need to move.Other minor edits are: Emma Tate should have the attribute "voice" (She is the voice of the character while Troy James provides the on set presence) and Zara McDowell should be credited as "Woman on the Street". (Why do edits for uncredited actors that solely correct the capitalization to IMDb standards constantly get declined?!?) 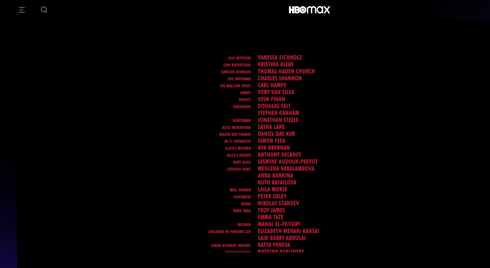 I know you usually do, but please make sure to include any submission references from your declined requests with your posts - this really helps editors get to the root cause of the problem and re-submit the data on your behalf if necessary.

I've managed to find the following reference 200531-041515-164000 - this looks looks to be a set of corrections for Hellboy, however this doesn't include any submitter comments to help the editor verify the request you're making is accurate.

If there aren't any other submissions, I'd encourage you to re-submit your request and include a submitter comment of the evidence you have (the image you've provided here should help) - an editor can take a further look for you!

Thanks for your support Adrian.

Why is it so hard to update movies? I make these type of changes on TV shows literally hundreds of times a day and have rarely needed screenshots.

Also, if we are going to be required to provide screenshots for virtually anything, is IMDb going to make it easier? Uploading to another site and then linking to it in the IMDb form is quite cumbersome. Can they implement a photo upload within the submission form itself?

Also, why should I resubmit it. The proof is here. Why can't you fixed it like has been the case for many years now?

Why did you mark this answered as it is not answered at all and not fixed at all? What is the point of this support group if you just deflect it back on us to fix again?

Also, there is no easy way to "resubmit" this with proof. It means I have to completely resubmit this request, including reordering a large part of the cast. That seems completely unnecessary as usually the IMDb can resubmit this and have it approved without me taking even more of my time to make a new submission.

I forgot that you can do this through the old contribution page by clicking on the submission. However, it won't let me resubmit the contribution for 14 days which is clearly a legacy thing that needs to be fixed. The system should be able to see that it was declined and allow you to resubmit with explanation.

I resubmitted these changes with the explanation pointing to this thread. All 14 were declined.

Two weeks and the cast of Hellboy is still incorrect and incomplete.

I've submitted your updates Adrian - thanks for providing and apologies for the incorrect rejection. I've passed some feedback on to the editor in question.