Hello!My feature Caretakers is a 2019 release. I am filing the movie's copyright this week. Deliverables are going to the distributor this week. It's actually not available to watch anywhere. The release year abruptly changed yesterday morning. Will someone from IMDb please change it back to the correct 2019? We played an early cut in a 2018 festival to 20 seats or less, which does not qualify as a world premiere.Just leaving this request #190923-200408-224000 to process when possible. Someone added a Netherlands release date which is also not correct, but I will go through with our distributor and update all territories and their release dates shortly.Thanks IMDb!

We played an early cut in a 2018 festival to 20 seats or less, which does not qualify as a world premiere.

However, the festival did list it as an East Coast premiere.https://www.buffalofilm.org/archive/2018/events/caretakers-w-headless-swans/

Hi @gromit82 - so BIFF did not play the full film due to tight scheduling and we jumped to a filmmakers panel discussion. As stated, the first full screening and official world premiere was at Jean Cocteau Cinema in Santa Fe.Thanks for your time.

George:I honestly wish you the best luck with your film... but it's sad, really sad, that you're doing this again (no surprise, however... but I thought you had learned the lesson).

Well, you decide how you treat your audience and the image of yourself you want to convey... (and no, distribution rights is not a valid excuse...). I've got nothing more to say...

Hi @ljdoncel, I realized I had made a mistake with the Bling Ring when you brought that to my attention, and I apologized immediately. What does distribution rights is not a valid excuse mean?

What does distribution rights is not a valid excuse mean?

It means that many filmmakers try to change the year next to their title (sometimes lying about past valid screenings) in order to make them look fresher before potential distributors.

OK. As my first post states, my film has distribution already through Cardinal XD and another company. The contracts are signed and that’s simply not the case. I don’t appreciate your approaching this with so much negativity. Did you see my apology about Bling Ring?
Here it is again below. And once again: I’m sorry I was wrong about the Bling Ring and thanks for sending me that! Not afraid to say sorry!! :)

I don’t appreciate your approaching this with so much negativity

I couldn't care less about The Bling Ring... Can't you see that the reason for my "negativity", the point of my message, is your lies about valid screening dates??

OK- here we go. @Ljdoncel, the purpose of these boards is to resolve matters. I noticed that instead of helping, you have actually added more incorrect information to the page. Queen Palm International Film Festival never showed our film in December. You have added false information to make this situation worse. Go to their page. They screen in the summer, and we didn't participate.

As stated BIFF was not able to screen the whole film. It was sad for us filmmakers, but things happen. Cannes was a private screening in Gray D'Albion and also under 20 seats as the film wasn't done - and for this very purpose. KIFF, also a similar under 20 seat private show.

I have a call with the BIFF festival director tomorrow to clear this up. I will perhaps screenshot his account of what happened. IMDb, please keep this chain open until that time.

You're correct about this (I'm very sorry). Your film was in the Official selection for the December edition of this quarterly event (you were even nominated for Best Actor and Best Screenwriter - congratulations btw)... 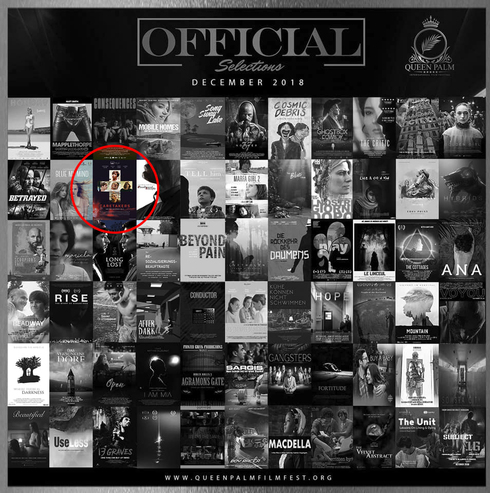 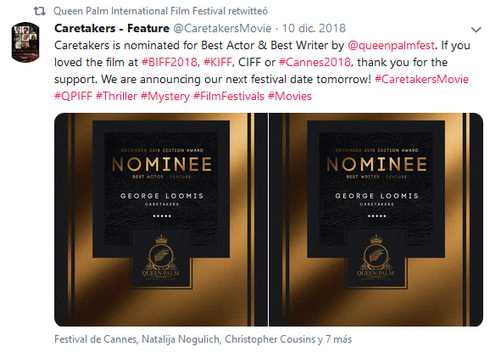 We played an early cut in a 2018 festival

We have gone from "a 2018 festival" to find out that your film was screened at "several festivals" in 2018 (Buffalo, Kansas, Covellite) and, as gromit has presented, the event webpages and your own Facebook account, refer to those screenings as "premieres".

Hi,1. Queen Palm is not a public screening. I appreciate your apology. Please remove your update. 2. Unfortunately, Covellite did not have the technology to complete the screening and although they tried, they did not have a BluRay player. We had to show parts of the film from Vimeo in a private hotel, called Hotel Finlen, and there was a glitch to even successfully do that. We are not in their program and were not eligible for awards. I can submit their program to anyone who needs confirmation. We attended as visiting filmmakers after unsuccessfully planning a world premiere there. (Your seizing on these failures is rather unkind).3. John Fink from BIFF is already handling this to describe what happened at Buffalo. It was supposed to be a premiere, but sadly it was not. They could not screen the whole film, and I was ultimately a visiting filmmaker.Though my film ultimately found success in festivals, there is a lesson here that it's been very challenging. Things have not gone according to plan, and premieres that were planned did not always reach completion. Luckily, we hit our stride and 2019 went according to plan.Please stop manipulating the film's information. I appreciate the apology but your messages are too aggressive. You don't know what worked and what failed. My film's team is not shaken by these plans changing. We made the best of it, and it's all good.Thanks again to @gromit82 and @Ed Jones XLIX for genuinely attemping to help.

I appreciate the apology but your messages are too aggressive.

Hard, but I concur... I guess your past actions and the fact that you were trying to change a correct release year led to me to adopt an improper passive-aggresive tone from the beginning. I apologize again.

You don't know what worked and what failed.

Regardless the difficulties at BIFF (which I still believe counts as a valid release date), Kansas is still there...

My manners were not the best in this case, but I'm just attempting to help the database by preventing a wrong year change. I don't manipulate the film's information (the Queen Palm date was a one-off mistake on my part which I've promptly re-updated as soon as I was informed of the festival's peculiarities) and I'm not trying to harm you or your film in any way.For the last time, (believe it or not) good luck!

You mentioned that your film was not screened fully at the Buffalo International Film Festival, however, please note that even if a portion/shorter version of the film was screened we will still consider this a release and will need to retain the "2018" Release Date and title year.

Thanks Michelle - you can reference the BIFF website to see that this was a "Special Preview" with a short film. So no we did not show the feature. It was originally planned as a premiere, but it ultimately was just a preview and a panel discussion. https://www.buffalofilm.org/archive/2018/events/caretakers-w-headless-swans/

Thanks for your time.

Thanks for the additional information.  Please note that even though the film was a "special preview" if it was shown in some capacity (even though it wasn't the full feature), since a version was screened we will need to retain the existing Release details.

Hi Michelle and @staff, kindly stop accepting edits from parties not affiliated with the film. As stated in my first post, it's not released in the Netherlands. And again- as stated- we will be posting correct dates directly asap. #190925-215901-322000

Ed thanks but save your time - the film is not in the Netherlands. I have said the same things since my first post opening this thread.

And I understand that people aren't censored as we were objectively attacked just for asking for assistance. It's good that this thread shows what kind of place this is. We know that it's a free for all.

Hoping Netherlands is off shortly and thanks again.

I can see that your request to remove the Netherlands Release Date was not accepted because you are contradicting information that was provided by another top contributor.  The existing Release Date is listed as an internet release.  To confirm, this title has not streamed or been available anywhere online in the Netherlands?

Hi, Michelle:I'm guessing that the Netherlands release date was likely added by the same contributor who sent the info about distribution in that country: 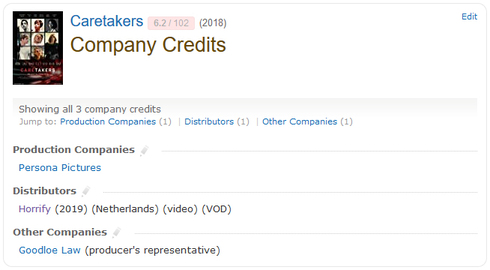 I've visited the Horrify.nl website and indeed they're offering Caretakers (2018)... 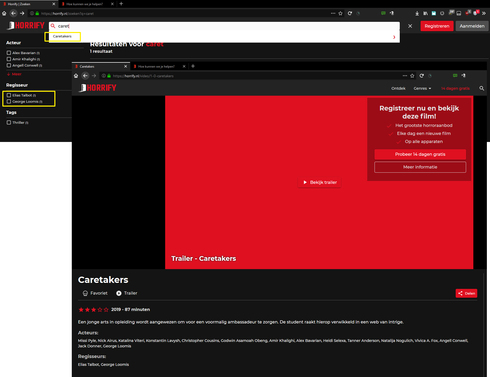 However, I can't confirm whether this is a legit VOD platform or not (I wasn't able to find online any evidence I could understand; if my English is fairly improvable, my Dutch is unexisting...). Since you're saying that the company was added by a reliable top contributor, I'll assume that it's ok... Nonetheless, Mr. Loomis must be warned of the fact that his film is apparently being streamed by that platform, just in case he wants to take the legal actions he deems appropriate...

block these release dates to prevent further manipulation and put a flag on whichever contributor made this? Thank you