I am a producer and I add episodes to IMDB. I used to be able to click to add another episode right after finishing one. Now I can't. Which means I have to go through several steps to get back to the episode list to add a new episode. Why did IMDB remove this functionality and can it be added back?

I'm circling back here to confirm that the "Edit More Info" button has been reinstated on the Contribution Confirmation page, clicking this button will redirect to the "Add New Episode" Title Form:

I can confirm that the "+ add episode" buttons are still displaying on the site for TV Series titles:

If you are not seeing this button displayed at the bottom of the title,  post the IMDb link to the title page and our staff can take a look for you.

I think James is referring to a button on the confirmation page after submission.

@Michelle  Yes, I see that page. But after I submit an episode, there's no longer just a button to add another. I have to navigate back to the show page and start over. Why remove the easy button to add the next episode?

Thanks for clarify (and thanks to Peter as well).  I am now able to see the issue that you initially reported for the adding the next episode button no longer being displayed.

I have filed a ticket with the appropriate technical team to investigate further, as soon as I have an update I will relay the information here.

Or even better, why can't we add/correct episodes in bulk?

And, why can't we add alternative titles to episodes?

Late last night I added a missing episode from 2019 (after finding out a local policeman and magician, turned TV producer worked on it as a producer), to a documentary TV series which has been going for nearly 34 years, and doesn't have typical series and episode numbers.

That series is on a network which rebranded a few years ago, and when they rebranded, they got rid of the original air dates for certain shows which aren't on a typical list type programme page (which are mainly for shows with series and episode numbers), for some reason.

As this is one of them shows, it means I have to find the original air dates elsewhere, which is also annoying, as Radio Times has been useless for original air dates, ever since they got taken over by Germans in 2017.

Broadcast (aka Broadcast Now) magazine which is or was normally the best place to get original air dates from, until they annoyingly started limiting the amount of stories you can read for free per week/month a few years ago, yet even they didn't have an original air date for this episode.

As most of the reviews were mainly within the same 3 day time period, the majority of which were on the same day, I had a pretty good idea of when it was first broadcast, however I read around 5 of the many reviews, and they didn't have an original air date either.

I finally found the original air date on the TV networks Facebook page, where they had advertised it with an extra subtitle added, yet that extra subtitle, does not appear on-screen, therefore this episode has an alternative title.

Someone seems to have added most of the 2019 episodes to IMDB, which they've clearly got from IMDB's rival websites like TheTVMD, TV Guide, TVmaze, next-episode etc.

Most of the 2019 episodes seem to be there at first glance, however as I've shown, not all of them were there, and there might even be more missing episodes from 2019.

That's another thing IMDB should add as an option for shows like this, the ability to add a year as a series number, rather than the standard season 1, season 2, season 3 etc.

Luckily this episode seems to be the 3rd last episode of the year, so if all the episodes for 2019 are there, it shouldn't be too much trouble to change the episode numbers for the last 2 episodes.

There's currently 84 episodes available on the TV networks website, from various years like usual, as they repost old episodes a lot.

Just having a quick look through them, and the episodes listed on IMDB's rival websites, it's clear that most of the episodes from 2020 and 2021 are also missing from IMDB and the other websites.

This is the type of thing we need... 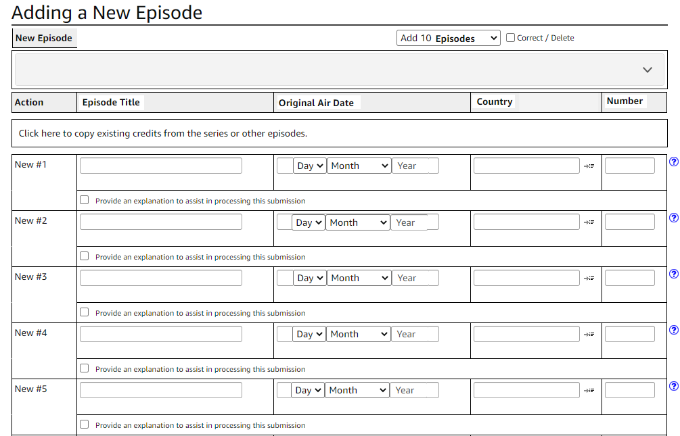 Thank you very much @Michelle !