Background / Extras are adding themselves

Background are adding themselves to big films and it is a HUGE epidemic that needs to be stopped. They make up titles for themselves like "pedestrian" but what is more damaging is that they ruin a lot of plot information for films not released yet. As a Film Crew member--we and actors who are cast in films work hard for our credits. And I've been background before! I wouldn't dare add myself as I'm just that. Background. What's next--adding Props to IMDb? They are also in the background.

I understand the frustration, however, please note that we do allow background work to be listed on the site the work is in-line with the following guidelines.

What do I need to do about a photo in a miniseries existing gallery that is not tagged and the stagecoach, horses and my spouse were not credited in the miniseriesvv

You're still technically playing a character, whether it be a pub patron, scared citizen running from Godzilla, a cop, tourist, or whatever it is. Some people play soldiers in a film, and are blurry on screen. But if you are clearly seen, that's okay for inclusion. So it's not a bad move to credit extras, as it's still a form of acting, but you need to have at least one credited role first, no matter how big or small that may be.

I've no previous CREDIT on a production but have still been APPROVED . Just waiting now to join the cast list on a new film.

As a background artist I've plenty of uncredited but FEATURED roles with dialogue. I feel it's an extremely arrogant attitude that Mairinna feels that us lesser folk (in her opinion) aren't part of the production and feels we're some sort of virus ? Or as she puts it ..... Epidemic ? She works in the industry but speaks of S.A folk as nothing.

I've read her text again ..... In my defense it does seem shes not happy with supporting artists adding an uncredited role ?

But yes perhaps I'm looking from the wrong angle

I realize this is regarding an old post... But Marianna is saying then that
LEGENDS: Paul Newman, Jean Harlow, Gary Cooper, and Hattie McDaniel (if she even knows who they are), along with current day STARS Brand Pitt, Olivia Munn, Gerard Butler, Tiffany Haddish, and Kelly Clarkson would have been better served by slinking off into a corner somewhere rather than turning their work as "mere extras" into massive careers. There are directors I know of today who have launched careers that began as "uncredited" crew members on major films. Are they supposed to leave that part off of their resume, so someone thinks they just floated down from heaven as you apparently think you did then appeared to grace us all with your presence? SURELY YOU JEST?! I think they have medication for that. You might wanna check!

Can IMDB please just ADD an "Extas" category?  That would really help solve the problem.

@ Marianna Here's the thing. I am a filmmamker. Everyone contributing to making a film is important to make film to its full fruition. It may be unreasonable to add every name especially when they are not identifiable in the end product.  But if you don't have a full room of people in some cases, you don't have a film. Having a IMDb page for extras, Can help those who took time out of there lives to support the efforts of the director. IMDb should have a 'extras' category. So if someone wanted their efforts known. There it is.

My uncle was a 'extra' on more movies and TV shows you could shake a stick at. Once he became famous for a few rolls, now a Icon, his fans and I are desperate to find him in these credits. Which IMDb lack. Imagine if Frank Sinatra was a extra at one point of his life? It it important when the rest of his career over shadowed that? No, people would love to see and know. My uncle doubled for Frank, no mention of Stunts, or Stunt Coordinator. My aunt doubled for Raquel Welch in the same movie she's not mentioned. So, bet your sweet bippy I will be adding my uncle in as any movie I know of because it's important. We need to continue writing the history of film.
https://www.facebook.com/EastCoastStuntmen/

I found this feed because I was a Extra with Whoopie Goldburge and Ted Danson. I made a lot of friends behind the scenes with key people, even got to use the steady cam used to shoot the film. So it's more than a 'credit' it's a listing of talent. It was fun for me to be in front when I'm usually running the show behind the scenes. And my pursuit is not acting. It's directing. But that was part of my 'filmic' life. And we are all connected. Peace Stacy Poulos
https://www.facebook.com/playbackvideo/ 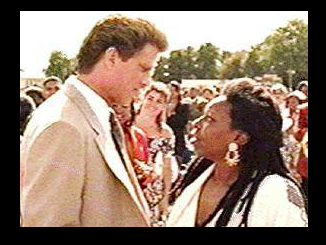 This is along the lines of what I was thinking. That everyone starts somewhere, and that when people become well-known it’s fun to look back at when they were starting out as ‘extras’. Absolutely.