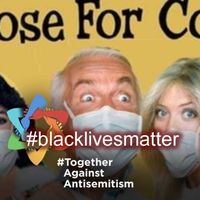 At the top of my page when viewing there's a trailer for a film I'm NOT in. I do not want anything SEXUAL like this porn and it's ruining my profile and my ability to get teaching jobs in my career. It is FAKE and I AM NOT EVEN IN THIS TRAILER and have never been in anything called "Honeymoon." Is there a way to remove it and replace it with one of my acting reels? I'm wondering why, it's the only one that's on my profile. I am not EVEN IN THIS TRAILER at all. I have written you but get no response. Since I am not even in his, I don't want this as the first thing everyone sees when they land on my profile page. I am paying for iMDP PRO and am up for a job with a University as a Professor. https://www.imdb.com/name/nm0003981/

to the university it does. I am not even in this trailer. I have created content and pay for IMDB pro and we never get any help from this site.

Hi, LydiaCornell.I'm sure the official representatives will come here to say that the current algorithm is not ideal and IMDb is working toward offering a better display selection in the future. While they are "toward", you actually have some options to control this situation, following the official guidelines:How does IMDb decide which featured video displays at the top of a name page? (link)The most important part is the priority order of videos to be at the top of your page:1. Videos related to the Known-For Title #1 (2, 3, 4...)3. Interviews 4. TV Programs 5. Trailers 6. Clips 7. Demo reelsAdditionally, there is a guide to manage the Known-For order:Known For title selection (link)Finally, you may address this problem directly:

If a video is incorrectly assigned to a name page, you may report these cases via our contact form selecting IMDb Fan/Contributor questions > Images & video > Remove/update videos and our data editors will be happy to take a look. However please note that any video change requests for the correct individual raised for purely stylistic reasons will not be actioned.

Thank you. You are the only comment that is truly helpful.  IMDB is the most clunky, user-unfriendly site. I'm on a book deadline, and have no business wasting time today on this but for years we (most of my friends and I) have been held hostage by IMDB.  Agents and managers demand that actors use this site and I have paid for the past 10 years, but IMDB has never helped any of us. They refuse to take our "age" which our union fought and won)  and they make is so hard to update our credits without jumping through hoops. Now a trailer that I am not even part of is the first thing employers see, as a content creator I never labeled all videos "Demo Reels."  How do you re-lable your work? There is only one Demo reel but it is actually called "HBO Curb Your Enthusiasm" etc.

Lydia, if you visit the "HBO Curb Your Enthusiasm" gallery, there are 8 (eight) trailers attached:https://www.imdb.com/title/tt0264235/videogalleryand this one is the primary for display:https://www.imdb.com/title/tt0264235/videoplayer/vi1225636121Those series is Known-For Title #1 on your page now. I recommend you to address this problem directly to the IMDb staff, using the contact form as described earlier. Good luck!Plus, maybe it's better to previously change the Known-For Title #1 to Full House -- what a lovely trailer there! ;)))Have a nice day, and let your book be blessed :)

Thank you but I'm confused. What do you mean I can upload another random Curb promo/  Why not my own?  I can't upload any videos except in the category "Demo Reel."  Fans upload whatever they want of my old work, and Full House was in the 90s. As a public figure, my manager put together the most recent work - original writing and directing which are in the Curb Your Enthusiasm Demo reel. I can't re-title it -- no matter what we do as members of IMDB PRO - we can't upload TV interviews or other trailers. They all must be uploaded as "Demo Reels"

God Bless you too :)

You did not upload the trailer for Isabel's Honeymoon Hotel, it was automatically attached to your name page. Logically, it should be a trailer for Curb Your Enthusiasm attached the same way but having priority  because the latter is Known-For Title #1 on your page.It was not attached automatically -- this is the reason to address this problem directly. I think, you need no new uploads to solve this problem. Or you may upload a related interview (if such exists), not a demo reel.

Lydia, one of your demo reels is titled as "interview", but it's not as such -- a home video like. An interview in the base of IMDb means: a person having a name-page should be interviewed by independent person addressing some questions related to a film (having title page).

I have now changed the slate on the video so that it is no longer displaying the sex-scene from the film.  as per the display logic of the featured video, please know that Trailers are automatically selected before Demo Reels, so this is why the Video trailer for "Isabel's Honeymoon Hotel" is displaying.

Thank you but I am not in this trailer and have never been in this movie - which is a mistake. It is not a promo for the failed Jeffersons spinoff "Isabel's Honeymoon Hotel' Why can't you post my own videos and trailers for films and TV shows I have actually been in? I pay a lot for the past 10 years as a member of IMDB pro. why can't you help us so people can see our actual work?

I want to quit my membership and most actresses (not actors lol :)  I know do too but we are held hostage by you, as the only site in our industry.

Thanks, Josie and Michelle. The initial problem is completely solved now.

The only medication I'm on is self-pity so I'm wallowing in it today. There are bigger problems in the world than IMDB. Thank you guys for your help. :) xo

There is no medicine like hope, no incentive so great, and no tonic so powerful as expectation of something tomorrow.

Lydia, hi!Congratulations! Your name-page is factual now. Your legitimate claim was not an empty allusion: 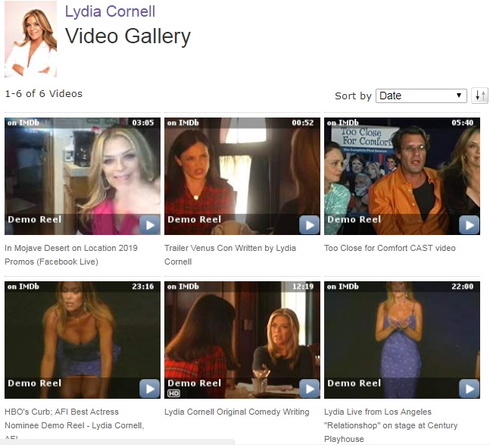 Wow, can't believe it worked! Thank you for your help. I really appreciate it. Yes those interviews should be up - but I have no idea how to include them. Are people allowed to put their own Youtube links up on their own page? Haven't figured out how to do it yet. If you know how and have time, feel free to link them. :) XOXO

Clicked on them but said “Error not found”

Strange. They work for me (those marked are direct youtube links): 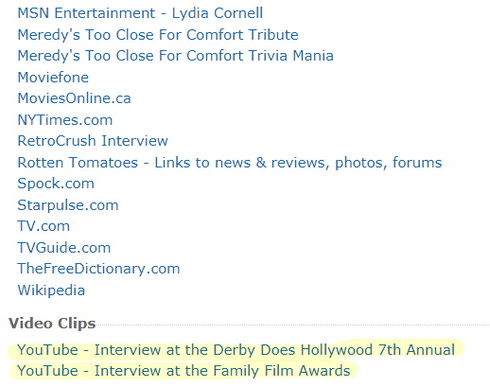 Forgive me for getting personal, but I just wanted to say that I had a huge crush on you when you were on Too Close for Comfort.

Steve, I appreciate your comments too. Are you also an actor?

I've done some live theater.  Strictly amateur, though, nothing professional.
I was an aspiring filmmaker once, but that didn't pan out, sorry to say.

It's never too late. I like John Cassavetes who made movies with his friends in his living room.

If you have something to say, keep making movies. There are so many outlets and distribution channels now :)

Thank you for the advice. :)

This reply was created from a merged topic originally titled On my profile is a trailer for a film I'm NOT in. Can you please remove and repla....

At the top of my page when viewing there's a trailer for a film I'm NOT in. Please help. Can you please replace it with a show I have been in or known for? I AM NOT EVEN IN THIS FILM or TRAILER and have never been in anything called "Honeymoon." I have done 250 TV shows and the one I'm known for is "Curb Your Enthusiasm" or "Too Close for Comfort," the TV series on ABC I co-starred in for several years. Is there a way to remove it and replace it with one of my TV acting videos and original broadcasts? The bizarre trailer you put next to my name has nothing to do with the 1987 TV pilot called "Isabel's Honeymoon Hotel" that was a spinoff of the Jeffersons either!  I'm wondering why, it's the only one that's on my profile. As a paying member of IMDB for the past 10-15 years, I have written you but get no response. Since I am not even in his, I don't want this as the first thing everyone sees when they land on my profile page. I am paying for iMDP PRO and am up for jobs that need to see my real work. Why do you work against the people paying you?  https://www.imdb.com/name/nm0003981/

To IMDB: Thank you for fixing this!

Lydia, I'm still unclear how it was fixed?  I have a Video Game Trailer next to my Pic, when I want my Demo Reel.  It's a Crazy Lemur from a VG I did, there's nothing I can do to get my video pushed in front.  Thanks for any Insight.

Hi, mattnolan888 .I presume that Lydia may be unaware of those specific steps. (Anyway, she is free to comment further on my words here :)LydiaCornell reported here that the main video attached to her page is not a title where she participated in and also she is not in the video itself.Such mistakes sometimes happen (less than 5%) because in majority of cases the videos are automatically spread between titles and then between the cast and crew involved in their production.In Lydia's case, the trailer for Lune de miel (1985) was mistakenly tagged to the title she participated in: Isabel's Honeymoon Hotel. Then this trailer was spread between the cast involved, including Lydia. How such could technically happen? Because Lune de miel is a Franco-Canadian movie having the alternate name "Honeymoon" in English, but the original name is in French as you see, so was not automatically recognized as a relative one._______________________mattnolan888 . Your case may be completely different, so it would be more effective to create a new thread and/or follow the above recommendations:https://getsatisfaction.com/imdb/topics/at-the-top-of-my-profile-i-am-not-in-this-trailer-please-use...Also, you may be interested to participate in a wider discussion on similar matters. I recommend this one as aimed at the heart of the problem:Treat videos like photos and allow tags for only the videos actor appears in_______________________PS BTW: can not understand why this thread is still marked as "ACKNOWLEDGED", while it should be "SOLVED".

Thank you, yes, it should be marked "Solved." Hope it stays that way. Interesting information.