Adding a rumored cast member to The Witcher

Hello people, hope you are well. I have been trying, twice, to upload the actress Gaia Mondadori to The Witcher (2019) as "Princess Pavetta". My first attempt was on the 4th Februrary 2019. Originally, there was a speculative rumour from an Instagram page from the user WitcherFlix which has, up to date, provided accurate insider information regarding the cast members and other details of the show. They later found out that she took a picture with one of the cast members of the show, Blair Kincaid, which was reported from the original post of the actress'es Instagram. In this post, she confirmed that she filmed with him.In more specific terms, her alleged character is based on the character portrayed by the other actor in the books, which is what the show is based.Regarding the "other works" sections, I primarily based that on the Curtis-Brown page of the actress.I believe all of this information should, at the very least, be sufficient to add her as a rumoured cast member in the section of the show! Thank you.

Concerning the credit, I can see that our editors rejected the submission because despite the Instagram post, we were unable to verify Gaia Mondadoir's involvement and cannot list information based on speculation.   Once her involvement has been confirmed, please re-submit the credit and our editors will take another look.

I can see that the "Other Works" data you submitted was approved and is now listed on her page: https://www.imdb.com/name/nm10451372/otherworks?ref_=nm_pdt_wrk_sm

I see. But doesn't this fit with the "rumour" attribute, since it is not 100% confirmed, but there is a large possibility that it could be true, since that type of attribute is typically linked with speculations? Thanks!

unless mistaken, IMDb does not register rumors anymore. The existing ones are just remainings and will end up being deleted.

Just to clarify, we no longer accept the credit attributes "Attached" or "In talks", but we do allow the "Rumored" attribute when applicable, for more details please see the following guide: https://help.imdb.com/article/contribution/filmography-credits/attributes/GJNF5SNFE43G4S22?ref_=help...#

The attribute says that "the information is unverified", yet you stated "we were unable to verify Gaia Mondadoir's involvement and cannot list information based on speculation". Seems a bit contradictory.

Rumors being unverified does not excuse them from being credible, I'd imagine.

Except the sources I have used have been credible so far.

Managed to figure out who is cast before Netflix acknowledges it with a high degree of accuracy.

Anyhow, instead of opening a new thread, I thought I'd note another two cast members which appear to have to joined the series.1). Mya-Lecia Naylor. Evidence- Instagram  + A now-deleted production image from her account: 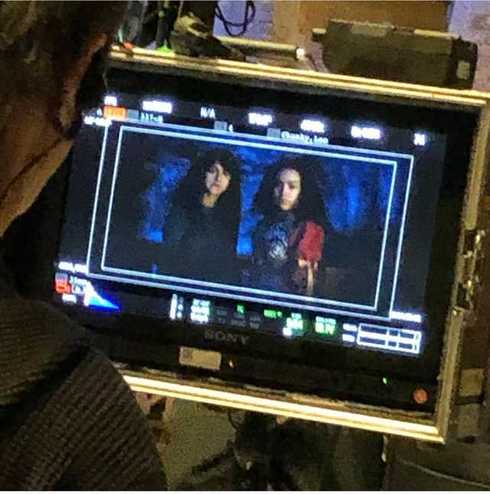 2). Máté Haumann. Evidence- An Hungarian News Article.I submitted these cast members yesterday (I think). Adding cast members to shows carries a "Platinum" priority, according to the processing page. So that means, in theory, it should already be updated now? Although to be fair, there are 269 unprocessed items in the category.Edit- Contribution #190213-224619-988000.

I reviewed your submission but noted that the credits have not been approved because they weren't properly formatted.  Please note that you will need to submit the cast credits to the applicable series episode that they worked on (instead of submitting them to the series as a whole).  You can find detailed instructions on submitting episode credits on the following Help guide: https://help.imdb.com/article/contribution/filmography-credits/how-do-i-add-an-episodic-credit/GRRHU...#

Please re-submit with the proper formatting and our editors will take another look.

I don't think that is currently possible, since that particular detail is not yet provided. Hence, I tried to use the "unknown episodes" feature, but wasn't sure how to. So I ended up submitted as a year range, even though the episode count is already provided. Besides, I already do know that some of the actor/actresses have been misplaced, since Millie Brady was only rumored to be in the first episode and not the rest of the season. Also, the character of "Istredd", played by Royce Pierrson, I believe had a minor role in the book, since he was mainly in a short story collection. So I don't think he'll be there for the entire season entirely. For those reasons, I assumed that this particular detail wasn't too important, compared to actually confirming the presence of the cast members on the show. 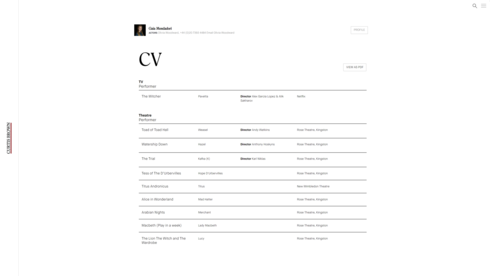 I reviewed your recent credit submission (190228-223805-336000) and noted that it wasn't approved because there were formatting issues, the same formatting problem regarding the previous submission referenced above.

To clarify, when there are episodes listed for a TV Series, you will need to submit credits to the applicable episodes that individual worked on, you should not be submitting the credit with a year attribute to the entire series.

So concerning your request to add Ms. Mondadori to the cast of "The Witcher", you will need to determine which episodes of the series she worked on and submit her credit to those episodes.  As mentioned above we have detailed instructions on submitting episode credits on the following Help guide: https://help.imdb.com/article/contribution/filmography-credits/how-do-i-add-an-episodic-credit/GRRHU...

My reply is the same as the previous reply. Such information is not yet provided and I already know that some of the cast members are already misplaced. Most of the people whom are unknown to which episodes they are attached to are either credited for all 8 episodes, or just attached to the pilot, which are probably both wrong. So in essence, why should me submitting an unknown episode count be rejected, which is an honest submission, compared to the probably incorrect already-submitted ones? Anyhow, I attempted another submission attached to an episode. Hopefully, this one works.

The reference for the latter submission (attempt) was: "#190301-135422-152000". Now, more people around the internet are talking about the confirmation. So I think, at the very least, this should be added, as I attached an episode!

Thanks for your response.

This credit has been approved to the episode now, please allow up to 24 hours for this to reflect on all platforms.

Thank you very much. God bless all of you people and have a nice day :)